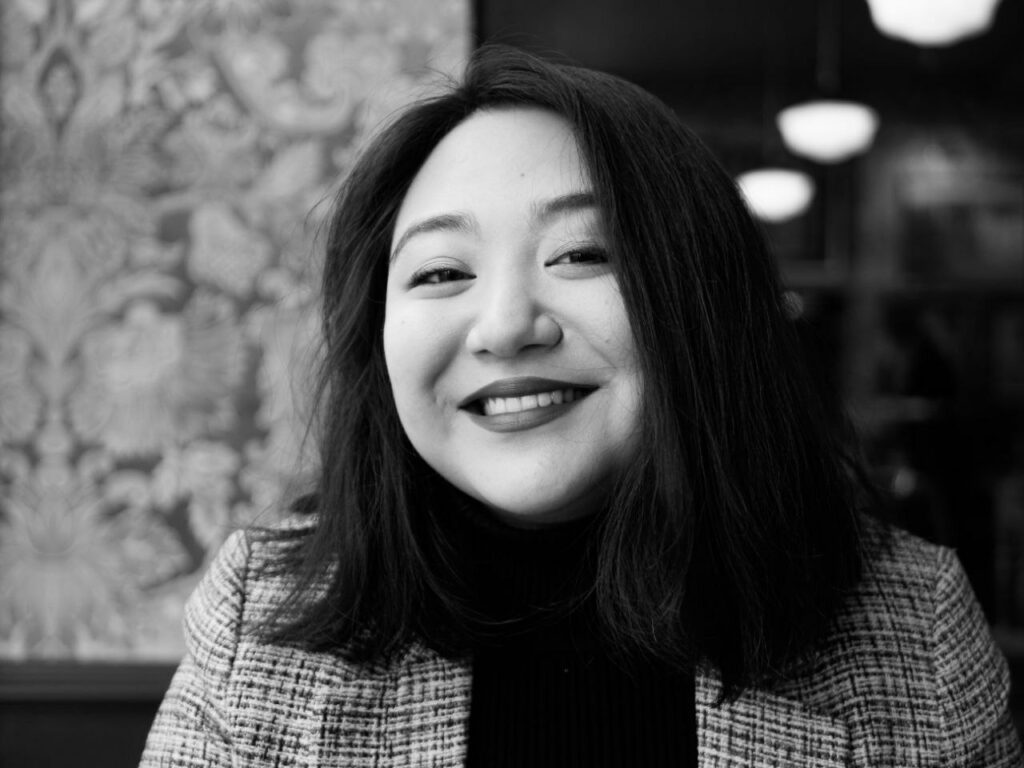 Nuclear Collateral Damage: a message from the host

For the last couple of weeks, you might have seen a lot of activity from my end, hearing my voice as much as twice a week. Maybe some of you have been wondering: “Who is this person?!’’ occupying Youth Fusion’s social media. I hope by today’s reflection post, I will clarify some of the questions you might have pondered over.

Youth Fusion has just recently launched a new podcast series called Nuclear Collateral Damage: Conversations with Survivors and Experts.  My name is Aigerim Seitenova, and I am the program host as well as  a Youth Fusion Program Assistant. This podcast is a result of the three months’ internship.

My initial aim with this internship was to put the voices of survivors, activists and experts from countries affected by nuclear weapons testing at the center of a project and highlight the continuous injustice people from such contexts have been facing for many years.

I come from Semey, formerly known as Semipalatinsk. I was born a little after the Soviet Union collapsed which marked not only the independence of our country but also the closure of the Semipalatinsk Nuclear Test site, which operated between 1949 and 1989.

Throughout 40 years, more than 400 nuclear weapons were tested at the Semipalatinsk test site. Of course, life in Semipalatinsk was not only defined by the nuclear testing – Semey residents try not to talk too much about the test site and its consequences, to instead emphasize the richness of our culture and the political stance of our people. Therefore, the younger generation knows less about our nuclear history because of the older generation’s hesitancy to  address the topic. As a result, proper reflection of this tragedy and nuclear legacy is yet to come. When I was at school we went to visit Semey anatomical museum which for us kids at the time was something exciting or fun to do, but which I now as a grownup understand as something that we should have been educated about and prepared to face to adequately reflect how it has always affected us, our relatives, neighbors, hometown and national fellows. Many of us have family members from regions especially affected by radiation, and discussing the nuclear legacy is far too often considered a taboo even in families experiencing their babies born with disabilities, cancer and other illnesses.

Being a kid and a teenager from Semey, I never planned to be active in the nuclear disarmament field. I dreamt of being an international lawyer and at 17 I moved to another big city in Kazakhstan to pursue education and a career in international public law. When I moved there, in addition to all the other stress factors related to student life, one of the moments when I felt uncomfortable was when my peers after finding out about my hometown made comments such as: “Do you have a tail?!” or “Are you luminous at night because of radiation?!” and so on. These bullying comments made me angry since it minimized the suffering and sacrifice of many people from my hometown and regions close to Semey. Notably, it was mostly addressed to me and other female students by male students, something which highlights an underlying gendered impact as it was ‘easier to attack’ women like myself and make fun of us if we g0t ‘emotional’ about it. After several such occasions, I understood that education might change the situation I was in so that the generation after me would not have to face this type of comment, instead challenging the dominant narratives of people only living in fear or being exposed to insanely big amounts of radiation s, and telling alternative stories of resistance, strength, solidarity and freedom.

At the end of the day, after 11 years, I have become a human rights lawyer who also learned how to respond to such ridiculous comments throughout all these years. For several years now I have also been active in the field of nuclear disarmament. Last year I learned a lot in general about nuclear disarmament and non-proliferation drawing on various sources, specifically focusing on nuclear testing programmes. I also strengthened my knowledge of the legal frameworks related to nuclear weapons and its kinship to human rights violations.

These have been some intensive three months, but sharing this mission with a team of like-minded people  has made it worth it a million times over. This podcast project has a two-dimensional value to me: 1) as a human rights lawyer, I was interested in how governments responsible for human rights violations ensure to fulfill their obligations in terms of remediation post nuclear weapons testing; 2) given my position as a third generation of survivors of the tests conducted by the Soviet Union.

Insightful and personal conversations with  survivors and experts

There are five episodes in the podcast series:

All five episodes are different and unique. Guests who had the time to dedicate to our podcast made every minute worth it and helped me to stay focused on my main aim and objectives: to bring such voices to the center, to highlight intergenerational impacts and see how and why countries are failing to make just decisions for the improvement of people’s lives. One theme in particular connects  many of the episodes, namely that of looking at nuclear testing from a decolonial perspective highlighting the particular nature of nuclear colonialism and the abuse of power by Western countries.

While conversing with our guests, I virtually traveled not only to the US, Marshall Islands, Fiji or Japan but I also traveled in time to see when, how and why the nuclear arms race began, including which major actors that initiated it and to what extent they acknowledge the destructive power of nuclear weapons today and how they justify the continued need for arms  despite sacrificing people and animal lives, ecosystems, the environment and our common future.

My conversations with our outstanding guests Tina and Livia Cordova, Miho Tanaka and Iku Nakamura, Dr Togzhan Kassenova and Yerdaulet Rakhmatulla, Ariana Tibon, and Mere Tuilau, not only inspired me but – as trivial as it might sound – also made me understand that I am moving in the right direction even though at times it is hard to see the results of my work. Each of the guests’ work and activism made me think of how people are so committed to accomplishing common goals for a peaceful future.

Each conversation led me to rethink my methods of work. For example the episode with Ariana Tibon from the Marshall Islands impressed me with the way that nuclear legacy education has been implemented  in schools, reflecting a highly holistic approach to education given its many aspects such as issues of forced displacement, testing period history, human rights violations, politics, geography etc. In my opinion, it is a great curriculum that I plan to read about in more detail very soon.

The episode with Tina and Livia Cordova made me emotional since the interview was very personal to them as someone whose family members across different generations got affected by cancer from the day the Trinity test was conducted. People from New Mexico are still fighting to get compensation and healthcare assistance until this day, as RECA (The Radiation Exposure Compensation Act) does not cover them and moreover it would probably expire this July.

The third episode of the podcast was equally emotional to me since it is about my hometown. Once again I had thoughts about my identity as Kazakh and as someone who was born near to the former nuclear test site. It made me think whether my people have received justice for their suffering.  Again, I personally think that justice has only been served partially and only as a result  of the transnational movement ‘Nevada-Semipalatinsk’, the efforts of activists, advocates and politicians at the beginning of our independence.

Miho Tanaka and Iku Nakamura from the second episode, focusing on Japan, showed me how to be active in the nuclear disarmament field by engaging with parliamentarians and voters, for instance taking into account social media outreach.

Last but not least, the fifth episode with Mere Tuilau from Fiji showed me the perspective of veterans who worked at the British nuclear test site. I learned how Fijian soldiers were treated differently in comparison with military staff from the UK. Still to this day they have not received compensation which in my opinion reiterates the UK’s failure to admit their wrongdoings and ensure a fairer decolonisation process.

While working on the project, I learned new sets of skills such as how to edit podcasts or work closely with image and video editing platforms.

In addition to collaborating with guests and researching each country’s nuclear legacy, one of the highlights of the internship was the Youth Fusion Team. Each member of Youth Fusion despite long distances and different time zones supported me in one way or another, making the experience of this internship one of being in a safe and equal environment. Being in a team of like-minded individuals where there is no ageism, pressure and more of a horizontal structure means a lot to me and my personal growth.

The podcast project is a collaborative work of so many people: each invited guest speaker, each member of the Youth Fusion team, every author of the different articles I read while preparing, online bloggers I watched to learn how to use different software, and most importantly, every survivor in the communities affected by nuclear tests, contributed to the development of this project. Without them, the project  would not have seen the light of day. Therefore, I am extremely grateful to everyone involved.

The last thing I want to say is that I have come to an understanding that making voices heard is definitely not an easy task, but it is something that with the effort of many people can be achieved. Nuclear abolition seems impossible to accomplish but I believe that with the effort of our and even younger generations added to  the tireless work of the activists and advocates of previous generations, there is great potential to succeed. For a lot of people, this may sound naive, but for me it is not only about a mere hope; it is about comprehensive and holistic steps and actions which have to be taken to revise strategies, create new ones and to try to continue the fight for justice and not give up.

This podcast is about people, about tragic events, about history and lessons which have not been deliberately learned. And as I mentioned earlier, this podcast is also about resistance, the power of people, strength, relentless hope and decades of activism, and last but not least, it is about the solidarity which keeps the fight for justice alive.

If you haven’t listened to the podcast series yet, make sure to visit this link 🙂