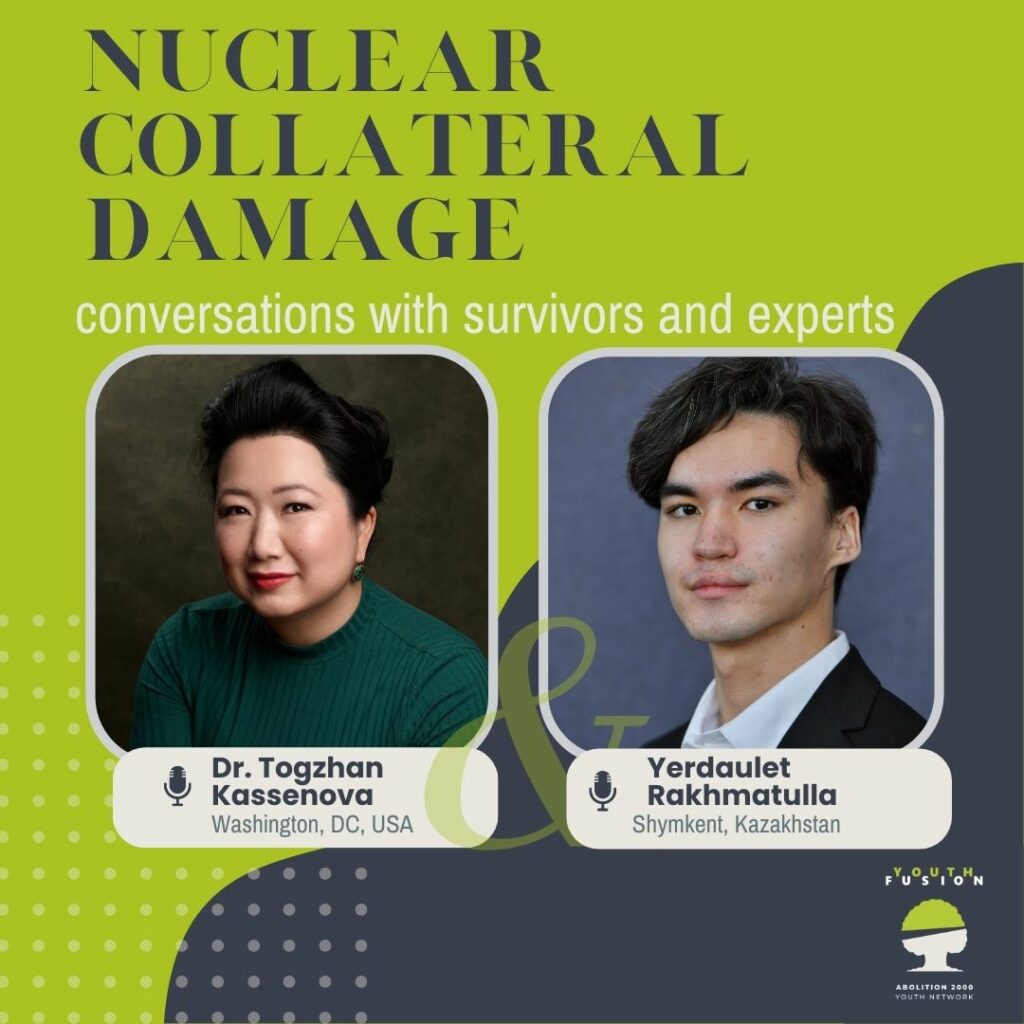 This is the a summary of Episode 3 of of the podcast series, Nuclear Collateral Damage: Conversations with Survivors and Experts, where Youth Fusion had conversations with Dr Togzhan Kassenova, an expert in nuclear politics, WMD nonproliferation and the prevention of financial crime, and Yerdaulet Rakhmatulla, a youth activist from Kazakhstan. In this episode, Dr Togzhan Kassenova and Yerdaulet Rakhmatulla shared the importance of Kazakhstan’s role in the nuclear disarmament field that marked the history of the country from the very beginning of its independence. The impact of their nuclear legacy on the national identity of people from Kazakhstan and the role of activists from previous and younger generations will also be discussed today.

Dr. Kassenova is a Washington, DC based senior fellow with the Project on International Security, Commerce, and Economic Statecraft (PISCES) at the Center for Policy Research, University at Albany – State University of New York, and a nonresident fellow in the Nuclear Policy Program at the Carnegie Endowment for International Peace. She currently works on issues related to proliferation financing controls, exploring ways to minimize access of proliferators to the global financial system. Dr. Kassenova holds a Ph.D. in Politics from the University of Leeds and is a Certified Anti-Money Laundering Specialist (CAMS). From 2011 to 2015, Kassenova served on the UN Secretary General’s Advisory Board on Disarmament Matters.

Dr Kassenova is the author of the book, Atomic Steppe: How Kazakhstan Gave Up the Bomb, which has been recently published in February 2022.

Mr. Rakhmatulla is a multilingual youth leader from Shymkent, a city in the South of Kazakhstan.Mr. Rakhmatulla is interested in youth policy, preventing violent extremism, gender equality, and nuclear non-proliferation. In 2019, he graduated from the Human Rights School organized by the Youth Information Service of Kazakhstan. It led him to observe the Presidential 2019, and Parliamentary 2021, Elections. Last year, Yerdaulet graduated from the Young Leadership Program by the Friedrich Ebert Foundation, Kazakhstan and Preventive Diplomacy Academy under the UN Regional Center for Preventive Diplomacy for Central Asia. In the summer of 2021, Yerdaulet joined the Comprehensive Nuclear-Test-Ban Treaty Organization (CTBTO) Youth Group and engaged in their citizen journalism workshop series. During his internship at the Friedrich Ebert Foundation Kazakhstan, Mr. Rakhmatulla co-organized their Nuclear Non-Proliferation and Disarmament Summer School in Astana (Nur-Sultan) for students, nuclear scholars, and young leaders.

From 1949 to 1989, the Soviet Union had been testing nuclear weapons and conducted over 400 tests in Semipalatinsk (now called Semey), the city in the East Region of Kazakhstan. As Dr. Kassenova noted, the reasons to choose Semipalatinsk were both technical and practical because the Soviet military looked for a place which would have easy access to construction materials and to transportation links. The geology of Kazakhstan’s flat steppe, as well as Semipalatinsk being remotely far away from Moscow, the capital of the Soviet Union, were also considered to be other reasons for building a test site in that region. The Soviet documents  described the region as uninhabited, which was completely not true because there were rural settlements right on the territory that became the Polygon. Furthermore, the main city of Semipalatinsk was 100km away from the test site.

The Semipalatinsk  Nuclear Test Site was officially closed in 1991, with tests being stopped in 1989 as a result of nationwide, and thereafter a transnational, movement called Nevada-Semipalatinsk. In 2009, with the initiative of the Government of Kazakhstan, the 64th session of the United Nations General Assembly on the 29th of August was declared as the International Day against Nuclear Tests. This can be considered as a significant achievement of Kazakhstan’s foreign policy, which is directly connected to its nuclear disarmament stance since gaining independence from 1991.

Giving up nuclear weapons and reflections on national identity

Back in the beginning of 1990’s, as a new sovereign state, Kazakhstan was left with many issues to solve- the existing nuclear arsenal being one of them. Giving up nuclear weapons was not an easy,  but was a very much necessary decision. Moreover, this was the only right decision to make in order to build Kazakhstan’s role as a country that condemns nuclear weapons as a weapon of mass destruction. Both Dr. Kassenova and Mr. Rakhmatulla share the same view on the righteousness of this decision since giving up its nuclear inheritance was also for a set of benefits that the country received from the international community, such as recognition or foreign investments that laid the foundation for Kazakhstan’s sovereignty, independence and statehood.

The nuclear tests have affected the lives of thousands of the Semey region’s inhabitants and of downwinder regions as well.  The existing national law adopted, in 1992, on assistance for the victims of Soviet nuclear tests provides some benefits, such as medical treatment and additional paid vacation, and social benefits for those who were born before 1989. However, the law is outdated and needs to be amended and revised, which is now happening in the Parliament.  At the same time, Russia, as a successor of the Soviet Union, doesnot bear full responsibility towards remedies related to former nuclear test sites’ survivors, and is not providing any types of reparations to the  people affected from Kazakhstan, but only to the veterans and victims who have Russian citizenship. At the moment, the services provided by national institutions are the only avenue to claim for assistance by victims. Thus, survivors and Kazakhstan’s Government have to ensure they are adequate and sufficient towards meeting their needs.

As mentioned  earlier, Kazakhstan gave up nuclear weapons in the light of its independence. This has followed the reflection of the tragedy which was heightened by the aftermath of the nuclear tests and, therefore, contributed to the foundation of national identity as well.  As Dr. Kassenova noted, unfortunately, there has been a lack of full self-reflection of the tragedy linked to the nuclear legacy of Kazakh people.The younger generation knows very little about the nuances related to the nuclear history of Kazakhstan.  Mr. Rakhmatulla echoed the same sentiments,  and believes that the level of awareness about the negative impacts and the threat of nuclear weapons testing among the younger generation of Kazakhstan is low, and  it feels as if the topic is a taboo and cannot be discussed more openly Therefore, the consequences of radiation and other horrible actions that happened during Soviet times still have not been fully resolved by the current Government. Moreover, Mr. Rakhmatulla highlighted that the issue should not only be of concern to the people from Semey, but also people from the other regions and other countries should know the devastating impact of the nuclear weapons testing and stories of people from Semey, which embed symbols of resilience and strength.

The historical movements, the role of youth and education

The importance of the 1989 anti-nuclear movement  in the early years of independence was one of the key components of nation building with a strong anti-colonial component towards reclaiming the agency of Kazakhs, who were suppressed under  the Soviet regime. Young people now learn about the Nevada-Semipalatinsk movement from textbooks at school. This is how Mr. Rakhmatulla found out about the Semipalatinsk nuclear test site,  but as he stresses, the history of the Polygon was covered briefly at the end of the academic year, and as they were children, they did not  have the understanding of  the full scale of the impact and legacy of that movement and historical events at that period of time.

Dr. Kassenova emphasizes that better education in providing school and university curriculums with comprehensive history of the nuclear legacy of Kazakhstan should be implemented to address collective trauma in addition to informing young people on the government’s nuclear diplomacy. Mr. Rakhmatulla notes that there should be an increased nuclear security literacy among young people in order to avoid repetition of such kinds of events in the future since some  young people do not support the idea of a nuclear free state due to current political events, such as the current ongoing Russian invasion of Ukraine. For that reason, young people have to educate themselves and others on the importance of nuclear disarmament education, and be advocates on the national and international levels for peace building and nuclear disarmament purposes. Moreover, Mr. Rakhmatulla stated that there are many bigger tasks before the younger generation to acknowledge and act upon the importance of the connection between environmental devastation and nuclear weapons testing, among other emerging issues, which have to be discussed more about and  not neglected  in order to ensure a better present and future.

The modern history of Kazakhstan is important to evaluate through different lenses. It is no doubt that nuclear policy has been a cornerstone of each chapter of Kazakhstan’s independence. In addition to that, the personal stories and the cost that thousands of Kazakhs who suffered from the nuclear testing have to pay cannot be left ignored. It has been a human cost where big powers equipped with ignorant hegemony were competing among themselves by putting lives, lands, and ecosystems at stake without acknowledging the impact of nuclear weapons in the past and in the present.

If you still have not checked out the 3rd episode of this series, follow this link to listen to it and we hope you enjoy our conversation with Dr. Kassenova and Yerdaulet Rakhmatulla.