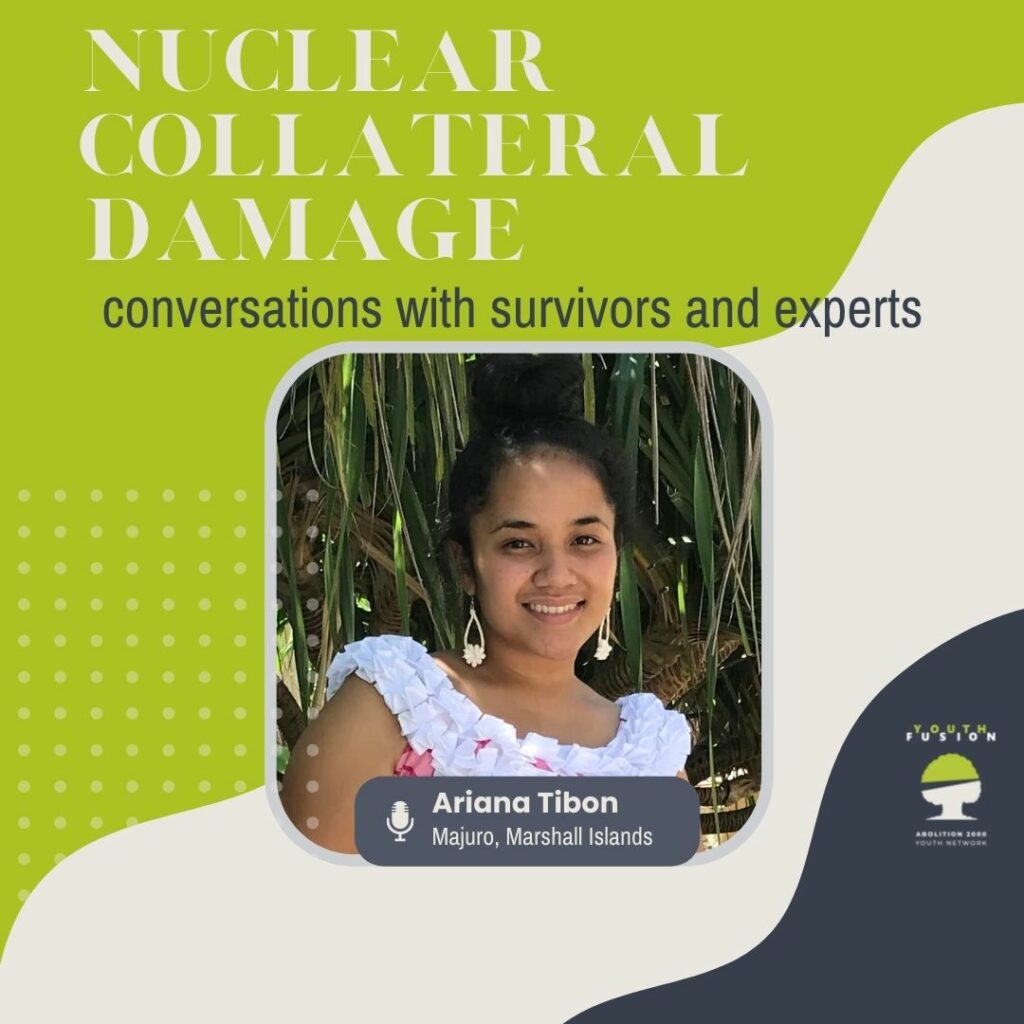 This is a short summary of the fourth episode of the podcast series, Nuclear Collateral Damage: Conversations with Survivors and Experts, where Youth Fusion conversed with Ariana Tibon, a nuclear justice advocate from the Marshall Islands. In the episode, Aigerim Seitenova, the host of this series, explores the historic background of the nuclear tests in the Marshall Islands conducted by the US which is closely intertwined with the colonial past. Highlighting the kinship of nuclear legacies with colonialism, the interview draws extensively on the forced displacement of the indigenous communities, the negative impact on the lives of thousands of Marshallese, and the lack of adequate reparations marking the 70 years since the tests were conducted. In order to not leave behind the traumatic past of the Marshall Islands, Ariana Tibon as part of her activism and in cooperation with other institutions, successfully contributed to the development of nuclear legacy education which we will discuss today.

Ariana is a descendant of survivors of the catastrophic Bravo Shot that was detonated in the Marshall Islands. Currently, Ariana is a newly appointed Commissioner at the Republic of the Marshall Islands (RMI) National Nuclear Commission (NNC) where she joins Chair Alson Kelen & Co-Commissioner Dr. Holly Barker. Ariana holds a bachelor’s degree in Political Science from the University of Hawai’i at Manoa, and at the moment resides in Majuro where she works with students and youth to encourage engagement in nuclear dialogue.  Ariana has also been working closely with the RMI’s Public Schools System where she helped create a curriculum that would teach students about the nuclear legacy.  She also co-teaches a Nuclear Issues in the Pacific course at the College of the Marshall Islands.

The forced displacement of Marshallese communities as a result of nuclear testing: the background story

In 1946, a large number of the US military  personnel arrived to Bikini with their equipment and machinery, and people from Bikini atoll were forcefully displaced to Rongerik atoll. Scared people of Bikini had no choice but to agree to be relocated to Rongerik, which at the time was uninhabited with no adequate living conditions where, as the result of relocation, communities suffered severe famine. After some time, the US moved people from Bikini atoll from Rongerik to Kwajalein atoll, and afterwards some people were moved to the small islands Kili and Ejit.

In 1947, the US decided to establish the second test site in the Marshall Islands at Enewetak atoll and people had to  move from there to Ujelang atoll. Two other atolls, Rongelap and Utirik, were close to Bikini, and during the Castle Bravo test, the US determined these two atolls as downwinders of the test despite the fact that other close atolls were affected as well. The US evacuated people of Rongelap and Utirik only three days after the test and by that time people were already suffering from headache, stomachache, severe nausea, blisters on their bodies and loss of their hair and fingernails.

Arrival of people to Kwajalein atoll after experiencing the effects of the Castle Bravo test, the US military personnel started project 4.1 titled “The Study of Response of Human Beings Exposed to Significant Beta and Gamma Radiation Due to Fallout from High Yield Weapons”.

Being the test subjects of this study, the people of Rongelap and Utirik atoll would be monitored during a  three month period. Part of this study was to collect blood and urine samples three times a day and undertake bodily assessments in the lagoon by the personnel, to measure ionizing radiation by the Geiger counter. After three months of being a subject of the study, people were moved back to Utirik without any environmental remediation done on the atoll. The people of Rongelap, which had a higher contamination rate, were moved back three years after the Castle Bravo test. Despite a petition of Marshallese people to the United Nations in 1954 after the Castle Bravo test, the US continued tests for the next four years.

After the test and independence of RMI

After declaring self-governance in 1979, Marshall Islands started negotiations with the US on recognition of their country as an independent state which led to the development of the  Compact of Free Association Agreement (COFA). The agreement, which entered into force in 1986 and has been amended over the years,came into being as an extension of the US–UN territorial trusteeship agreement, which obliged the federal government of the United States “to promote the development of the people of the Trust Territory toward self-government or independence as appropriate to the particular circumstances of the Trust Territory and its peoples and the freely expressed wishes of the peoples concerned”. Under COFA, the US federal government provides guaranteed financial assistance administered through its Office of Insular Affairs in exchange for full international defense authority and responsibilities. Furthermore, the U.S. is also obligated to provide financial assistance and compensation to the people of the four atolls that were directly affected by the US nuclear weapons testing program i.e. Bikini, Enewetak, Rongelap and Utirik.

In 1987 under COFA and as a result of the injustice experienced by Marshallese, the Nuclear Claims Tribunal (the Tribunal) was established to hear cases from survivors of the nuclear tests. The tribunal that aimed to adjudicate and pay nuclear claims was only able to compensate a small fraction of the damages it awarded before it ran out of funds and ceased its work. In current dollars, the total amount of unpaid damages awards issued by the Tribunal is approximately a little over 3  billion US dollars.

Ms Tibon noted that the people of the RMI have not been fairly compensated for the damages they have suffered because of the US nuclear testing program in RMI from 1946 to 1958. Former US Attorney General Dick Thornburgh concluded that the amount provided by the U.S. under the original U.S.-RMI Compact of Free Association to redress damages caused by the tests was “manifestly inadequate.”

‘The overall health of the people has been drastically altered as a result of the nuclear weapons testing program and left them with no choice but to be survivors and advocates for each other shaping their values in understanding nuclear legacy because of the trauma associated with the past. This history has scarred many families and, naturally, they’ve withdrawn from speaking up about these issues. However, there are a certain few, who have weathered the storms and have been vocal since the very beginning and continue to be advocates for the voiceless. With the nuclear legacy being integrated into school curriculums just recently, it will now be up to our youth and the younger generations to educate the older generations such as mine who missed out on this important piece of history and had to learn it ourselves.’

Ms Tibon has recently become a Commissioner and Nuclear Envoy to the RMI National Nuclear Commission where before she was as an Education and Public Awareness Director for several years. The RMI National Nuclear Commission was established in 2017 to coordinate the government’s need to address ongoing, unresolved issues and challenges arising from the U.S RMI nuclear testing program. From 2019, 73 years after the beginning of the nuclear legacy of the Marshall Islands, nuclear history will be taught in their public schools system and integrated into the Social Citizenship Education curriculum. This achievement is the direct result of the collaborative work of Pacific Community (SPC), NNC and the Marshall Islands Ministry of Education and Public Schools System.

At the moment, the curriculum is being piloted from 5th to 12th grade and reflects quite a comprehensive outline utilizing human rights based approach to teach about the nuclear legacy of the Marshall Islands. It starts with geography, such as the basics of where the bombs were tested. Then as the grade level goes up, more information is added where students get to learn about the forced displacement of communities and the many hardships that they had to face as they were being relocated. By the time the students get to high school, they would start learning about the politics at the time and the UN-US Trust Territory of the Pacific. Until 2019, nuclear legacy education was not included in school curricula which caused a generational gap of knowledge regarding the nuclear legacy, and Ms Tibon, as part of NNC, is doing all she can now to engage youth as much as possible because her generation and the generation before  were never really made aware of this history.

It is important to note that Ms Tibon has largely contributed to the development of such a curriculum through her work and commitment to nuclear legacy education. Education and awareness is one of the five pillars of the RMI NNC’s Strategy for nuclear justice which encompasses four other pillars as well, such as:  Compensation, Healthcare, Environment, National Capacity,  Education and Awareness. To learn more about the strategy, follow this link.

As the expert responsible for Education and Awareness who has been working on nuclear legacy education, Ms Tibon proposes that there should be a global curriculum which has to be implemented in all countries and would reflect her opinion that the ‘use or test of nuclear weapons is not worth it’. Ms Tibon thinks that through global nuclear education everyone should know that the Marshallese sacrificed their own peace and health to maintain global peace.