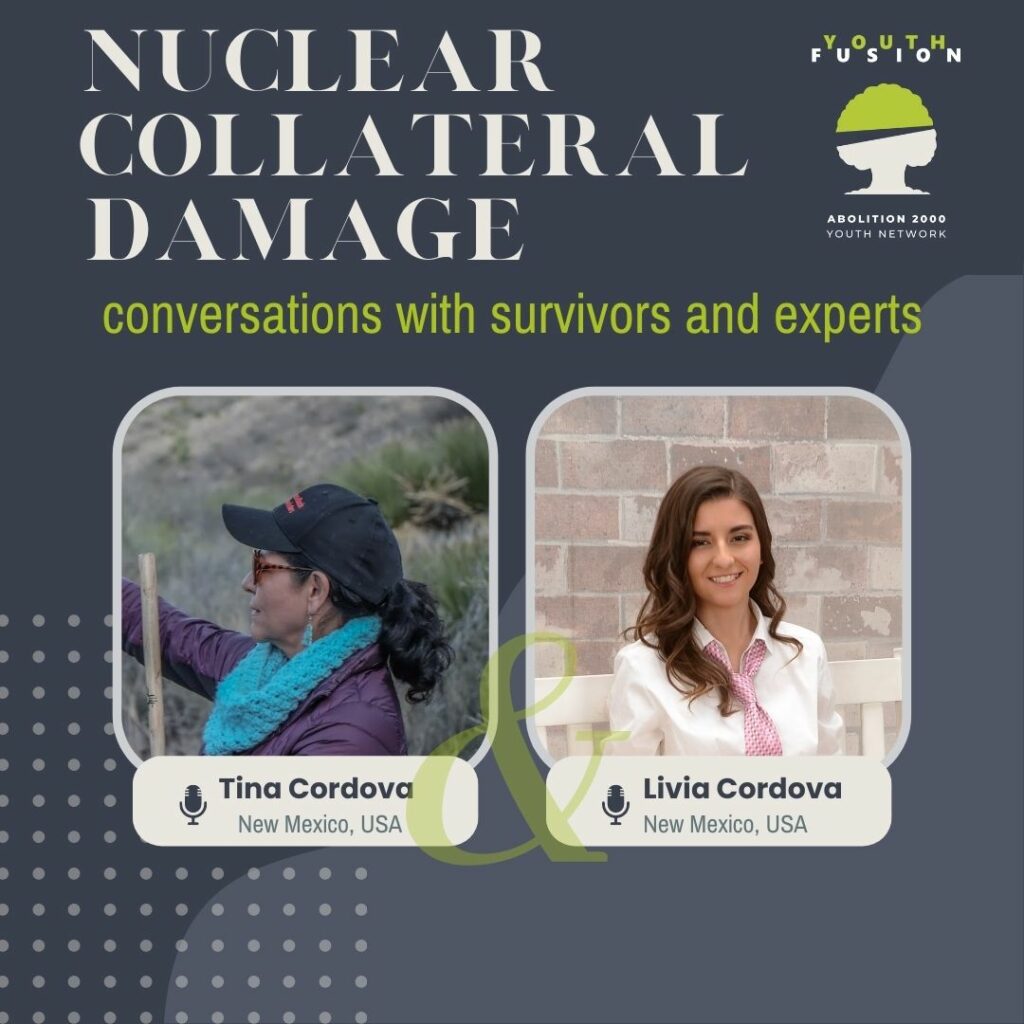 In the first episode of the podcast series, Nuclear Collateral Damage: Conversations with Survivors and Experts, Youth Fusion spoke with Tina and Livia Cordova, activists and advocates from New Mexico, USA. The episode was divided into Part I and Part II, wherein the host of this series, Aigerim Seitenova, investigates the negative implications related to the Trinity Test, which was the first nuclear weapons testing carried out in the US that took place in South Central New Mexico.

The mission of the TBDC is to bring attention to the negative health effects suffered by the unknowing, unwilling, uncompensated, and innocent victims of the first nuclear blast on earth that took place at the Trinity site in South Central New Mexico. Ultimately, the goal is the  adoption of the Radiation Exposure Compensation Act Amendments to bring much needed health care coverage and partial restitution to the People of New Mexico, of whom have sacrificed and suffered with the negative health effects of overexposure to radiation since 1945. Tina is a cancer survivor, having been diagnosed with Thyroid cancer when she was 39 years old.

In her role as an advocate, on behalf of the TBDC, she has testified before the US Senate judiciary Committee, the Senate Committee on Indian Affairs and the House Judiciary Subcommittee on the Constitution, Civil Rights and Civil Liberties.

Tina is of the fourth generation in her family to have cancer since 1945. She is not only a downwinder of the Trinity site, but also of the Nevada Test Site. Tina’s two great grandfathers, who lived in Tularosa 10 years after the test, developed what they were told was stomach cancer at a time when no one had heard the word cancer in our community, and both died in 1955. Both of Tina’s grandmothers had cancer, and two of her grandfathers died very early in life. Tina’s dad developed three cancers that he didn’t have risk factors for, except that he was a child living 45 miles from the test site at the time of the detonations. Tina and all members of her family had, or still have, to undergo regular cancer screenings. Unfortunately, this is the ‘normal routine’ of a lot of people from Tularosa.

When Tina was in college, she realized that the reason  why so many people were sick  was likely caused by their overexposure to radiation. This led Tina to begin her journey to start the Tularosa Basin Downwinders Consortium (TBDC).

Tina’s work is focused on bringing justice to the survivors of the nuclear test from Tularosa and to include downwinders into the compensation scheme under The Radiation Exposure Compensation Act (RECA). Despite residents of Tularosa suffering from the negative health impacts of the Trinity Test, they have never been qualified for compensations under RECA. In addition to that, there is a lack of accessible healthcare coverage and services, including screening and treatment of cancer and other illnesses for Tularosa residents who have to travel to other places and  spend a huge amount of money to receive such services, thus deteriorating the lives of many people. Today, Tina, her colleagues and people in Tularosa live in fear and panic due to the scheduled sunset of RECA on July 10th 2022, which might stop the progress of Tina’s life mission where she has been relentlessly fighting for justice for so many years. Tina’s goal has expanded from not only advocating for inclusion of New Mexican residents into RECA, but also to make sure that RECA will be extended and therefore justice will be delivered for all who suffered the consequences of the Trinity Test.

To listen to Part I of this episode with Tina Cordova, follow this link.

Livia is a downwinder of the first atomic bomb tested at the Trinity Test Site. She is part of the steering committee of the Tularosa Basin Downwinders Consortium. Livia was  not raised in Tularosa, but her family is from there.  Livia was around six or seven years old when  her aunt Tina Cordova started her work with co-founding the TBDC . Livia is of a younger generation in the family who, as well as Tina, got to know about negative consequences of the test  from the experiences of her loved ones. Since joining TBDC, Livia’s involvement was minimal, however as she grew up, her role became more important and more vital. The main work she has been focusing on was to collect health surveys which  led to a comprehensive  database of the situation with health complications of Tularosa residents due to nuclear testing.

The Concerns of Younger Generation

Being a psychology student, Livia pays attention not only to the impact on physical health, but also to the mental health of people from Tularosa. Mental health is a topic that is mostly being ignored and not talked about among the community. For the health surveys Livia collected, she can highlight the feeling of fear from these individuals, especially people who have survived cancer, the fear of getting it again, not only due to the main reason of suffering, but also because of financial reasons that follow this.

The same fear is also shared by younger generations, especially those who, like Livia, have seen their family members suffer. Their fear expands not only because of their parents and relatives, but also that it might continue. In Livia’s opinion, the existence of nuclear weapons is a constant threat, and in order to not have the threat anymore, the total change in world leaders to a newer generation might provide a different perspective to these issues, since the younger generation has witnessed traumas that are a result of the generations before us. This includes nuclear weapons, climate change and safety related issues. The different perspective that young people, a generation of incredible and bright activists, bring forth to this topic will hopefully allow us to do things that will be in the best interest of humankind.

Livia highlights that the decision makers who chose to conduct the Trinity Test not only made unethical and inhumane decisions for other people, they have determined the path of their own lives that has endangered the lives of many individuals. Knowing the long-term consequences of the nuclear tests, the biggest issue after what happened is a lack of any damage control, acknowledgement of the wrongdoings and refusal to provide any assistance to a lot of people who are still surviving  the negative consequences up until this day.

Livia’s hope, as well as a goal she wants to achieve, is to ensure that people who have been suffering  will be compensated in a way that feels fair to them, and can support them in trying to live a more comfortable life. Livia will continue to fight every single day, because unfortunately for a lot of people, it means survival.

To listen to Part II of this episode with Livia Cordova, follow this link.