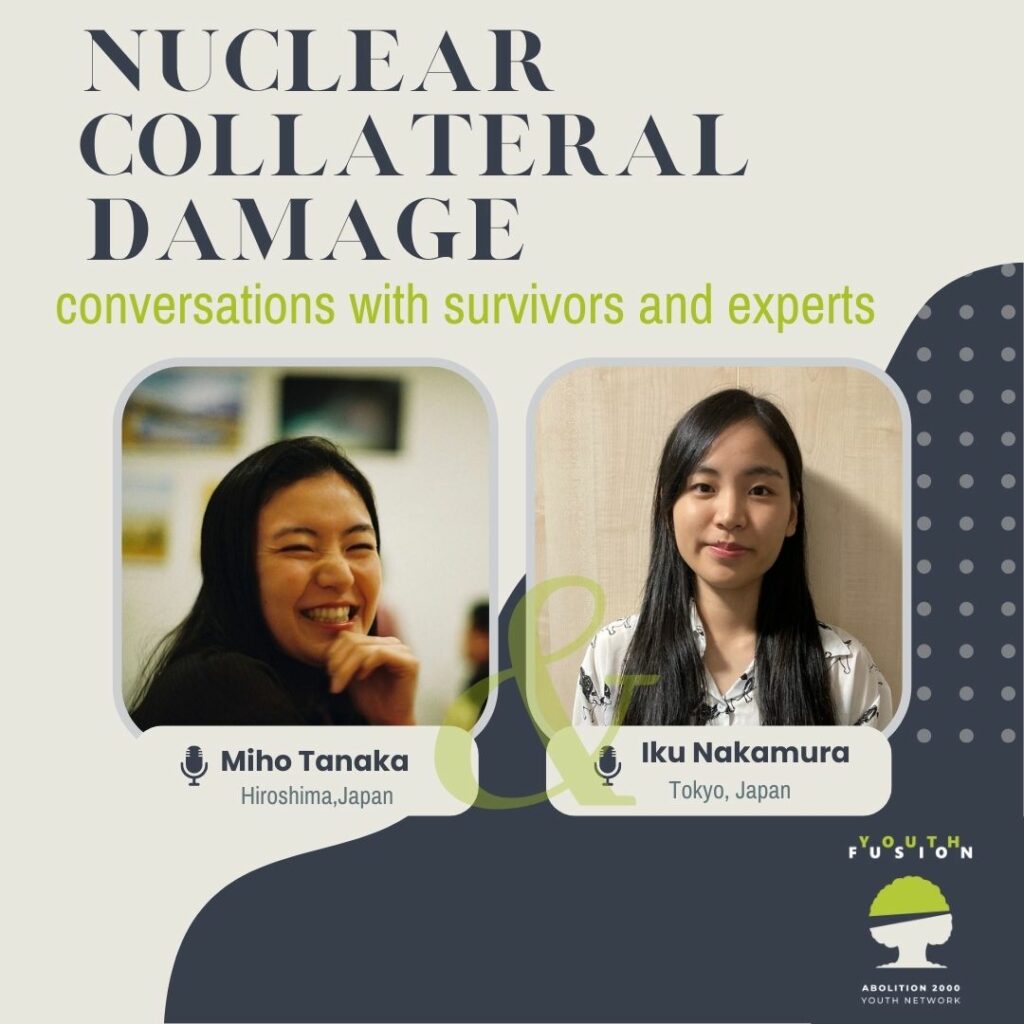 In the second episode of the podcast series, Nuclear Collateral Damage: Conversations with Survivors and Experts,  Youth Fusion spoke with Miho Tanaka and Iku Nakamura, youth activists from Japan. In this episode, Miho and Iku share their experiences of activism and organizational work to raise awareness around nuclear disarmament, including projects related to engagement with Diet Members of the Japanese Parliament with the aim to sign and ratify the Treaty on the Prohibition of Nuclear Weapons (TPNW).

About Miho Tanaka and Iku Nakamura:

Miho Tanaka moved to Hiroshima for work after graduating from college in 2017. In January 2019, she launched Kakuwaka Hiroshima, a lobbying group that meets with representatives elected in Hiroshima to ask for their thoughts on their government’s stance on nuclear issues, including the nuclear ban treaty. While continuing to work as an engineer, she works with the Kakuwaka team to raise public awareness through sharing their work on social media, writing articles, and appearing in the media. She is also involved in translating campaign news and newsletters issued by International Campaign to Abolish Nuclear Weapons (ICAN). Through her involvement with ICAN, Miho was inspired to work in the nuclear disarmament field. Another key source of  inspiration for her is Setsuko Thurlow, Hibakusha, a survivor of Hiroshima. The name of her organization derives from “Kakuwaka” meaning “I want to understand” (coming from ‘waka’ in Japanese) “nuclear weapons” (coming from ‘kaku’ in Japanese).

Iku Nakamura is a Representative of KNOW NUKES TOKYO. Iku was born in Tokyo and is currently a student at King’s College London. Iku participated in an exchange program in the US, where she launched the “One History Textbook Project” with local students to create a history textbook that considers World War II from both Japanese and American perspectives. She is currently working with KNOW NUKES TOKYO to expand their activities internationally.

KNOW NUKES TOKYO was founded by two Japanese university students who are from Hiroshima and Nagasaki, and they are currently studying in universities in Tokyo. There are three main goals identified in the organisation’s mission.  First, “NO NUKES” which  stands for their policy that completely condemns the use and existence of nuclear weapons. Second, “KNOW NUKES” aims to raise awareness and educate people about issues surrounding nuclear weapons and disarmament. Lastly, “KNOW NEW” wanted to make peace activism a viable career for those who wish to pursue jobs in the fields of peacebuilding.

Japan vs the TPNW:

Japan is not a signatory to the TPNW which is connected to Japan’s alliance with the United States and being  under the  US nuclear umbrella. Japan has signed other disarmament treaties — the Nuclear Non-Proliferation Treaty (NPT) in 1970 and the Comprehensive Nuclear Test Ban Treaty (CTBT) in 1996.

Given Japan’s long history with the US when it comes to the TPNW, Japanese politicians are reluctant to join the treaty since they want to avoid provoking the US who is the guarantor of Japanese security via the nuclear umbrella. Moreover, Japan is faced with several threats to its national security such as North Korea and China. This makes Japanese politicians more hesitant and sensitive towards TPNW. This reluctance is reinforced by the lack of political will caused by a lack of awareness and public interest in Japan.

Public opinion related to the TPNW varies and despite one of the publicly available official surveys showing the general support of 75% of the Japanese people, there is evident lack of interest and awareness in nuclear weapons issues since mostly people from Hiroshima and Nagasaki advocate for the ban treaty. For that reason, the work of Kakuwaka Hiroshima and KNOW NUKES TOKYO is vital since the main objectives of both organisations are centered in raising awareness about the need to join TPNW and engaging with Members of National Diet of Japan (Diet or Japanese Kokkai is a Parliament of Japan).

Since they began their work in 2019, the Kakuwaka Hiroshima team has met with 11 Diet members elected in Hiroshima or elected elsewhere but born and raised in Hiroshima. All of these members say that they are committed to nuclear abolition, however some of them do not support the ban treaty since the division around the TPNW generally follows party lines where Left-wing and progressive parties are in favor of signing and joining the first meeting of states parties as an observer, while conservative parties such as the Liberal Democratic Party (the government party), argue that the treaty is ineffective and will deepen the division between nuclear and non-nuclear states. Currently, there are seven members who have not yet responded to the visit including Prime Minister Kishida who became prime minister last October, but he has denied them a visit for about three years since the Kakuwaka team started, due to lack of time and other reasons.

KNOW NUKES TOKYO has done projects in a similar direction, for example  a project named “Giin Menkai Project”, where  organisation members  engage in direct dialogue with Diet members about the TPNW. According to the research done by “Giin Watch”, a group searching each Japanese politician’s point of view towards the TPNW, revealed that only 34% of Diet members agree with the treaty and most of the other 60% of them did not answer, which means they do not have a clear stance. Giin Menkai Project aims to activate the discussion by asking Diet Members’ opinions directly and figuring out their individual opinion, not an answer deriving from their party affiliations.  In addition to lack of awareness and interest among legislators, another big issue KNOW NUKES TOKYO  has been facing is the Diet members’ attitude towards them – meaning, an ageism issue. There are Diet Members who are willing to engage in a dialogue with the organisation, but because KNOW NUKES TOKYO consists of university students, some Diet members have a somewhat “teach you what to do” attitude and do not treat them as equals, and they are not always able to get to the stage of dialogue.

Despite these challenges, they have requested visits to more than 40 politicians, mainly elected from Tokyo, and have interviewed 6 Diet members. One of the great results of the work of the organisation is that one of the Diet Members they interviewed had not had any policy for the nuclear weapon issue, but at the election after the interview, he added “joining the MSP, meetings of states party to the TPNW” as one of his election pledges.

Miho and Iku, as part of their organisations and individually, have been advocating for the country that went through the horror of the use of nuclear weapons to join the TPNW and therefore give examples for nuclear weapons and allied states to follow. These young activists operate on the local, regional and international levels to remind the world of the inhumane threat of nuclear weapons use which leads to horrifying outcomes.

By shedding light on the experiences of Hibakusha and being inspired by their stories, they aim to achieve a paradigm shift within today’s  perspectives towards nuclear weapons by spreading the idea of their inescapable inhumanity.

Visit this link to listen to a more detailed version of the conversation.

Stay tuned for our next episode 🙂