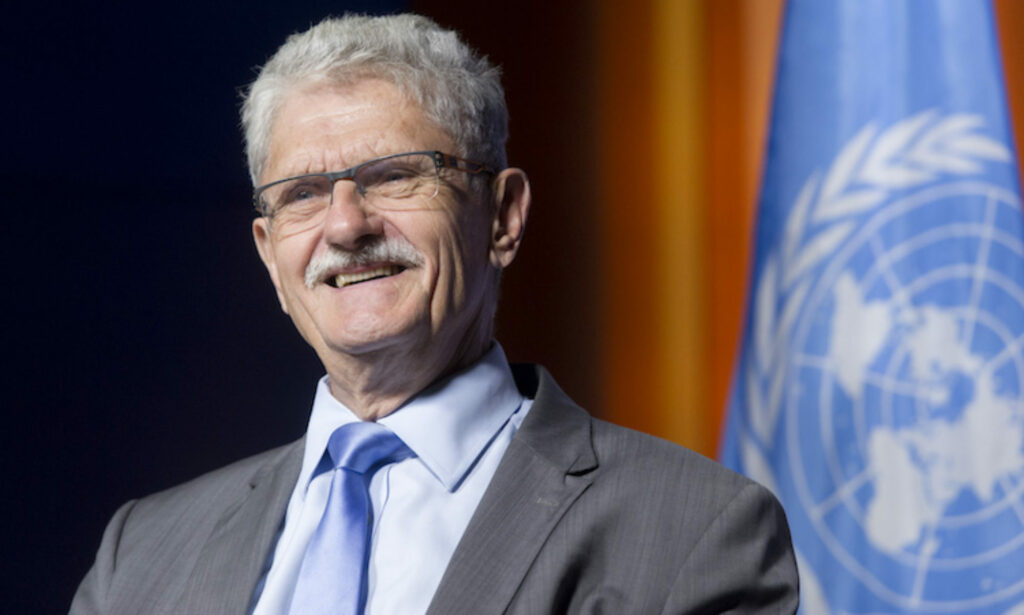 This article covers the interview with Mogens Lykketoft by Youth Fusion Members Michaela Sørensen and Arthur Duforest. The interview was carried out in the context of the Youth Fusion Elders project which highlights the importance of intergenerational dialogue, and of youth learning from the experience of those who have been long-time and effective leaders in the peace and disarmament fields.

This interview’s Youth Elder is Mogens Lykketoft, former president of the 70th United Nations General Assembly, and a leading figure of the Danish Social Democratic party. Our conversation related to his life-long involvement with political and global matters as well as his time within the UN, topics of global cooperation, the importance of intergenerational dialogue, the Sustainable Development Goals framework, nuclear disarmament, and youth participation in civil society.

On the Importance of the United Nations & the Sustainable Development Goals

The first question touched on the origins of Mr. Lykketoft’s interest and engagement with global issues, to which he answered by pointing out his interest in history and conflicts, which were born from his perceptive experience of the 1950’s Suez crisis. His early engagement with the local Danish United Nations Youth Association, as well as his later engagement with the youth group of the Social Democrats, led him to interact with global and political issues early on, thus inspiring him to bring about change, participating actively and building a complex understanding of the world. His time with the United Nations Youth Association of Denmark brought him to put his political interests in perspective, on a global scale, resulting in a better understanding of multilateral issues and how to reach better solutions, locally and globally.

In reference to various conflicts Mr. Lykketoft followed while growing up, he mentioned having gone to a lot of demonstrations “it taught me that it was not a black white world. I was always very interested in trying to understand international development and how to possibly work for a better international cooperation”.

A point was made about the public’s aversion to the work of the UN, where it would appear that many are critical of the work done by the member states and the flaws of the Security Council. Mr Lykketoft emphasized that while the UN’s work might look remote and far away to some, it is the most complex and complete institution that we have, with the highest chance of establishing the key component of problem solving: dialogue. In reference to this point, Mr. Lykketoft stated that, “with the United Nations, I think you miss a very important point. Never before in human history have we had an organisation where practically every government in this world is assembled and obliged, at least, to speak with each other.”

Acknowledging the tremendous impact of the UN, and all its sub-organizations, is key to combat false skepticism and fake news. A hopeful view of the world is often what is needed to rekindle one’s faith in international institutions. Mr. Lykketoft looked at some of the UN’s achievements, regarding poverty since the 2000’s, the increase in life expectancy, spread of agricultural practices and reduction of malnourishment, and stressed that is is ultimately in the interest of the “major powers” to have their neighbors well fed and on a path to progress and stability. This understanding has been achieved in the past and cooperation has yielded positive results not only for developing countries, but also for big powers. In stressing the potential of cooperation, Mr. Lykketoft looks at the future of the UN with hope and underlines the importance of having countries like the US, China or Russia back on the forefront of international cooperation, stating that “these existential issues, before the whole humanity, just can’t be dealt with without strong international cooperation”.

When asked about the impact of the entry into effect of the Sustainable Development Goals during his tenure as president of the UN General Assembly, he placed emphasis on the continuous fight to eradicate poverty and the importance of climate change as a political catalyst to instability. Mr. Lykketoft stated that current infinite growth models are unsustainable, namely where the overconsumption of the few disproportionately impacts the many, leading to human crises and mass migration. Therefore, Mr. Lykketoft explained that “we had to combine the fight against poverty with the fight for sustainable climate and environmental development, and we had to realise that it meant that the model of growth we had followed, and that billions of people in the developing world were trying to follow after us, was not as sustainable”.

When the topic of public involvement with the SDGs and the impact the public had and has on their implementation came up, Mr. Lykketoft referred back to the initial process of drafting the goals, stating that “the United Nations never before adopted so radical an agenda, and one of the main reasons for that was of course the urgency of action, but also that civil society all around the world had a lot of influence on the process – it was not only the 193 governments, there was a strong influence from the civil society in formulating this document of the total interdependency of everything”.

This quote stood out as one that recognizes the strength of democratic participation, and the need for involvement of the citizens at every level of the political decision making process. It goes without saying that the UN SDGs framework would not be where it is today without the participation of civil society, and this road ahead will not be achieved without civil society’s involvement in its future applications.

Mr. Lykketoft cited the New START Treaty as an important effort, between the US and Russia, in collaborating towards nuclear disarmament. Mr. Lykketoft stated that “of course, we could all wish for the total abolition of nuclear arms. That will not happen soon, I’m afraid, but to make states abstain from developing new strategies of using so called small nuclear arms, and so and so forth, are all positive steps that could help show less tension and less risks of military conflict, locally or internationally”. Therefore, Mr. Lykketoft highlighted that nuclear disarmament is a long term, strategic effort that requires multilateral cooperation.

Mr. Lykketoft is a strong advocate of youth empowerment in the political and the international relations fields. Starting off his interests and career at a young age himself, he is a prime example of the power and potential the youth have. On the importance of intergenerational dialogue, Mr. Lykketoft stated that, “intergenerational discussion is always very important, as I’ve said in hundreds of meetings around the Sustainable Development Goals, we have a young generation that can educate their parents and grandparents at the dining table about what’s the reality is here, because the awareness of these problems, are for obvious reasons, much more present at the young generation. They know it’s about them, they know it’s about their future, and it’s extremely important that young people go out and participate in civil society and participate in elections”.

The full conversation between Mr Lykketoft, Michaela and Arthur is available on the Youth Fusion Podcast page, to listen through a platform of your choice. Make sure to share and follow Youth Fusion on social media for more content like this and to be informed whenever inspiring conversations are released.