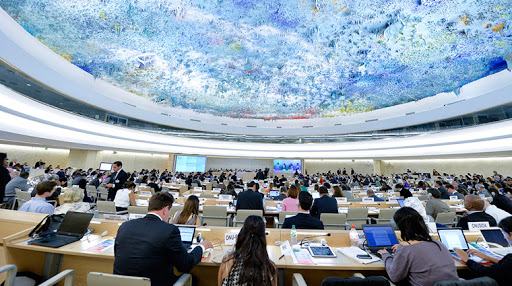 Youth Fusion joined with Basel Peace Office and other peace and disarmament organisations in submissions made on January 4 to the United Nation Human Rights Committee (UNHRC) challenging the nuclear weapons policies of North Korea and Iceland as being in violation of the Right to Life, a core human right codified in the International Covenant on Civil and Political Rights (ICCPR).

The submissions are part of an initiative of the organisations to challenge the policies and practices of all nuclear armed and allied states in UN Human Rights Bodies following the affirmation by the UNHRC in October 2018 that the threat or use of nuclear weapons ‘is incompatible with respect for the right to life and may amount to a crime under international law’, and that States parties to the ICCPR must ‘refrain from developing, producing, testing, acquiring, stockpiling, selling, transferring and using them [nuclear weapons and other weapons of mass destruction],’ and to ‘pursue in good faith negotiations in order to achieve the aim of nuclear disarmament under strict and effective international control and to afford adequate reparation to victims whose right to life has been or is being adversely affected by the testing or use of weapons of mass destruction.’

The UNHRC conducts a periodic review of States Parties’ implementation of their obligations under the ICCPR, and provides an opportunity for civil society organisations to submit relevant information regarding the States Parties whose turn it is for review.

In March, the UNHRC will be considering issues relating to the Democratic People’s Republic of Korea, Fiji, Grenada, Iceland, Malawi, Nepal, Sao Tome and Principe, Seychelles and United Republic of Tanzania. Of these, North Korea possesses nuclear weapons and Iceland has a security policy relying on the threat or use of nuclear weapons through its membership of NATO and security agreements with the United States.

‘Until 2018, there was no much interaction between the Human Rights community and the nuclear disarmament community. But the affirmation made by UNHRC in October 2018 changed this situation,’ reports Christoph Jaschek, Research Assistant at the World Future Council and Youth Fusion. ‘Since that time, there exists the opportunity to link both areas and to show, that countries like DPRK or Iceland violate fundamental Human Rights with its security policies that rely heavily on nuclear deterrence. While both submissions were made for the same session, their content differs to a wide extend: North Korea was and is very active in developing, testing and threatening with the use of nuclear weapons. On the other side, Iceland itself does not possess a military. Therefore, it relies heavily on the security established by NATO presence and US, British and French nuclear weapons. In the end, both practices mean a severe violation of basic Human Rights.’

The submission on North Korea was made in conjunction with Aotearoa Lawyers for Peace, Schweizer Anwälte für Nukleare Abrüstung (Association of Swiss Lawyers for Nuclear Disarmament), World Future Council and Basel Peace Office. It asserts that North Korea (officially known as the Democratic Peoples’ Republic of Korea) is in violation of the Right to Life by developing, producing, testing, possessing, deploying and threatening to use nuclear weapons.

“The DPRK government has made numerous statements affirming that it possesses nuclear weapons and missiles that can deliver such weapons, that these weapons are part of a policy of nuclear deterrence which includes the option of using the weapons in response to a nuclear attack, and has backed up these statements with nuclear weapons detonations (tests) and ballistic missile flight tests to demonstrate its capacity to undertake nuclear attacks.”
This argument can be found in DPRK’s Nuclear Weapons Policy and Practice with respect to the Right to Life, Submission to the UN Human Rights Committee by Aotearoa Lawyers for Peace, Basel Peace Office, Association of Swiss Lawyers for Nuclear Disarmament, World Future Council and Youth Fusion.

The submission also notes that DPRK is less able to protect life from the impact of malnutrition and poverty while it is diverting considerable human and economic resources to the production and testing of nuclear weapons.

“DPRK ranks amongst the 20 poorest countries in the world. Diversion by the government of substantial human and financial resources to support the development of nuclear weapons and their delivery vehicles is likely to be having significant impact on the government’s capacity to address poverty and other social and economic need. Ending the diversion of resources to nuclear arms would greatly promote the protection of life in accordance with Article 6 of the ICCPR.”

With regard to DPRK’s policy regarding ‘good faith negotiations in order to achieve the aim of nuclear disarmament’ the submission welcomes DPRK’s support for negotiations on a nuclear weapons convention, and also welcomes the DPRK’s commitment to the total denuclearization of the Korean Peninsula as affirmed in the 2018 Panmunjom Declaration and in the 2018 Singapore Summit joint statement. However, concerns are expressed in the submission about the lack of implementation of these commitments.

Finally, the submission makes a number of recommendations to DPRK including to:

The submission on Iceland was made in conjunction with Aotearoa Lawyers for Peace, World Future Council and Basel Peace Office. It asserts that Iceland is in violation of the Right to Life through:

The submission welcomes a number of positive moves that Iceland has made with respect to the obligation to support comprehensive nuclear disarmament. These include hosting the historic Reykjavík Summit between U.S. president Ronald Reagan and General Secretary of the Communist Party of the Soviet Union Mikhail Gorbachev in October 1986, and the declaration by the Iceland Parliament in 2016 that Iceland and its Exclusive Economic Zone are a nuclear-weapon-free zone.

“That Iceland and its economic zone be declared a nuclear-free zone, taking account of international obligations, with a view to contributing to disarmament and peace.“
Parliamentary resolution on a national security policy for Iceland, Adopted by the Althingi (Iceland Parliament), 13 April 2016

Finally the submission makes a number recommendations to Iceland, including to:

USA, Russia and others

Submissions with regard to other nuclear armed and allied states are being planned as they come up for review by the UN Human Rights Committee. For more information, contact Alyn Ware, Director of the Basel Peace Office and International Representative for Aotearoa Lawyers for Peace.