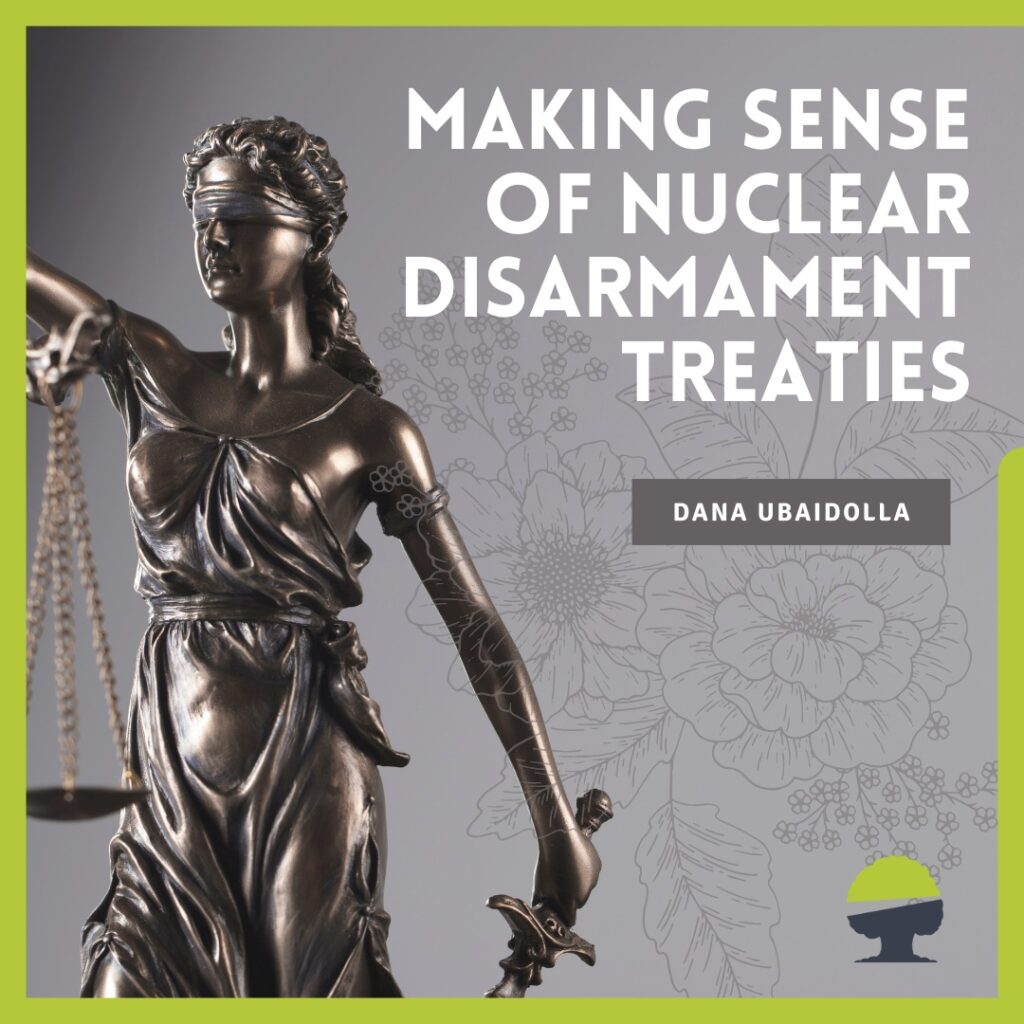 Disarmament and the non-proliferation of nuclear weapons started to come to the forefront of people’s minds at the end of the 1940s, namely after the nuclear bombing of Hiroshima and Nagasaki in 1945, as well as the advancement of nuclear armory by the nuclear weapons states. Before the 1960’s, implementing such rules was near impossible due to the coalitions of great powers and the tense political climate that spurred on the Cold War. However, there were multiple actors that put forth a disarmament agenda, and the concept of nuclear non-proliferation was discussed in negotiations inside the United Nations’ framework as early as 1957, and acquired major momentum in the early 1960s.

The centerpiece of the nuclear non-proliferation and disarmament agenda, relating to nuclear weapons, is the 1968 Nuclear Non-Proliferation Treaty (NPT), which entered into force in 1970, and has since gained near-universal adherence.

The NPT includes 12 articles and is famously referred to as having three pillars: the peaceful use of nuclear energy, non-proliferation, and disarmament.The United States, the Soviet Union/Russia, the United Kingdom, France, and China, referred to as the P5, are legitimately considered ‘nuclear-weapon states’. Within the NPT, such terminology and categorization impacts their obligations, with the P5 exercising the most control.  Other nuclear-armed states, such as India, Pakistan, North Korea, and Israel, currently have not ratified NPT.

In Article I and Article II, the commitment was made not to transmit nuclear weapons or related technologies to other non-nuclear weapon states (NNWS). For their part, nuclear-weapon-free governments committed to refraining from acquiring nuclear weapons.

In addition, according to Article IV, all states were also allowed to utilize nuclear energy for peaceful purposes and other nations’ technical assistance in advancing this emerging technology under the terms of the Treaty. The Treaty guarantees all parties the ‘inalienable right’ to peaceful uses of nuclear technology and, Article VI also requires the nuclear weapons states (NWS) to pursue negotiations in good faith toward the reduction and eventual elimination of nuclear arsenals.

The Treaty has been termed a ‘grand bargain’ in which the non-nuclear weapon states (NNWS) forsake the nuclear option in exchange for a legal obligation on the part of the NWS to refrain from transferring the weapons to any other states and to disarm and eventually eliminate their arsenals.

Since the Treaty on the Non-Proliferation of Nuclear Weapons (NPT) came into force more than 50 years ago, cooperation on the peaceful uses of nuclear energy, science, and technology, so-called ‘peaceful uses’, has grown tremendously. Increasingly, parties to the NPT are successfully making the benefits of peaceful uses accessible to all, safely and securely. Today, thanks to the confidence and safeguards provided by the NPT, nuclear applications are greatly improving the lives of people all around the world.

However, by and large, we have nine new weapon states today, which is better than what it looked like could possibly happen in the fifties, before the NPT came into force. Without the NPT, there could be more nuclear armed states today, as well as more nuclear weapons with less regulation.

However, within the disarmament pillar, even the nuclear weapon states themselves would probably agree that it has been flagging a little bit, although they would disagree with why that has happened. There has been shockingly little done on the implementation of the NPT, in regard to its obligations, as it concerns disarmament. There have been 64 Action items for accelerating the 3 pillars of NPT that were made at review conferences, and were accepted by all states in the 2010 Conference. Nowadays, the status of these action plans is uncertain, because the nuclear weapon states are moving goalposts endlessly and are doubting the status of the 64 Action plans, and whether they are obligatory or recommendatory by character.

Moreover, the most recent NPT Review Conference in August 2022 further exposed the weaknesses of the NPT with Russia, a member of the UN Security Council, vetoing the final draft. Russia accused other delegates of ‘politicising’ the treaty as a clause condemning the Russian activity around the Zaporizhzhia nuclear power plant was included. Therefore, there was no outcome, and no progress, leaving many to criticize the treaty for not fulfilling its disarmament purposes.

Although many NPT Review Conferences have been accused of failing in recent times, it is important to highlight some of the positive outcomes, such as the ‘failed’ NPT Review conference in 2015 that paved the way for both the negotiations on the TPNW and the commencement of the UN Conference on Establishing a Middle East Zone free from Nuclear Weapons and other WMD.  See UNFoldZero’s article on this, and  Opportunities to advance nuclear risk reduction, including no-first-use, in the wake of the ‘failed’ NPT Review Conference to find out more.

The Treaty on the Prohibition of Nuclear Weapons

These facts underline why the Treaty on the Prohibition of Nuclear Weapons (TPNW) is so important. The Treaty on the Prohibition of Nuclear Weapons (TPNW), negotiated by more than 130 states, is a good faith effort to meet their responsibilities as signatories of the NPT to pursue effective measures on disarmament. The TPNW further reinforces the commitments of these states against the use, threat of use, development, production, manufacture, acquisition, possession, stockpiling, transfer, stationing, or installation of nuclear weapons. It reinforces states’ commitments to the NPT and the Comprehensive Test Ban Treaty (CTBT). Although it is still unclear whether the prohibition treaty will eliminate any nuclear weapons as no nuclear weapons states are part of it, the treaty  is effective in helping to further delegitimize nuclear weapons and strengthen the legal and political norms against their use.

Are the NPT and TPNW consistent?

The two accords’ fundamental duties appear to be completely compatible, despite not being identical. Due to this, previous legal studies of the TPNW have tended to focus on potential conflicts with current security arrangements rather than raising issues with the Treaty’s relationship to the NPT.

In fact, the TPNW might be considered as implementing NPT Article VI, because the TPNW is legally requiring States Parties to sign and maintain safeguards agreements with the International Atomic Energy Agency to ensure that peaceful nuclear material is not redirected for weapons development.

In light of this, it is quite concerning that some states are criticizing the NPT for political reasons, particularly because the nuclear-weapon states have not complied with their duties to disarm.

The TPNW has undoubtedly rekindled the conversation on the need for nuclear disarmament and will undoubtedly contribute to the stigmatization of nuclear weapons.

In summary, the NPT is an important achievement in the pillar of non-proliferation and peaceful uses of nuclear energy. However, its progress in regard to nuclear disarmament has been limited, inspiring the power of the nuclear-weapon states and infuriating others. The TPNW was drafted to create an effective means of legally mandating states to dismantle their nuclear weapons. Arguing legal inconsistency between the TPNW and the NPT would be difficult as the TPNW  is obviously  based on the  Article VI of the NPT. The debate over the TPNW is fundamentally grounded on political arguments about how the nuclear disarmament pillar can be pursued. The NPT  prioritizes non-proliferation over other pillars, while the TPNW highlights that progress on how disarmament has been belated. Paralelly, the TPNW, namely its signatory states, promotes disarmament by outlawing the continued possession of nuclear weapons by all states; therefore the TPNW differs from  the current nuclear regime. However, this does not make TPNW inconsistent with NPT.