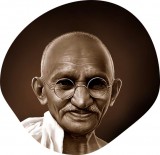 Gandhi’s legacy for nuclear abolition and the end of war

Commemoration of the 73rd anniversary of the martyrdom of Mahatma Gandhi

“The moral to be legitimately drawn from the supreme tragedy of the bomb is that it will not be destroyed by counter-bombs even as violence cannot be by counter-violence. Mankind has to get out of violence only through nonviolence.”
Atom Bomb and Ahimsa,
Cited in The Mind of Mahatma Gandhi

In 1945, on learning about the nuclear bombing of Hiroshima and Nagasaki, Mohandas (Mahatma) Gandhi said that “Unless now the world adopts nonviolence, it will spell certain suicide for mankind”.

Last week the Bulletin of Atomic Scientists re-affirmed this point by re-setting the Doomsday Clock at 100 Seconds to Midnight, indicating the continuing threat to humanity from nuclear weapons, in conjunction with the new existential risk of climate change and the disturbing trends in politics away from truth and science, and fostering division and hate.

In commemoration of the 73rd anniversary of the death of Mahatma Gandhi, the Gandhi Development Trust and the Phoenix Settlement Trust organised a memorial service which featured reflections from Ela Gandhi and other representatives of the two Trusts, presentations from winners of youth essay competitions on Gandhi’s principle of The Power of Love to Transform, and keynote addresses by Alyn Ware, Director of the Basel Peace Office and Vanda Proskova, Co-convenor of Youth Fusion and Vice-Chair of PragueVision Institute for Sustainable Development. 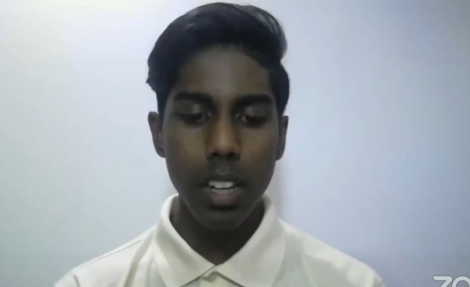 Mr Ware focused on key quotes and principles of non-violence advanced by Mahatma Gandhi relating to nuclear abolition and the end of war. Ms Proskova focused on the role of youth, and on ways to move the immense budgets and investments in the nuclear arms race to instead support the climate and sustainable development, and to build back better from the COVID-19 pandemic.

On the abolition of war, Gandhi said that “Peace will not come out of a clash of arms but out of justice lived and done by unarmed nations in the face of odds.” This ideal, along with the principles and many of the methods of nonviolence, are part of the UN Charter which prohibits the threat or use of force in international relations and provides a range of mechanisms for resolving conflicts peacefully, including through the International Court of Justice. In addition, some countries, like Costa Rica, have adopted constitutions embracing the principles of non-violence and abolishing the armed forces as a permanent institution.

Mr Ware called on all UN member states to implement their UN commitments and better use the methods for peaceful resolution of conflicts in order to end war globally. 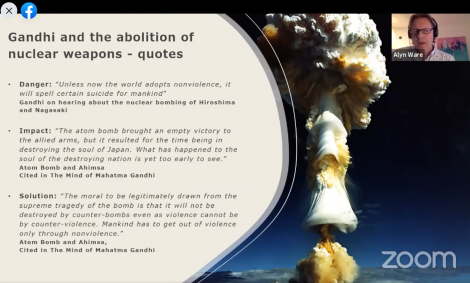 On nuclear abolition, Mr Ware noted a range of developments and initiatives taking forward the goal to achieve a nuclear-weapon-free world. These include the new Treaty on the Prohibition of Nuclear Weapons, an initiative of non-nuclear countries which could have a real impact on the nuclear arms race if states parties to the treaty adopted strong national implementation measures such as prohibiting transit of nuclear weapons and ending investments in the nuclear weapons industry. (See The Nuclear Ban is Here. Now What?)

Mr Ware also highlighted a number of initiatives to engage nuclear armed states in the process of nuclear disarmament including the establishment of nuclear-weapon-free zones (which restrict deployment of nuclear weapons), the Global Zero plan, the proposed Nuclear Weapons Convention, no-first-use campaigns, the Non-Proliferation Treaty Review Conference, human rights and nuclear weapons project, parliamentary initiatives and the Stockholm Initiative. He noted that the Gandhian approach is not to demonise or stigmatise our adversaries, i.e. those who still rely on nuclear weapons, but to engage with them in order to be able to address concerns of both sides (us and them) in forging win-win solutions.

Mr Ware encouraged the audience to support by endorsing the Protect People and the Planet Appeal for a Nuclear-Weapon-Free World.

Ms Proskova highlighted the human security and environmental needs that could be addressed if  part or all of the $100 billion annual nuclear weapons budget was redirected. These include medical needs for the COVID-19 pandemic, faster conversion to a fossil-fuel free economy, provision of education for all children in the world, ensuring basic healthcare for everyone, supporting the peace and development efforts of the United Nations which is woefully under-funded, implementing economic development plans that protect bio-diversity and more.

Civil society in nuclear armed states can support legislative efforts, like the SANE Act in the USA and Defence Diversification/Economic Conversion in the UK, to cut nuclear weapons budgets and re-direct these to human, environmental and economic need.

Civil society in both nuclear and non-nuclear states can engage in efforts to stop investments in the nuclear weapons industry, whether these are personal investments, or those by ones’ church, university, city, pension fund or other investment body.

The Move the Nuclear Weapons Money campaign highlights the nuclear weapons corporations to stop investing in, plus examples of divestment action and social media promotion. 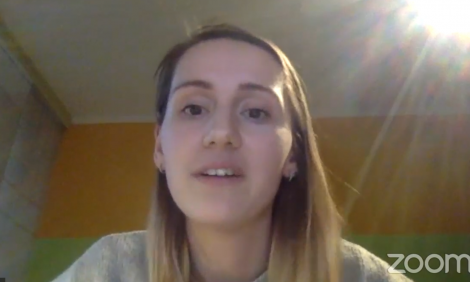 Ms Proskova also focused on the important role of youth to carry forward the aspirations and campaigns for peace, disarmament and a sustainable world. She noted the importance of youth learning from the experience, examples and wisdom of visionary and effective leaders like Mahatma Gandhi and Bertha von Suttner, the Prague born woman who was a leader of the European anti-war movement in the late 19th and early 20th Centuries and who was the first woman to receive the Nobel Peace Prize.

Ms Proskova highlighted that youth are making the connections and building cooperation between peace, climate, human rights, disarmament and sustainable development issues. A prime example of this is the Youth Fusion platform. 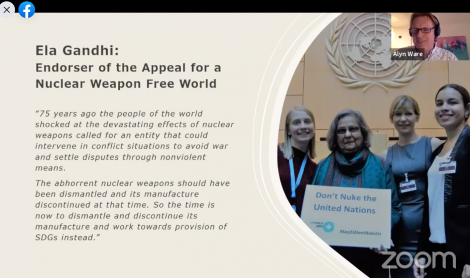