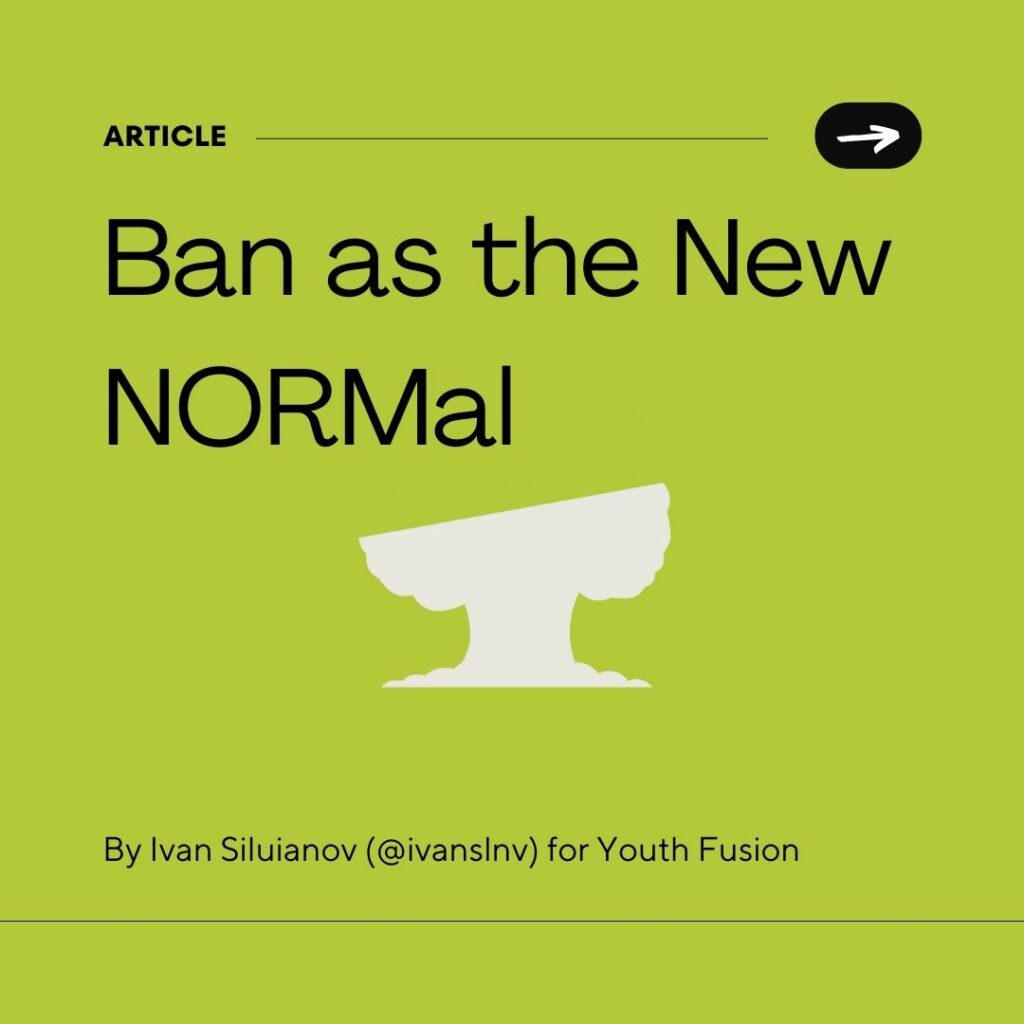 Ban as the New NORMal

The world we live in is driven by norms. As early as 1906, the Grand Duchy of Finland granted women suffrage rights, thus bringing about a radical norm change in Europe. In the aftermath of World War I, the women’s suffrage movement started to gain traction in the US, leading to the adoption of the 19th Amendment in 1920 that protected their rights and responsibilities of citizenship. The world saw a significant norm change following WWII with the establishment of the United Nations and enforcement of new humanitarian norms enshrined in the Geneva Conventions of 1949. Oftentimes, norms creation was spurred by atrocious conflicts and continuous efforts to remold the system.

Sometimes it takes thousands of innocent lives to learn the lesson. It was only after the Titanic tragedy that lawmakers realized the vitality of safety measures at sea and passed multiple acts such as the Radio Act of 1912 that regulated the use of long-wave frequencies and the SOLAS Convention of 1914 that required all ships have enough lifeboats for travelers on-board.

The idea that international norms develop in what is known as a “life cycle” was proposed by M. Finnemore and K. Sikkink in the 1998 article “International Norm Dynamics and Political Change”. The authors argued that, first of all, norms emerge with the persuasion of “norm entrepreneurs”, whose role is to frame a problem and convince the masses that there is a problem that needs to be solved. Drawing on the history of nuclear weapons and warfare, we see that it was not until years after the first nuclear bombs were dropped on Hiroshima and Nagasaki that the general public started to realize the impact of a nuclear strike. On the one hand, this can be put down to a deliberate campaign of “atomic whitewashing” that permeated pop-culture after WWII wherein nuclear motifs were in fashion, and Disney films massively contributed to the realization lag (read more about it in Dr. Becky Alexis-Martin’s new article “Our Friend the Atom”). On the other hand, lack of reporting on the bombing from a humanitarian perspective also played into the hands of the politicians who sought to emphasize the advantages of nuclear technology, especially with the Atom for Peace Program launched by President Eisenhower in 1953. Only after the hydrogen bomb test was conducted in the Marshall Islands one year later did an active “persuasion” stage begin with the Women Strike for Peace movement raising concerns over nuclear tests.

The second stage in the “life cycle” is called a “norm cascade”. It is characterized by a gradual proliferation of a norm among actors, for example, through pressure. With the rapid development of nuclear weapons by the UK, France, and China, the nuclear possessor states were prompted to put a halt to the seemingly inexorable proliferation of nuclear weapons and solidify their sole “nuclear status”. The NPT set the tone to the disarmament conversation thereafter, unequivocally affirming that states shall “pursue negotiations in good faith on effective measures relating to cessation of the nuclear arms race at an early date and to nuclear disarmament”.

The “cascade” is followed by “internalization”, the third stage in Finnemore’s cycle. What it means is that international norms are finally widely accepted, rarely challenged, or as Finnemore puts it: “[norms] acquire a taken-for-granted quality” [Finnemore, Sikkink, 1998, p. 892]. Under the NPT, nonproliferation, the right to nuclear energy, and disarmament became the new normal, shared by virtually all states, with a few dangerous exceptions.

History has proven that norms are not just born out of thin air. The TPNW came as a result of years of advocacy work and incremental steps taken by civil society, scientists, activists, and states. How do we influence the discourse to make the nuclear ban arguments more appealing to nuclear possessor states or, in Finnemore’s terms, how do we facilitate the norm cascades in the world where anti-nuclear rhetoric is often simply ridiculed?

First off, politicians and activists in the TPNW signatory states may utilize local sentiments against nuclear weapons to foster the creation of youth networks of disarmament activists, educating young people far and beyond their own borders. Finnemore referred to this practice as “socialization”. Indeed, people and states, often in a similar manner, tend to give in to peer pressure for fear of being ostracized. As of August 2022, 66 states have already ratified the TPNW making now ⅓ of all states party to the Treaty, and what’s more, the number of signatories is increasing. Given the nuclear weapon states’ (NWS)  ever-growing opposition to the Ban Treaty, it will be increasingly worthwhile to equip NWS youth with nuclear disarmament expertise and bolster general understanding of the hazards that nuclear weapons involve.

While the Vienna Declaration and Action Plan, adopted on June 23, 2022 at the First meeting of the parties to the TPNW spells out states’ commitment to universalization (i.e. enhanced outreach through diplomatic channels and appointment of government representatives charged with communicating the importance of the Treaty), youth networks and grassroots organizations with their robust communities play a pivotal role in the internalization of the norms set out in the TPNW. The 2021 Seoul Youth Declaration for Disarmament and Non-Proliferation is a remarkable example of the work done by young activists. One of the ideas expressed in the declaration is the establishment of a “youth quota” within delegations on all matters relating to disarmament and non-proliferation. The quota initiative will arguably delegate more power to the youth and turn them into full-fledged political actors on the par with ambassadors and formal delegations.

Let us not forget that the Ban Treaty campaign is not the only example of norm formation happening today – let’s learn from other spheres undergoing change. While a debate over the application of international law to cyberspace is becoming more contentious, we should keep our wits about the successes and failures of the talks in the UN Open-Ended Group on Developments in the Field of Information and Telecommunications – the linchpin of the international dialogue on cybersecurity. Following the cyber narrative will allow us to see what set of rules states finally agree to observe as a safeguard against adversarial efforts to sabotage critical infrastructure. How countries tackle the lack of an internationally recognized code of conduct in cyberspace (e.g. ambiguity concerning whether a cyberattack should be interpreted as an act of aggression) will be helpful in building an effective model of the world free from nuclear weapons with the NPT and TPNW at its foundation.

By looking into the life cycle of norms we have come to a frightening conclusion that sometimes it takes a disaster for new norms to take shape and see daylight. We have a moral obligation to prevent such a scenario from unfolding and at the same time ensure that the new norm is accepted across the board. While the world’s nuclear weapons are on high alert, there is no margin for error. The NPT and TPNW need us to push them further, just as much as we need them to survive.