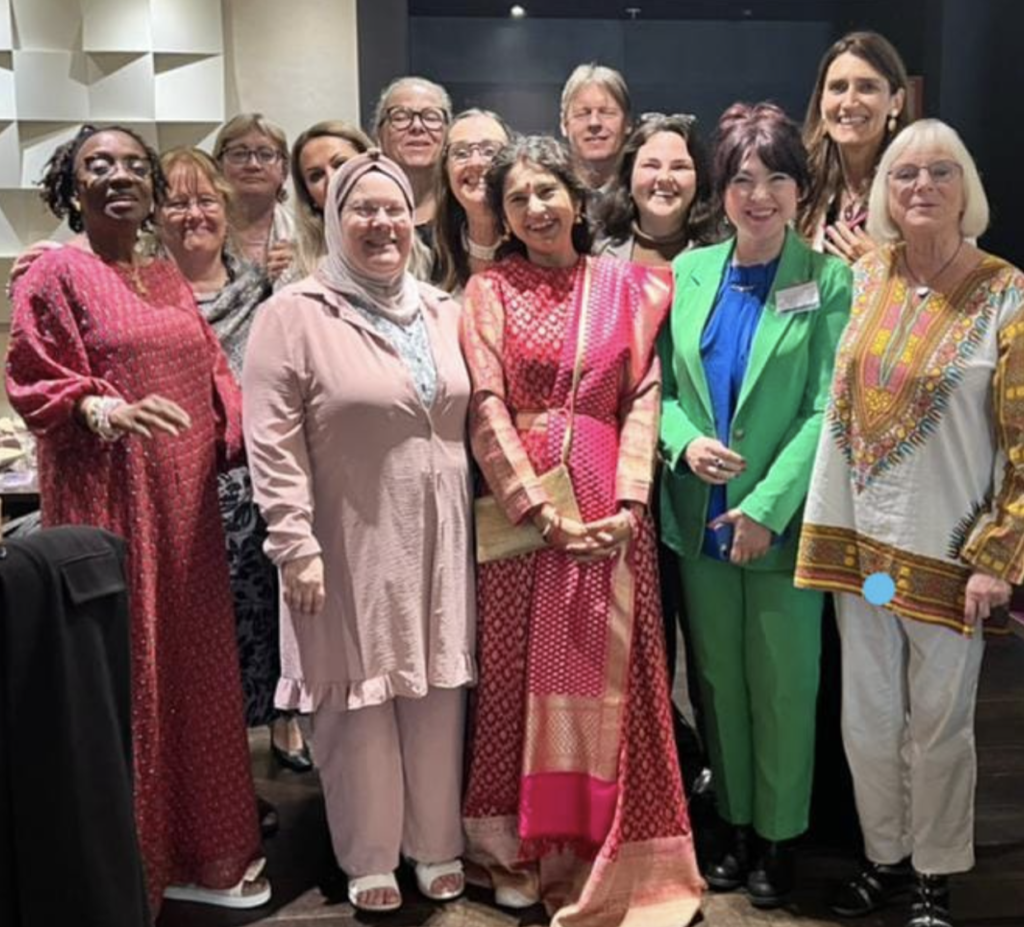 On June 1st, 2022, Michaela Higgins Sørensen, a Core Member of our Youth Fusion Team, spoke on a panel in the Swedish Parliament in Stockholm on the connections between climate, peace and human security as part of the G100 Women Leaders Seminarium. Michalea was a youth speaker who spoke alongside 5 other panelists, thus promoting Youth Fusion and one of our core values: intergenerational dialogue. Below, you can find her speech, as well as watch the whole session on the link provided here.

Hello everyone, and thank you for having me here today. I am so honoured to be sitting on a panel with such distinguished speakers, and in the great and inspiring company of you all. I am Michaela Higgins Sørensen, half South African, half Danish, but raised in Mozambique, and I have been working with PNND’s Gender, Peace, and Security Programme for the past two years, as well as being a core member of the Youth Fusion team. During this time, and over the course of my education, I have learned so much about the disarmament field. It is truly a unique space wherein I see so much potential.

As you all well know, there have been great strides for all of us within this space, but also great setbacks. The ongoing invasion of Ukraine by Russia is one major setback to mention, with Russia’s nuclear weapons being put on high alert. However, despite such a dire and dangerous situation we all find ourselves in, I still see glimmers of hope in all the work that people like us are tirelessly doing every day, whether it comes from the top-down or the bottom-up. It gives me hope that after every setback, we come back stronger and let everyone realise, namely for us here in Europe, to never take our peace for granted.

And that’s one point I would like to reiterate: taking peace for granted. For the most part, people, or rather youths from my generation in the western world, have lived in a world without major conflict for our entire lives. We take peace for granted every day; it is our norm. A conflict in Europe has been almost unimaginable for us. However, we have grown up with another major threat to our safety: Climate change, or ‘global warming’ as it was referred to when I was a kid. I remember being in the 6th grade learning about rising sea levels, crop failure, increasing temperatures, melting ice caps, starving polar bears, and going home very stressed about all of these terrifying impacts.

In Mozambique, there is little to no infrastructure for recycling, especially when I was younger, but I still urged my family to do something, even though my dad told me that Mozambique did not contribute to climate change that much, so I didn’t have to worry. I did not buy his excuse, by the way, even though, factually, he was correct- I still had a strong urgency to act and do ‘something’. 12-year-old Michaela did not know what that something was, apart from the ‘reduce, reuse, recycle’ mantra, but she was very serious about it because the ocean, the fish, the national parks and the animals she loved so much were all in great existential danger.

Thus, Climate Change is the threat to safety and peace that my generation has grown up with. We are all too well aware that we are inheriting an earth that has been utterly mistreated for decades, in the name of profit. Young people are hyper aware of such things, we’ve had the education and the internet at our disposal to see it all in real time. Climate change is my generations’ problem. However, in the past four months, the one peace we took for granted has been swiped from beneath our feet. The Russian invasion of Ukraine has been very close to home for many of us. Too close to home.

Suddenly, there is talk of nuclear weapons being used, military spending is at an all-time high, people are dying in our very own neighbourhood, and millions of Ukrainians have become refugees overnight. And it has happened all so very fast. What has transpired in the past four months is almost surreal to many of us youths because it has not existed in our bubble of a reality, and we never thought it would. Until now. The one peace we thought we could rely on, and have taken for granted, is now shaking at its very foundation.

That’s why making connections between the climate, peace and human security is of the utmost importance. We must never take peace for granted. Peace is the foundation of a well-functioning society, and without it, we will achieve nothing. We will never be able to face the challenges that climate change brings about if we do not have peace. This has been demonstrated in conflict ridden countries, such as Afghanistan, Yemen, Somalia, South Sudan, Myanmar, Ethiopia, and more. These countries have had a total societal breakdown in their conflict regions where people are living without human security. Their basic needs are not being met- they do not have the freedoms that are essential to life. They do not have food, healthcare, reliable water sources, a government they can trust, economic security, environmental security, personal or community security. Again, many things that we, in the west, take for granted.

That is why I specify that it is in the west that we have taken our peace for granted, because there have been many ongoing conflicts that have killed thousands of people in other regions that many of us have turned a blind eye to- as long as we have our peace. Peace is fragile. Security and safety are Fragile. If we do not look after them properly, they will wilt and die. That is why I hope, that if anything, we learn from this Russian invasion of Ukraine here in the west. I hope that we open our eyes to see that various issues, such as climate change, peace, and human security, are all interconnected on many different levels, and in all directions. We cannot look at any issue as a stand-alone matter that belongs solely to other countries. We cannot leave anyone behind in our approaches towards achieving peace.

Increased expenditure of militarism is one example. A recent 2021 SIRPI report estimated that the current global military expenditure sums up to a staggering 1,981 billion USD. I have a few points on this matter. Number one: weapons and military equipment are absolutely awful for our environment, and exacerbate climate change. I spoke to Lis Kayser in February, who is currently doing her PhD at The Danish Institute for International Studies, as part of their ongoing project called ‘RADIANT’, which stands for ‘Radioactive Ruins: Security in the Age of the Anthropocene’, for the Youth Fusion podcast.

Lis told me about how the nuclear weapons testing and military activities carried out in French Polynesia, namely on the Hao Atoll, during the French military occupation from 1966 to 1996 has had negative repercussions on their environment, as well as the populations’ health. The French military dumped all their military waste into the main lagoon on the Hao Atoll, and have yet to remove the vast majority of it. This is tons of military waste we are speaking about here, that has been left to pollute the lagoon, ruin the environment, and threaten the human security of the Hao people. Because of the ruined environment, the tourism industry is non-existent because nobody wants to go to a polluted lagoon- which hinders the economy; the peoples’ health has been severely impacted with high rates of thyroid cancer; and their food security has also been threatened as there are hardly any fish in the lagoon.

All of this is a direct consequence of military spending. Furthermore, there has been little to no spending on the part of the French government to restore justice to the people of the Hao Atoll and repair their environment, or provide any support to the people who have suffered from the negative effects of the radioactive substances within their environment.

The second point I would like to raise is that we could be spending that money on helpful things. We could be investing all that money into healthcare, a green economy to help mitigate climate change as best we can, into ensuring everyone across the world is fed, ending world hunger with just a fraction of that staggering amount, thus investing in human security and positive peace. I have had multiple conversations where such ideas have been called extreme or crazy, but I outright disagree. What is extreme and crazy is that we spend so much money on violence.

Currently, we invest in weapons that are fundamentally designed to kill people, many of them in mass; we invest in fossil fuels that are slowly killing our environment, as well as negatively impacting peoples’ health; and we invest in expunging our oceans and nature to near extinction. We invest in the wrong things. We have created a structure of violence that has been so normalized, that people have stopped questioning it, unless it is on their doorstep. And when I say a structure of violence, I mean capitalism and patriarchy, that is violent towards the people and our planet, and is designed to only benefit a few.

So, we need to be intersectional in our work and take an ethics of care approach, based in human-rights, that promotes human security, for all. Our world is too interconnected to ignore conflicts in other countries. A lack of peace and injustice anywhere is a threat to peace for all. So, like with climate change, we need to treat peace like a global issue, and tackle such matters in conjunction. We need to dismantle this structure of violence, and put people, peace and the planet first. That would be a good place to start.

Lastly, I would like to shed some light on how I started and some projects I have been involved in. I began my internship in October 2020 at PNND with Alyn, and learned the important role of parliamentarians and lobbying within the disarmament space. As part of this internship, I became a key member in starting Youth Fusion, and promoting intergenerational dialogue through our Youth Fusion Elders program, thus building communication and mutual learning between youth campaigners and experienced policy makers, including parliamentarians. I also endorsed the move the nuclear weapons money campaign, which is a global initiative to shift nuclear weapons budgets and investments to instead support climate protection and the transition to a green economy, public health and sustainable development. Furthermore, PNND’s Gender, peace and security program is another project that I am involved in, which focuses on the importance of including women in peace and disarmament planning and decision-making, and increasing the reliance on common security and human security rather than relying primarily on military security and national defence. The Ukraine conflict is an example of the failure of relying primarily on national defence and militarism, from all sides, as military victory by either side will not bring peace. Rather, a negotiated solution, which meets the security needs of all sides, is a better approach that is more likely to bring about peace.

Thank you everyone for all the important work you do, and thank you for listening!