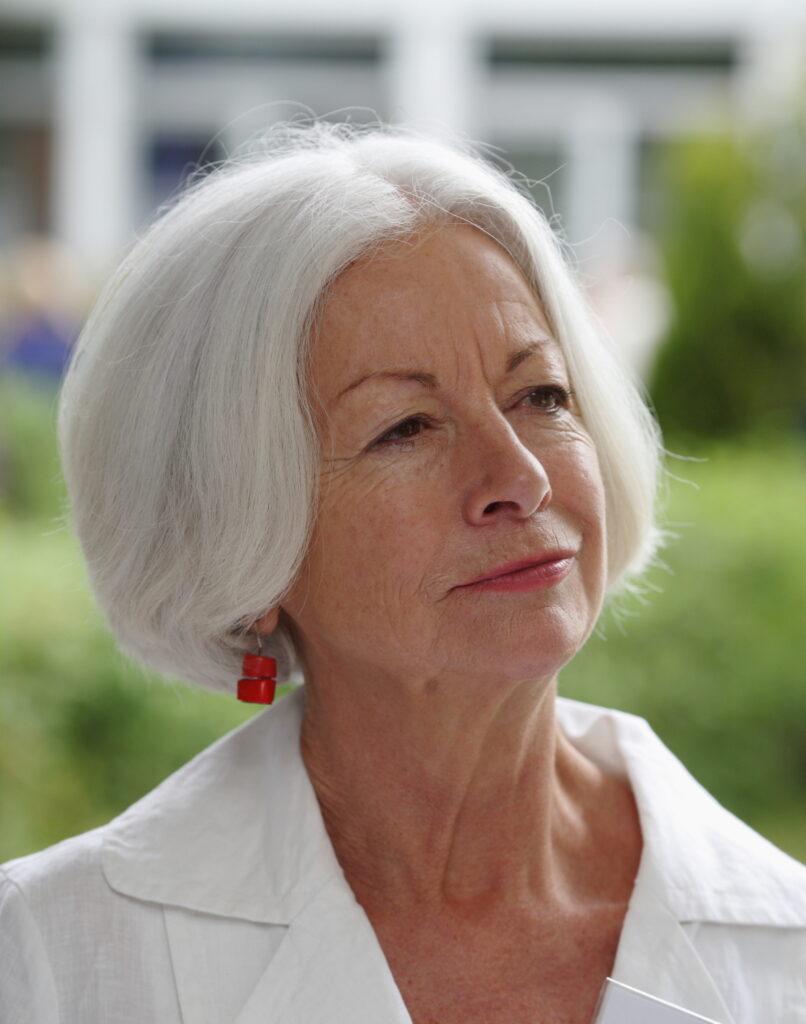 This interview is part of the Youth Fusion Elders initiative, where we create a space for dialogue and learning across generations, topics and cultural and social borders. For this article, Youth Fusion Members Michaela Sorensen and Nico Edwards had the honour to sit down with long-time peacebuilder, changemaker and three-time Nobel Peace Prize nominee, Dr Scilla Elworthy (UK), to have a virtual conversation on the drivers behind and lessons learnt during her long career in service of non-violent peacebuilding, cooperation and compassion.

Do things that are really focused and that, by the time you have devoted all that time and care, you have produced something which will cut eyes. You want to be useful, you want to contribute. My advice is: only invest your time in things that are very concrete.

At the age of 11, Scilla went out into the woods by her family home equipped with a shotgun. Her older brothers had just taught her how to handle it, and she felt strangely empowered with this new knowledge. She pointed the gun upwards, fired and down on her head came pieces of stick, egg, baby chick and the sky blue feathers of a mother bird. The shock that came over her, suddenly aware of the violence she was capable of, was so strong that she went home, put the gun away and never touched it again. Scilla remembers this as a defining experience in her life, a realisation of the sources, horrors  and arbitrariness of violence that led her to wed her life to its prevention.

Through the course of her career, Scilla founded the Oxford Research Group to promote effective dialogue between nuclear weapons policymakers and their opponents; she founded Peace Direct, an international charity dedicated to stopping wars, one person at a time; and she is the co-founder of Rising Women Rising World and FemmeQ, two initiatives focusing on bringing back ‘feminine intelligence’ – consisting of compassion, deep listening, intuition, inclusivity and regeneration – into governance and policymaking.

Youth Fusion. Throughout your career you have combined your academic side with a strong policy orientation and activism, which for instance found expression in your founding of the Oxford Research Group (ORG). Could you tell us about how the ORG came about and what your experience has been running it for the good part of two decades? What recommendations would you give to youths today who try to find ways of combining their research interests with their peace or disarmament work?

Scilla Elworthy. I ran the ORG for twenty years, and during that time we found out how nuclear weapons decisions are made in all the then five nuclear nations, and subsequently in India and Pakistan. I had been working at a UN peace and disarmament conference in 1982 and I was really shocked that no progress was made at all, and as I was straphanging on a tram on Broadway a voice in my head said, ‘you are talking to the wrong people. At the moment, these people at the UN can’t do anything about this issue – you have to find out who really makes the decisions on nuclear weapons.’ And so I thought, well who are they? I did not know. Then I began to think about it and I thought, well, it must be the people who design the warheads in the nuclear weapons laboratories, the military who stategise with the weapons, the intelligence people who supply the rationale for having a new weapon, the people who actually deploy the weapons and the people who sign the checks for them, and, ultimately, the politicians who make the decisions.

It took us four years to publish our first book, which was called How Nuclear Weapons Decisions Are Made. And… [chuckles] it did not exactly become a bestseller, yet every office of every decision-maker that I went into, there it was on the shelves, heavily thumbed, because nobody in the business knew how the whole system worked. Then we began the business of getting in touch with these individuals, and trying to get them to meet and talk to each other. We failed miserably at first, but I realised that if I could make personal contact with these individuals everything would change; and indeed, it did. Through my doctorate I  interviewed thirteen of the British nuclear policymakers, and in that period they got to trust me. When I then invited them to a meeting that would be entirely off the record, they agreed. Gradually the word went around that we were trustworthy and people could come to these meetings almost incognito, and as they did, they finally took their jackets off, loosened their ties and began to talk and really listen to each other. This way, we were able to lay the basis for what eventually became a couple of treaties and that is what the Nobel Prize nominations were for.

So, the recommendations I would give [to concerned students today] is to use your research interest to find out how things really work, find out who is making the decisions, and get in touch with them.

Youth Fusion. At some point in this journey you produced a ‘Who’s Who’ book where you drew up the biographies of 650 nuclear policymakers, of whom 645 were male. The Oxford Research Group was also in part established to foster effective dialogue between nuclear weapons policy-makers worldwide and their critics. Drawing on your experiences with fostering effective dialogue between these men, how did you learn to navigate the dynamics that come with being part of such policymaking rooms, surrounded by high-level male decision-makers who did not agree with each other but whom you yourself might not have agreed with either?

Scilla Elworthy. Well, you put your finger on what was difficult because I was very often the only woman in a room of two- or three-hundred men. When I asked awkward questions… for example at one meeting in London, which was on British nuclear weapons costing for the new Trident scheme, I knew that they had not included the costs of decommissioning those weapons. So I raised my hand to ask that question, and before I had even finished the preamble framing my question, the chairman said: ‘What’s your question madame?!’ in a very loud voice, and… it is scary! I am sure I blushed and stammered, but I went on and asked my question and there was a terrible silence because they knew it had hit the spot. You have to do your homework! Students today know this, that if you really know your stuff, and if you have the courage and the presence to take a stand on what you mind about, you will make an impact.

Students have far more rights now than they had thirty or forty years ago. Use those rights! Go to those meetings, put your hand up, ask the awkward question and hope that you get a stunned silence because that means you hit the mark.

Scilla Elworthy. Well, I wrote it because over the years we have accumulated so many examples of where non-violent approaches to armed conflict have worked, and they always cost very little. So, I rounded up twenty-five such examples, wrote them down together with their cost, and calculated what it would cost to scale them up over ten years. The whole thing, all those twenty-five initiatives would cost only two billion US dollars – and if you look at what we spend on armaments, that is nothing. The book has had quite a big impact, I can’t measure this impact, but, people are getting in touch with me constantly because I was able to back up with fact the assertion that non-violent approaches to conflict work better and cause far less fallout, than using weaponry and violence.

Youth Fusion. Why do you think that current approaches to peace and conflict are still so masculinized and turn to expensive means of military equipment when there is proof out there that more peaceful approaches are way more cost effective and have better long-term outcomes for positive peace?

Scilla Elworthy. Simple answer my dear, most of those making decisions are male. Bless them, for they are inured in the idea that weapons are the way to deal with things. There is a huge amount of education to be done here, and it is a matter of putting your thoughts into the media as fast and as eloquently as you can. Start running a blog, keep on social media with these ideas, and get into the institutes where these debates take place, have your question ready and put your hand up. It will stress you out the first time you do it, but you will get used to it.

Youth Fusion. In creating the Youth Fusion Elders program we were inspired by the original Elders initiative that you were part of creating. What is the value or role of intergenerational communication and learning in creating the kind of change that we need and want to see in the world?

Scilla Elworthy. It is huge! It is inestimable, the value of that intergenerational communication. But I think the role of people your age is to be very blunt about what you want to see. Innovationary stuff does not really work anymore, unless you are a great spiritual teacher. But you as young people you have the right to lay down what you want to see very precisely.

For example, if I were to ask you ‘How would you build down the nuclear weapons in the world today, stage by stage? If the amounts that are currently spent on nuclear weapons were spent on preventive diplomacy, on using the armies of the world to prevent armed violence instead of attacking it with kinetic means, how would that work?’ Can you answer these questions?

You need to have proposals to put forward that the Elders can use. Then they can say, there are this many hundreds of thousands of young people who want [to see this particular change happen] – what should we do about it?

Throughout her life and career Scilla has been celebrated for the infinite creativity with which he has laboured for the advancement of local to international peacebuilding and the promotion of effective non-violent decision-making. Her message is perhaps the most powerful: that if we all start by finding peace within, we will have the capacity to do so for others as well. We can all live and be the positive change we wish to see in others.

My experience is that the availability of cheap weapons is what fuels war. So let us imagine that something happens that has happened with the trend to divest from fossil fuels to invest in renewables. It has changed everything. Now, if you can find ways of putting forward evidence that investing in the prevention of conflict is more effective than investing in weaponry – then you have got a strong case to make.

This interview was carried out by Nico Edwards and Michaela Sorensen, Youth Fusion Co-Convenors and interns at Parliamentarians for Nuclear Non-Proliferation and Disarmament (PNND). You can listen to the full conversation in our Youth Fusion Elders podcast series, through a platform of your choice.

To learn more about Scilla’s many projects and join her Peace is possible! community, visit her website. For anyone interested, learn more about and order her book The Mighty Heart – How to transform conflict here, and The Business Plan for Peace – Building a World Without War here.