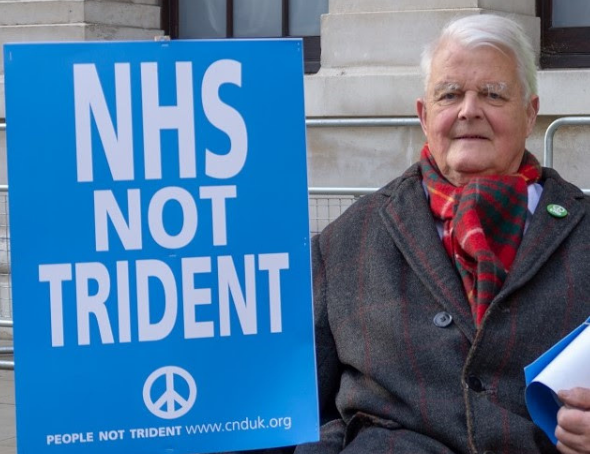 This interview is part of the Youth Fusion Elders initiative, where we create a space for dialogue and learning across generations, topics and cultural and social borders. For this article, Youth Fusion Member Nico Edwards had the honor to sit down with lifelong peace campaigner and changemaker Bruce Kent (UK), to have a virtual conversation on the highlights and challenges of his long career. Even if Bruce insisted that there is no “Peace Bible” to religiously stick to – Nico did have the strong sense that their conversation had just provided her with one.

At the age of 91, Bruce still carries on his unfaltering work in the interrelated fields of peace and disarmament, sustainable development, climate justice and social equity. Across six decades of peacemaking, he has become perhaps the most prominent Catholic peace activist in all of Great Britain. As he tells it in our conversation, Bruce’s introduction to the peace world did not happen until after he was ordained into priesthood and first got in touch with Pax Christi (the Catholic Movement for Peace). Via Pax Christi, Bruce met a – in his words, “very interesting and impressive” – Jesuit Archbishop who asked Bruce, “Do you think it’s moral to be willing to kill hundreds of thousands of people if you get an order to do so?” Upon firmly answering no, the Archbishop went on, “Well, that is what nuclear submarine operators have to be willing to do.” Bruce’s reaction to this was so strong that he was soon involved with a number of campaigns, from Campaign for Nuclear Disarmament to the International Peace Bureau and beyond – and so, Bruce set out on his journey as a peacemaker.

Youth Fusion. Has your faith always been at the root of your becoming a part of, including your ways of navigating within, the peace and disarmament world?

Bruce Kent. I think so, I respect people from whatever religion, but I was brought up and remain a Roman Catholic still today and I have a great respect especially for our present Pope Francis, who is saying so many sensible things. I’m not embarrassed about being a Catholic, I know that I’m not without criticism of my church, but then I’m not without criticism of anybody! And part of my religion is loving your neighbour whatever flag they happen to be waving. When the United Nations charter began, there were about 50 nation states – and now there are 190 something! We keep dividing the world into other bits but they are not enemies, they belong to the same community, the same globe. That’s my position on it and the idea of slaughtering tens of thousands of completely innocent people in order to keep the so-called “peace” is absolute nonsense.

Youth Fusion. There are loads of examples now with youths working at the intersection of religion and peace campaigning, especially related to climate action and working towards combining disarmament and the sustainable development goals. Do you have any recommendations for how to navigate these intersections?

Bruce Kent. I think you brought up a very interesting issue here, because yes, there is a lot of activity about climate change and it’s very impressive – but what is interesting is that so rarely do you get the connection made between militarism and climate change! The world is now spending around 2 trillion USD a year on military budgets, and the manufacture of weapons is an enormous cause of the output of CO2, which exacerbates climate change. I find it quite interesting today, the way in which so much climate change language does not talk about the military aspect of the world we are in. I had a talk the other day with someone from a big British charity, congratulating them on all the work they are doing in Yemen, excellent work! But then I asked if they would like to join us in objecting to the supply of bombs to Saudi Arabia that makes the bombing of Yemen possible, only to be very politely rejected. Apparently, they could not get into “that sort of thing” because they enjoy a charitable status in the United Kingdom – which made me realise that some things are not being faced up to, because if you have a too strong opinion as a charity in the UK you risk losing your charitable status and all the funding and status that goes with it.

“Ultimately, I do think that the debate on climate change is not going to be effective unless it includes militarism as a global phenomenon.”

Youth Fusion. Having served as the General Secretary and President of such flagship organisations as Campaign for Nuclear Disarmament, International Peace Bureau and the Movement for the Abolition of War, was your experience of advocacy work in the 1980s very different from the context of today?

Bruce Kent.  The 1980s were a time of constant crisis with real dangers, but those dangers have not gone away today. Just because there aren’t any more Stanislav Petrovs there are still 15 or 20,000 nuclear warheads! The number of accidents and mistakes with these things… I’m absolutely terrified. You would have to be mad to want to use a nuclear weapon but there are many people willing to use a nuclear weapon if they are ordered to do so. In the 80s, every little village had somebody concerned with CND and it remains an active group today, but the dangers are not so obvious as they were back then so CND has not got the numbers that it once had – but that does not mean to say there isn’t a danger! There is a very big danger even today, because it only takes one idiot to do a stupid thing and then we are into general war. So, the issue hasn’t gone away but the means of communicating that to other people is more difficult.

Youth Fusion. In the context of today, what are the best means to make sure this message is communicated correctly and effectively?

Bruce Kent. I think it’s really important to link disarmament to other issues, you can’t really have a charitable organisation that ignores the fact that we spend nearly 2 trillion USD a year on war! You have to bring these issues together, though, there are other forces trying to push them apart so that you don’t talk about it: but I think it’s our job to press them back together. If we take the UK as an example, the idea of reallocating the 205 billion pounds we’re now spending on more nuclear weapons to the National Health Service – which is dealing with this Covid crisis – I think that’s a message anybody can pick up. You don’t have to be a Nobel Prize winner or an academic genius to pick up an issue like that. We all have imaginative things to do to change the current climate. The problem is that a lot of people think you can’t talk about nuclear weapons unless you are Professor Somebody or Professor Somebody Else! I’m never going to be a professor, I’ll be going upstairs long before then – but I think everybody’s got a voice and they should be using it. Passivity is one of the great diseases of today. You sit down and you wait for an expert to tell you what to do and that is completely ridiculous!

Youth Fusion. What would be a lesson learnt and advice you’d like to give to the youths hoping to live up to this task today?

Bruce Kent. Well, I was active as a Catholic priest for a long time but I decided to retire when I realised that it was becoming impossible for me with the atmosphere in my church to continue to be an active member of CND and Pax Christi whilst also being a priest – that is, a person who was meant to remain neutral on these issues. But this was a very very big choice for me to make, so all I’m saying is: you will all be faced with big choices in your lives and when you come to one – don’t hesitate to jump! Jump over the fence! It will cost you some tears, it cost me many tears, but I realised at one stage that there is nothing else I can do within the world I’m living in. Everybody, whoever you are, has to make choices in your life as to which way you want to go forward – and you want to go forward in a way that brings the most good to the most people.

Unsurprisingly, throughout his life and career Bruce has been celebrated for the infinite creativity with which he has laboured for the advancement of peace and social justice. First and foremost, however, during our conversation I was touched by his ability to not only preach about the need for tolerance and inclusivity – but actually himself embody what it means to be a person of faith, politics and solidarity in one. His is the story of how we all have it in us to live positive change. To that end, we will finish on this rather bold note:

“I think that one of the biggest sins that is not talked about enough, is that of being a millionaire – and I think being a billionaire is an even bigger sin! I’m afraid I’m not going to ever be a millionaire, but I don’t, in all honesty, know why anybody thinks that they have the right to that much control over human resources. I don’t think it is right and I think that we should all be trustees of what we own. We are not freeholders but shareholders of one small planet.”

This interview was carried out by Nico Edwards, a Youth Fusion Member and Research and Policy Assistant at Parliamentarians for Nuclear Non-Proliferation and Disarmament (PNND). You can listen to the full conversation in our Youth Fusion Elders podcast series, through a platform of your choice.

To learn more about how to advocate for nuclear disarmament as a religious person or group, enjoy this Guide to Action by the Basel Peace Office and Religions for Peace.