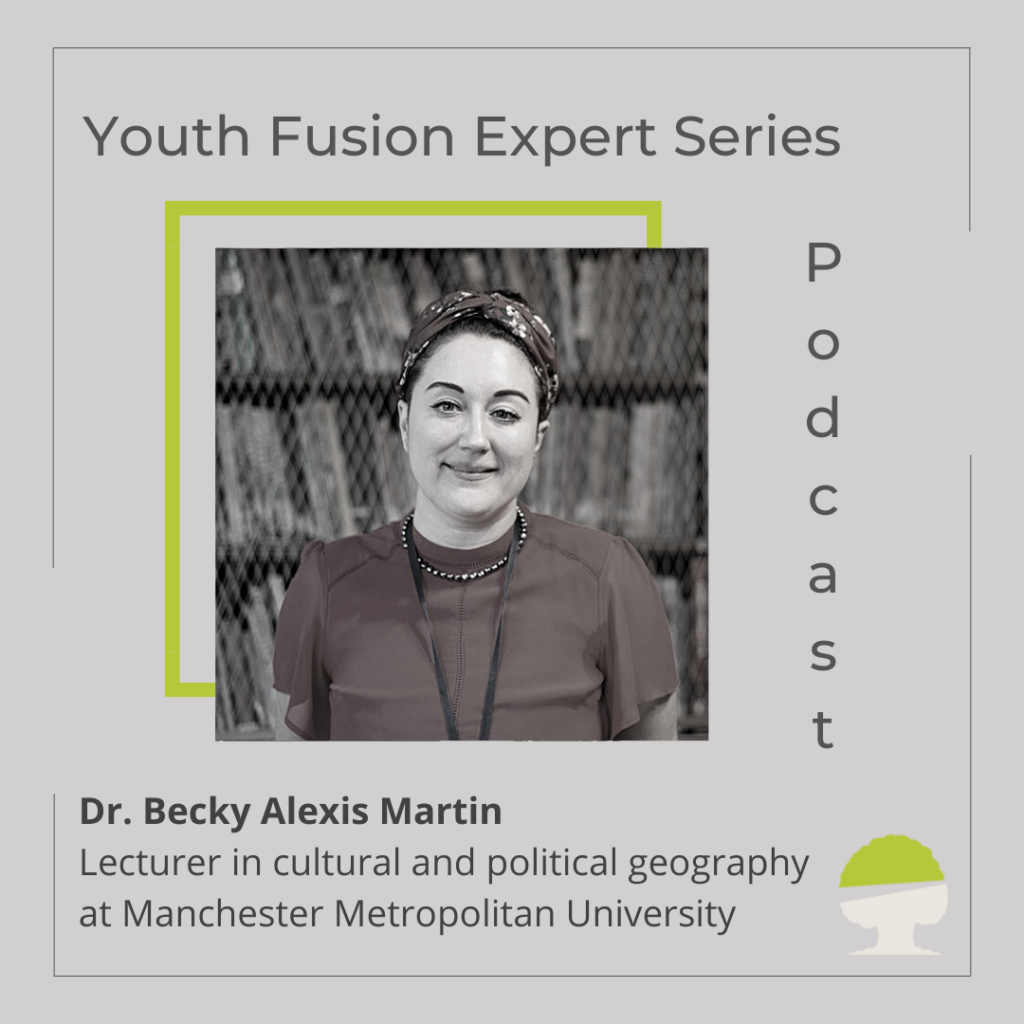 Welcome to the Youth Fusion Experts Series, a podcast where we engage with leaders and experts in the various related fields of nuclear disarmament, peace and security, and sustainable development. Through these conversations, we wish to offer you all the chance to learn and be inspired by those who are actively working towards a fairer and more peaceful future for all.

Michaela Sørensen, a core member of Youth Fusion, had the honour of interviewing Dr. Becky Alexis-Martin, who has been involved with nuclear related issues for many years and has an impressive plethora of work on some pretty niche topics- which is what we love around here at Youth Fusion- we are all about niche and nuance! Just a quick snippet of information before we start, Dr. Becky was in Vienna for the MSP while this interview took place, and Michaela was fortunate enough to meet up with her there a few days later where they were on the same panel about The future of youth engagement with the TPNW!

Dr. Becky Alexis-Martin is currently a Lecturer in Cultural and Political Geography at Manchester Metropolitan University. On top of this, she is also the Principal Investigator of Nuclear Families, which is a large-scale, multidisciplinary social sciences project exploring the lives of British Nuclear test veterans and their families, as well as being the Principal Investigator of Atomic Atolls, a study that explores the colonial necropolitics of the South Pacific.

Her work mostly centers around geography, wherein Dr. Alexis-Martin chose nuclear geography as her main field of focus as it offers a uniquely spatiotemporal and human perspective upon some of the critical issues of our time, including defense, energy production, emergency, security, home, family and activism. Building on this, her doctoral research examined differentials in radiation exposure to different demographics during hypothetical nuclear accident scenarios. In relation to this, Dr. Becky Alexis Martin’s other academic work has explored the psychosocial impacts of radiation emergencies upon female survivors, the perceptions of risk associated with ionizing radiation exposure, and benefits of digital communities for radiation emergency survivor support.

Before joining the academic space, Dr. Alexis-Martin worked in emergency planning, where she gained the complementary practical experience of radiation emergency preparedness, which we think is very cool! Furthermore, Dr. Alexis-Martin is an enthusiastic science communicator and has previously spoken at the Royal Geographical Society, International Geosciences Union, PHE, and The University of Leeds, and has produced high-quality international science journalism for publishers including The Guardian, The Independent, The Conversation, UCAS, and BBC Future, as well as being the author of the book, Disarming Doomsday: The Human Impact of Nuclear Weapons since Hiroshima. We highly recommend you check out her work!

Check out Dr. Alexis Martin’s website at https://www.nucleargeography.com where she has a plethora of resources on nuclear related issues for you to read up on!

That’s a good question! I began my graduate career as an emergency planner – and I worked across multiple risk plans – so my work included supporting severe weather and pandemic plans too, for example. It was a fast-paced job and I worked with a very supportive team, across emergency responders – so – on a day to day basis I might work with police, fire, ambulance, and relevant voluntary organizations, for example.

Working on offsite emergency planning for nuclear accidents made me acutely aware of the low likelihood but extremely high impact  risks that are created by nuclear installations to the people who live nearby them. There were issues that seemed unresolved at the time, for example, how did we understand exposure to the different demographics of a population if there was a nuclear accident – and what were the best pathways to support? My PhD tried to solve this issue by developing a new spatiotemporal model for radiation protection. While I worked on my PhD, which was really computational, I became aware of the different communities who have been affected by nuclear accidents and warfare. I was drawn towards learning about their lived experience – and the rest is history, or rather, geography…

Geography relates to everything in space, place and time, so it offers a strong framework across which to navigate nuclear issues. I apply geographical concepts and ideas to expand upon and develop our understanding of the nuclear. Sometimes, I have to develop completely new ideas to be able to describe particular nuclear phenomena! For example, when I undertook an ethnography, a visual study and essay, of non-radioactive nuclear waste that was re-purposed for educational and novelty purposes from places such as Los Almos Nuclear Weapons lab  – I called this material “para-nuclear waste” due to its unique cultural description. I have produced two collaborative nuclear review papers since my first event on the topic, namely my “Nuclear Geographies” sessions at the Royal Geographical Society in 2016 – which were the first nuclear geographies sessions. I learned a lot from the brilliant academics in humanities that came before me though, for example, Professor Stephanie Malin in Sociology and Professor Gabrielle Hecht in History.

a. Your role as the Principal Investigator of Nuclear Families, and the project.

This was the first project that I was a Principal Investigator on. I won funding to undertake a social study of UK military communities affected by nuclear weapon testing and their families, in 2015. The project ran from 2015-2018 but I collected so much data that I’ll be publishing from it for a long time! I collected oral histories and undertook interviews with nuclear test veterans, the men who tested the UKs nuclear weapons during the Cold War, and their families, to learn about how nuclear weapon testing had affected their lives – thinking about health, wellbeing, disability, and impacts to family dynamics – for example the role of nuclear test veteran wives as carers, and the frequency of divorce among these families compared to others. I produced a public report in accessible language 2019 that gives some useful insights and is available to download for free online.

b. Your role as the Principal Investigator of Atomic Atolls, and the project.

This project has been my passion since 2018! I was fortunate enough to spend some time in Kiritimati and Fiji before COVID. I am now working toward a decolonial study of the Kiritimati nuclear weapon tests, also known as the Christmas Island series. In the late 1950s and early 1960s, these enormous thermonuclear bombs were tested on Kiritimati by the UK military – the nuclear test veterans. This work was undertaken without supporting or moving the local community of people who lived on the island then – and still live there now. My passion is facilitating their stories to be shared – and I will be publishing my first paper with my research interviewees as co-authors to reflect this participatory co-production by the end of the year.

Thank you for your generous words! I have been lucky to work with some amazing editors, but it is hard to ensure that my voice – and therefore the voices of the scholars and communities that I work for and with – are heard. Thankfully the places that I write have always welcomed my contributions.

Thank you! I studied natural geosciences and environmental sciences before I undertook my PhD – so I approach my cultural, social and political work through a scientific lens. It has been a pleasure and a privilege to support public understanding of nuclear issues – through multimedia journalism and media consultancy.

I think that foremostly, high-quality and accurate journalism are essential for the public to understand issues that can sometimes appear complex. One of the challenges of achieving successful future disarmament is determined by public education and perception of nuclear weapons. Many people are just not aware of the historical harms and dangers of nuclear weapons – or of the global chain of environmental, social and health damages that arise during contemporary nuclear weapon manufacturing. From the extraction and mining of uranium to the management of radioactivity, where some isotopes survive for countless thousands of years, there are still many scientifically evidenced issues that arise due to nuclear weapons. I would go as far as to say that truly scientifically literate societies would not accept the persistence of nuclear weapons – because there would be a consensus relating to their harms.

I sometimes reflect upon the understandings of the great science communicators – the physicists and mathematicians, Bertrand Russell and Albert Einstein – who were pacifist and absolutely against the maintenance of nuclear weapons, as weapons of mass destruction, to show that science communication is so important! They led the early pushback against nuclear weapons, a response that is ongoing to this present day  – and that as a pacifist scholar – I am very proud to play a tiny part in.

I want everyone to understand that nuclear weapons aren’t just a senseless supposed deterrent and an enormous waste of money – but that they are here at this point in time due to a legacy of colonial, humanitarian, and environmental violence by nuclear weapon possessor states. I want everyone to realize that there are other options, that we could disarm, and that we must challenge nuclear weapon possessors if we wish to move forward from our violent past to a more peaceful future. I also want to share the sheer scope of nuclear warfare – and its subhumation into popular culture.

It has been such a pleasure to share my own experiences with you as an established academic and author – but please don’t forget that we all start somewhere. Don’t you dare think that you can’t! You are our future and we need you! The youth of today will become the great pacifist innovators and creators of tomorrow – and I have no doubt that you will find solutions to peace problems that we are still tackling. It is my privilege to be able to share my experiences with you, as our next generation of thinkers, writers, and policy-makers. My advice would be to pursue your passions, study hard, make the most of your personal talents before anything else – and to embody the change that you want to see. If you become an excellent writer, artist, or scientist, for example, then you are one step closer to changing the world.