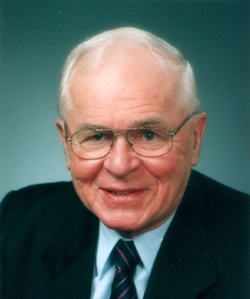 A bit about Roche

Douglas Roche  started out as a journalist and was morphed to speak into parliament while elected at a fairly young age. When he was in parliament in Canada he had traveled a bit studying development issues in Bangladesh. Shortly after this, he found himself in Hiroshima where he saw in the museums the full force of nuclear weapons destruction. These two issues came crashing together in his head, leading him to engage with the development process necessitated by the destruction of nuclear weapons: how to rebuild people’s lives? How to enact disarmament for development?

He then decided to work and concentrate on the issues of peace and human security through the prism of development and disarmament. So he left parliament, and was appointed as the ambassador for disarmament for Canada. Later he became chairman of the United Nations disarmament committee which in addition to being an honor was a tremendous learning experience as he went around the world. Working on disarmament missions and talking to governments became a defining theme of his life. After his 5 years’ term as disarmament ambassador was over, he started to write, focusing on human security particularly from the point of view of a global conscience.

Linkages between nuclear weapons, the COVID-19 pandemic and climate change

Roche has become highly aware of the linkages between climate change  (including the threat of global warming) and arms, wars and military institutions. The pollution caused by military operations makes this link rather apparent. He expanded this analysis to encompass some of the greatest threats facing humanity: nuclear weapons and the aftermaths of the Covid-19 pandemic. The Secretary General of the United Nations, Antonio Gutierrez, says that COVID-19 represents a global crisis which we have not seen in 100 years. The combination of these three threats (nuclear weapons, climate change and COVID-19) has provided a global crisis of immense proportions. Roche thus argues we have to approach these crises in an integral manner: working one-dimensionally is not enough.

Roche thinks the major threats to our common security are interlocked and need to be addressed together, creating a platform for change that starts off with common security and the notion that we all have the right to a secure existence, including things like water, education and peace. Our canvas is a necessarily broad one.

With 7 billion people in the world, there are a lot of things to focus on. However, Roche believes that we should strive to narrow down our focus from including a military security agenda to one wholly built around human security issues, that is, the  wellbeing of each human being. The cost of militarism went up 2% in 2021. If the government spends 2% more on public health during COVID-19 pandemic instead of the military, the situation will change a lot.

During the Cold War in the 1980s then US President Ronald Reagan and the United States and then President of the USSR, Mikhail Gorbachev were discussing nuclear problems. They realized that a nuclear war can never be won and must never be fought. It is a core idea that enables us to stand on some common ground, still today. Roche also highlights John F Kennedy’s speech at American University not long before he was assassinated, where he said “you know we all stand on the same planet and we breathe the same air”. It was a startling realization at the time that despite our differences – the political differences that are exaggerated so much by the media, tactics by ambitious politicians and not to mention greedy business elements – we need to realize that these might all be false differences. The Prime Minister of Sweden who led a United Nations Commission in the 1980s gave this way of viewing the world and international politics a name: common security. No one country can have security by itself unless all have security. Roche thus finds it helpful to  look at nuclear weapons in this respect, arguing that there can be  no security by having nuclear weapons.

What do we do about the fact that  a person can be born in one part of the world being denied by circumstances of birth access to the elements of a healthy life, when another person in another part of the world is given a free ride on everything to help that person develop? The inequities and injustices in the world have to be addressed in a common agenda, Roche argues. There is a great need for a global ethic.

This is why the United Nations was formed after World War 2 to save humanity from the scourge of war. One of the startling lessons Roche learned as a parliamentarian in his years was how difficult it is to get the government focusing on problems upstream before they have exploded. Roche is arguing that many governments have an inbuilt shortcoming: instead of identifying and addressing the root causes behind crises, be they military, political or humanitarian, they attempt to throw money at the problem seeking only superficial solutions. This applies both to worsening international political tensions through increasing investments in nuclear weapons, when the focus should really be on averting the humanitarian catastrophe of any potential nuclear weapons use, as to the tendency to solve “underdevelopment” in the Global South through sending aid without addressing the unequal global trade conditions that is to blame for much of the poverty across the Global South. The common security agenda addresses all of these issues and recognises their shared root causes.

Military status quo: US vs Canada

More recently we saw Biden has demanded for military spendings that is even higher than the Trump administration. So are we really going in the right direction with Biden, Roche asks? Is Joe Biden the person to change the military status quo? Roche thinks that Biden recognizes cooperation and multilateralism are the only sensible approach to dealing with problems. He has got the military industrial complex (MIC) breathing down his neck, which then US President Eisenhower first warned us about in 1961 confirming that those perpetuating the interests of the MIC are voracious. Why there’s never any great fight in the Congress about the defense budget is because much of the decisions are all cooked up beforehand and agreed to by those who are themselves benefiting from the large military revenues. Roche is hopeful that Biden is seeking to rebuild the structures of America, in a way that addresses the need for  improving the conditions of life in the US, including aspects like  childcare and eldercare. Health care is a reflection of a respect for and belief in  a common security agenda. Roche thinks other countries should support Biden in his effort to enlarge the world agenda of cooperation and provide more funds and more political direction for measures that help people to get real security.

In the 1980s, the father of Canada’s current Prime Minister , Pierre Trudeau, was a champion of nuclear disarmament. He went around the world to the capitals of the permanent members of the Security Council, pleading with them to desist from the nuclear arms race. He also advocated for the Canadian government to go to NATO to have them re-examine their nuclear deterrence policies. A few years later the government actually pursued NATO on this matter, and Canada made a deliberate decision to stay out of NATO’s nuclear doctrine. Roche believes however that Canada is not living up to its full capacity and potential, and in a chapter in his book he states very clearly that Canada is stepping back from its full participation in peacekeeping thus going in the wrong direction. This can be seen in the Canadian government’s rejection of the new Treaty on the Prohibition of Nuclear Weapons, which reflects a lack of political will with regards to disarmament. Roche is therefore disappointed that Canada’s involvement in the problem for the modern world lacks the energy and the vision that it has historically displayed.