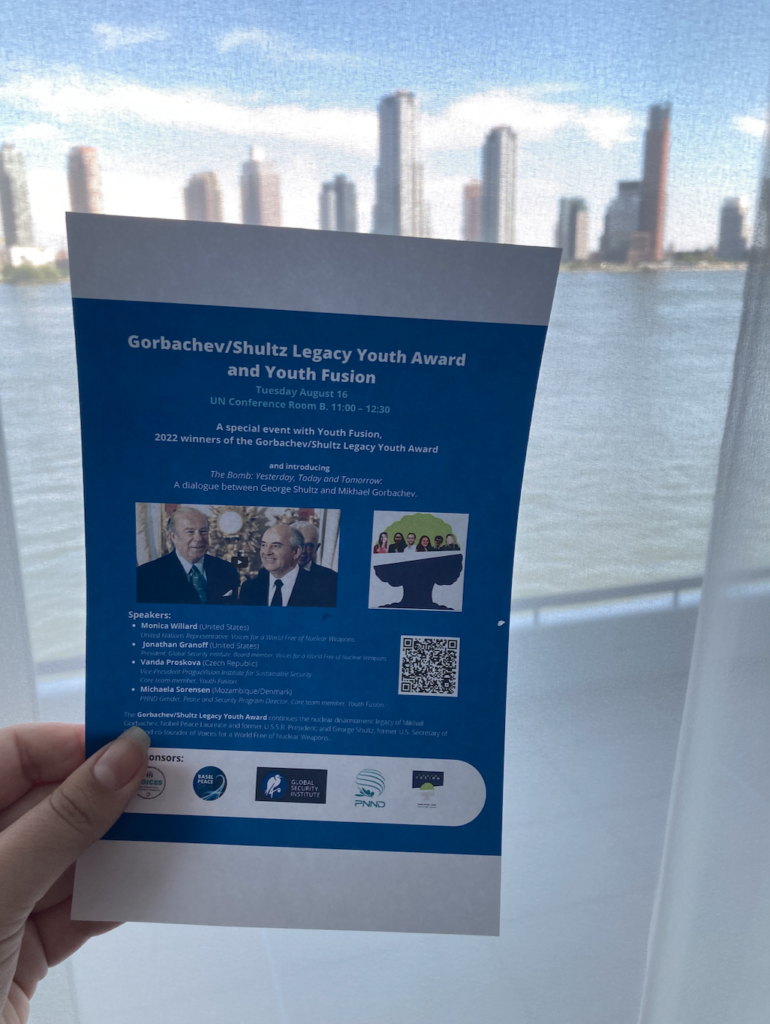 After a weekend of recharging, Michaela and Vanda had a very busy couple of days ahead of them. In the morning, Michaela went to see the 9/11 Memorial Museum, and Vanda caught up on her work obligations. Thereafter, they met up at the UN Headquarters with Alyn Ware in the afternoon to plan their next day’s event, the ‘Gorbachev/Shultz Legacy Youth Award – Youth Fusion’, that was planned to celebrate Youth Fusion winning the award. Vanda and Alyn printed out some flyers at Staples, and so the team spent some time networking and handing out the flyers to promote the event, too. Vanda and Michaela grabbed some lunch at the UN cafeteria, and then went to Conference Room B with Alyn to do some planning for the event as they planned to livestream it. Michaela and Vanda also managed to fit in an interview with Alyn for the Youth Fusion Instagram on the importance of an intersectional and intergenerational approach within nuclear disarmament, as well as youth involvement.

In the evening, Michaela and Vanda met up with some friends to have some dinner at an Italian restaurant in midtown, and got an early night for the big day ahead of them.

The big day arrived! Michaela and Vanda got an early start and made their way from Brooklyn, with all their luggage, to the Global Security institute (GSI) office as this was their last day in New York. They got some breakfast and coffee from Dunkin’ Doughnuts on the way to the UN HQ, and spent the time before the event talking to people at the conference, getting some last-minute content for the Youth Fusion social media, and preparing for the ‘Gorbachev/Shultz Legacy Youth Award – Youth Fusion’ event in the afternoon. The Youth Fusion event’s partners were PNND, Global Security Institute, UNFOLD ZERO, Voices for a Nuclear-Weapon-Free World.

The event was a great success with a near full room in Conference Room B and 48 attendees online. Speakers included Alyn Ware as the chair, Jonathan Granoff, Audrey Kitagawa, Michaela Sørensen and  Vanda Prošková. There was also a screening of an excerpt from the powerful short film: The Bomb: Yesterday, Today and Tomorrow, that showcased the special relationship between Shultz and Gorbachev that played a key role in deescalating Cold War tensions and making great strides in nuclear disarmament.

The event encompassed the true meaning of intergenerational dialogue and using human security as an overall framework to achieve nuclear disarmament, and taught us all to never underestimate the power of human relations in achieving our goals and peaceful outcomes. We all have a lot to learn from one another, from intergenerational, intersectional to interdisciplinary approaches. Youth Fusion is honoured to have been chosen for such a prestigious award, and are committed to making the world a safer and more sustainable place for all through youth empowerment.

The event was livestreamed and can be found here.

After the event, Vanda and Michaela managed to fit in 3 interviews for the Youth Fusion Instagram, did some last-minute networking, said their goodbyes, and headed to the GSI office to collect their luggage and headed to the airport. What a past 10 days they had! Both Vanda and Michaela are truly grateful for the privilege of being able to come to New York and attend the NPT Review Conference in person, and gained a lot from the experience.