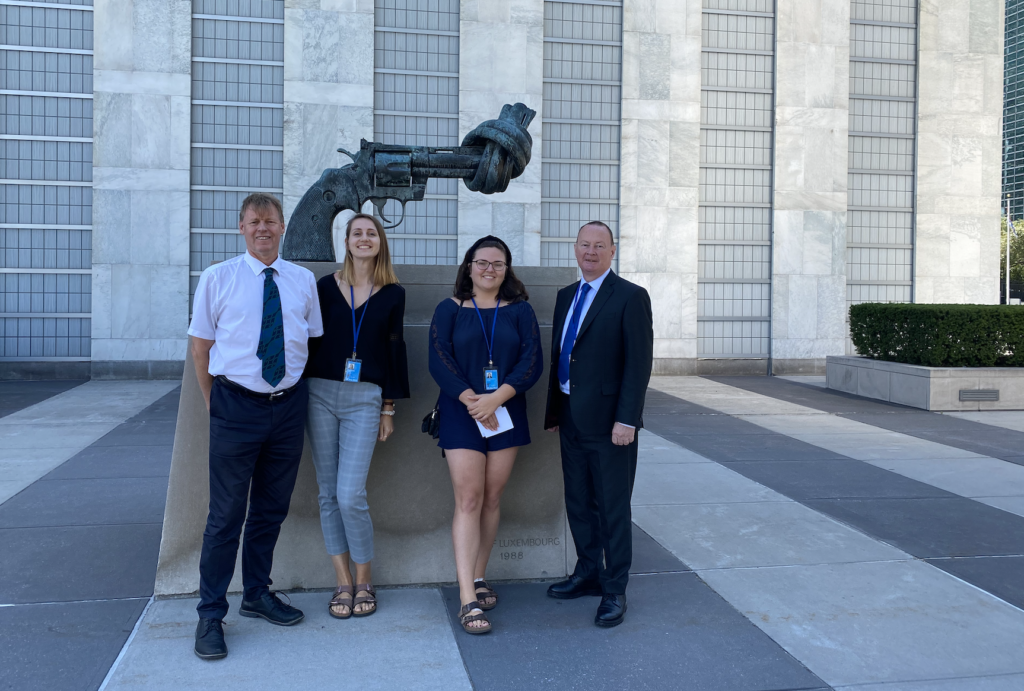 On Thursday, Michaela and Vanda had an eventful day as one of their main events were taking place in the afternoon session in Conference Room B at the United Nations Headquarters. They got up early, grabbed some breakfast and headed from their accommodation to the Global Security Institute (GSI) office, with their bags, as they were changing accommodation from Queens to stay with one of Michaela’s school friends in Brooklyn. After all their logistics were taken care of, they headed to Staples to print out small flyers for their Youth Fusion social event on Friday.

Once at the UN, Michaela and Vanda handed out the flyers, did some networking, and hung out at the Vienna Café with Bill Kidd and Alyn Ware to discuss their event in the afternoon, ‘Advancing the Climate – Nuclear Disarmament Nexus through divestment, human rights and law’ that Youth Fusion partnered with in conjunction with Basel Peace Office, PNND, World Youth for Climate Justice, and the Permanent Mission of Vanuatu to the United Nations. After some planning and doing some trial runs in Conference Room B after lunch, everyone was ready for the event.

The speakers of the event included H.E. Mr Odo Tevi (Vanuatu) who is the Permanent Representative of Vanuatu to the UN and Special Envoy for Climate Change; Saber Chowdhury MP (Bangladesh) as Honorary President, Inter-Parliamentary Union and Co-President of Parliamentarians for Nuclear, Non-proliferation and Disarmament (PNND); Michaela Sørensen (Mozambique/Denmark) as the Youth Fusion Co-convener and Coordinator of the PNND Gender, Peace and Security program; Solomon Yeo (Solomon Islands) as a Core Team member of World’s Youth for Climate Justice; and was chaired by Alyn Ware and Vanda Prošková.

The common theme during the event highlighted the connections between climate change and nuclear disarmament. Mentions of the amount of money being spent on militarism and weapons were indignantly pointed out, as well as the environmental damage done by such investments, and the broader global power structures that have caused so much damage to places, such as the Pacific Islands, that have experienced nuclear testing by members of the P5 and are now currently some of the most vulnerable communities in the face of climate change and rising sea levels. The urgency of the climate crisis was pointed out by all the speakers, as well as the existential nature of both nuclear weapons and climate change. Marie-Claire Graff’s quote, “climate change is a slow-moving nuclear weapon’, was used during the event, wherein comments were made that there are already ‘detonations’ taking place on the part of climate change as sea levels are engulfing various island nations already, and high global temperatures are making certain regions uninhabitable. On top of this, there are few efforts being made, on the part of the nuclear weapons states, to provide justice to the victims of nuclear testing and the damaging role they played in the atrocities of colonialism.

Solomon Yeo, one of the youth speakers at the event as part of the Pacific Islands Students Fighting Climate Change that was the recipient of the 2021 PACEY Awards, gave a powerful account of his experience and work in making the connections between nuclear disarmament and climate change and how he and his colleagues managed to  persuade the leaders of the Pacific Island Forum to take the issue of climate change and human rights to the International Court of Justice. Solomon’s speech was powerful and dynamic as he pointed out that the youth have a right to our common future as we are the generation that are inheriting this earth, and we must have a seat at the table with our expertise and valuable input. In the spirit of intergenerational dialogue, all panelists from different generations shared the same core values and support one another in their efforts to outline the connections between climate change and nuclear disarmament, as the two issues are intrinsically linked.

After a successful event, Michaela and Vanda met up with Nadine-Isabelle Kas from the World Future Council to talk about her role in the NPT Rev Con as well as the importance of youth involvement in this nuclear disarmament space. To see the interview, check out the NPT Rev Con ’22 highlights on our Youth Fusion Instagram account.

After a full day at the conference, Michaela, Vanda and Nadine joined a dinner with some other delegates at a lovely Indian restaurant as some of them were leaving. Thereafter, Michaela and Vanda went home, and walked over the Brooklyn Bridge to put a cherry on top of a wonderful and fruitful day.

After a full week at the NPT Rev Con, Michaela and Vanda were ready to end the week with a bang! They got up early, went to do some touristing downtown on Wall Street to see the infamous Bull and the Fearless Girl statue Infront of the Stock Exchange, as well as the famous Tiffany & Co shop, on the way to the UN headquarters. They also had the most decadent croissant of all times, and truly reaffirmed their experience in the US of everything being the most indulgent and humongous of sizes possible.

Michaela and Vanda used the morning to network and promote their event in the evening at the Global Security Institute (GSI) office a few blocks down from the UN Headquarters. They also had a last UN lunch with Bill Kidd as he was leaving over the weekend. Mr. Kidd left some parting gifts from the Scottish Parliament for Michaela and Vanda, who were absolutely delighted to receive them.

In the afternoon, Vanda caught up with some work while Michaela joined the UNIDIR event: ‘From Pillars to Progress: Gender Mainstreaming in the Nuclear Non-Proliferation Treaty’. As the event description stated: “This interactive meeting on the margins of the 10th Nuclear Non-Proliferation Treaty Review Conference (NPT RevCon) will take stock of progress on gender mainstreaming during this review cycle and identify concrete measures to advance gender diversity, gender analysis and gender equality in nuclear non-proliferation, disarmament, and peaceful uses of nuclear energy.” The event had a heavy focus on gender mainstreaming within the NPT, with representation being the main approach. Therefore, Michaela asked a critical question on how to go beyond representation, and not just use an ‘add women and stir approach’, but to actually implement a genuine gender approach that challenges patriarchal power structures that currently overpower the UN system. Many of the panelists agreed that this was an issue, and recognized that implementation of a genuine gender approach is a problem, across the board. Some panelists provided some examples of working on this, such as being mindful of gendered language and policies around childcare. After the event, it was clear to Michaela that more needs to be done within the disarmament space to go beyond representation and impact to challenge such patriarchal structures that maintain the status quo in regard to the P5 holding the world hostage with their nuclear weapons stockpiles, and their ongoing developments and proliferation of nuclear weapons that violate the NPT and put us all in existential danger.

After the event, Michaela and Vanda had a late lunch at the UN cafeteria, squeezed in an interview for the Youth Fusion Instagram with Alyn Ware, and got going on their Pizza and Nukes social event. They divided the tasks up with Vanda getting the Pizza with Bill Kidd, and Alyn and Michaela going to the GSI office to prepare the outside area. After everything was set, Alyn and Bill shot off to a dinner, and Michaela and Vanda welcomed their guests, where they had around 10 inspiring youths sit around a table and enjoy one another’s company and some delicious New York pizza. The event was a great end to the week where some of the youth representatives of the NPT Rev Con got to mingle and take a little break from an intense and demanding week.

After the event, Michaela and Vanda made their way to Madison Square Gardens to catch a bus to Boston to see a bit more of the US over the weekend, staying with Vanda’s friends who took them around Massachusetts and New Hampshire.