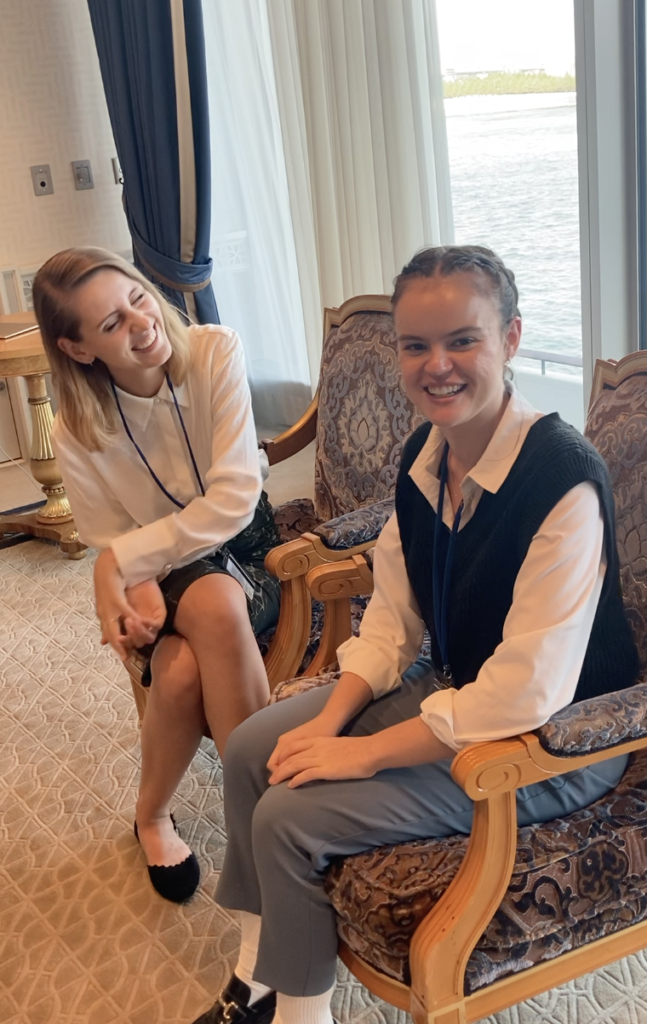 The second day of the conference was not as busy for Michaela and Vanda, so they had a chance to explore New York in the morning and walked through Central Park, sat on the steps of the Met, and got some great views of the Empire State Building and Times Square. After a lovely morning of exploring the city, Vanda co-chaired an online event for Abolition 2000, NWC Reset: Frameworks for a nuclear-weapon-free world, in the afternoon. The event drew upon proposals and analysis in the  Abolition 2000 NWC Reset: Frameworks for a Nuclear-Weapon-Free World, which is a civil society working paper submitted to the 10th Review Conference of States Parties to the Nuclear Non-Proliferation Treaty.  This includes possibilities of a nuclear weapons convention (NWC), a framework agreement and/or protocols to the Treaty on the Prohibition of Nuclear Weapons. It was a very productive meeting with diverse participants from around the globe, where Vanda also highlighted the importance of youth involvement within nuclear disarmament.

After the online event, Michaela and Vanda took a ferry from Manhattan with their week’s metro pass to Staten Island, where they got a fantastic view of the Statue of Liberty, saw a 9/11 memorial, and enjoyed a spectacular sunset on the way back. To finish off the night, they had dinner at McGee’s Bar that served as the inspiration for the popular show ‘How I Met Your Mother’.

The third Day of the Conference for Michaela and Vanda was very busy. In the morning, they met with Alyn Ware and Bill Kidd to organize a few logistics and promote their event on the 11th of August, ‘Advancing the Climate – Nuclear Disarmament Nexus through divestment, human rights and law’. Michaela and Vanda strategically placed the flyers where they could, and also stood by the door of Room 4 to talk to passersby about the event.

Michaela and Vanda also attended the UNIDIR and EU event on ‘Narratives on the Middle East WMD-Free Zone: Historical Accounts, Drivers, and Themes’, which promoted a forthcoming publication that UNIDIR is working on that “…presents seven “narratives” or subjective accounts of the Zone. Each narrative explores the main objectives, strategies, themes, and ideas of key states toward the ME WMDFZ. Another objective of the publication and the side event is to facilitate insights and understanding of different perspectives that could assist in bridging gaps and uncovering instances of convergence, divergence, and possible misunderstandings on the Zone.” After a productive and informative morning, Alyn, Bill, Vanda and Michaela went to have lunch at the diner and recharged their batteries with some delicious food.

In the afternoon, Michaela and Vanda went back to the NPT Rev Con and interviewed Anna Maria Belevitch from Colombia University on her experience of the NPT Rev Con. Anna Maria is attending the NPT Rev Con as she has recently been to French Polynesia to conduct research on the impacts of nuclear testing on various affected populations, and is contributing to important developments in this area. To hear more about Anna Maria’s experience at the NPT, and her opinion on the importance of Nuclear Disarmament, check out our highlights on our Youth Fusion Instagram account.

In the evening, Michaela and Vanda joined Alyn and Bill to see the Broadway production Little Shop of Horrors, which was absolutely brilliant.