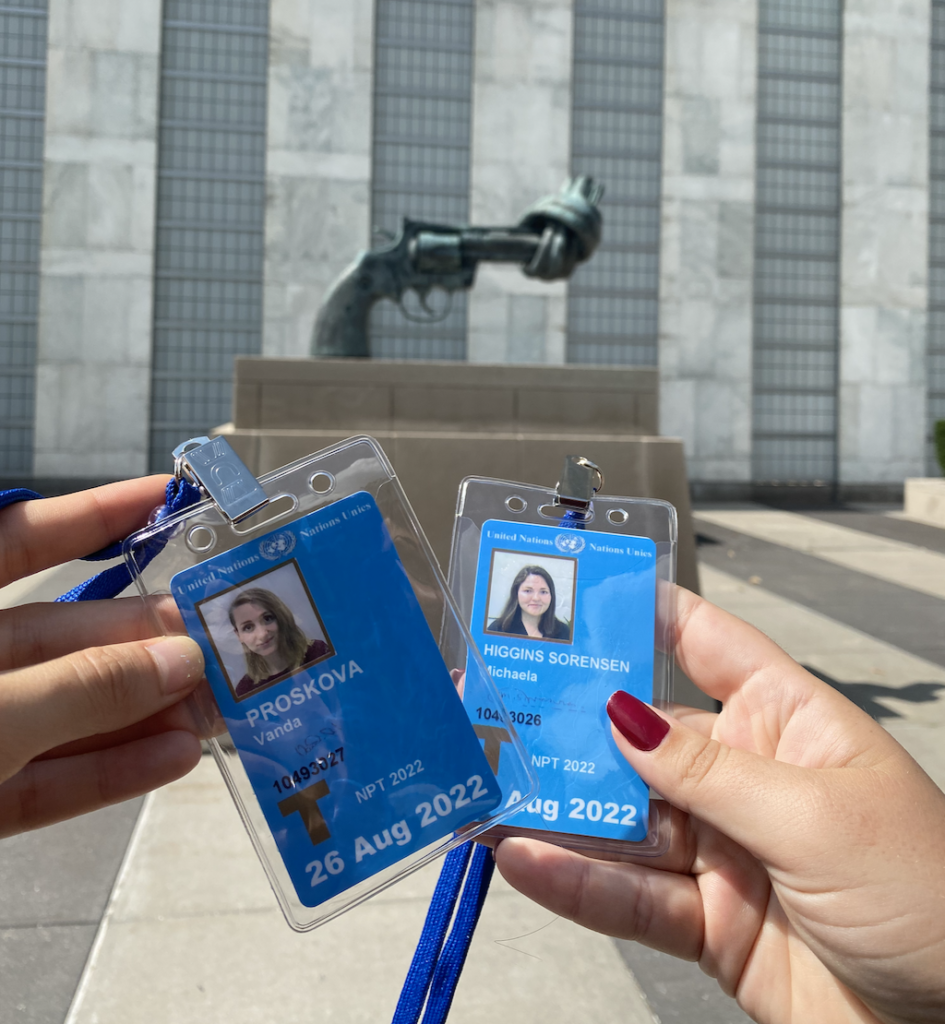 The first day of the NPT Rev Con that Vanda and Michaela attended was during the second week on the 8th of August, 2022. Michaela and Vanda got an early start to the day in New York, and headed straight to pick up their UN badges on the way to the United Nations Headquarters after having breakfast. Upon their arrival, they met with Alyn Ware from PNND to have a coffee and plan their afternoon event on ‘Legislator’s actions for nuclear risk reduction and disarmament’ in Conference Room B, where NGOs and civil society members run their side-events. This event was organised in partnership with PNND, Youth Fusion and World Future Council.

After a productive discussion, Michaela and Vanda had lunch with Scottish MP from the SNP party, Bill Kidd, where they also had a chance to interview him for our Youth Fusion Instagram account. Vanda and Michaela asked Mr. Kidd about the great need for the UK to disarm and get rid of their nuclear weapons arsenal on land and sea, wherein he highlighted that ‘nuclear disarmament is in Scotland’s DNA’. Mr. Kidd remains optimistic that nuclear disarmament, within the UK, is possible, and contributes towards this every day in his work.

After lunch, Michaela and Vanda attended IPPNW’s side-event on ‘N-5 Doctors Speak with One Voice’ chaired by Molly McGinty, a prominent nuclear disarmament activist and member of Youth4TPNW. The event showcased the important role that the healthcare sector plays in nuclear disarmament with key information underlining that fact that there is no health system in the world that is capable of dealing with a nuclear bomb detonation, as showcased during the bombings of Hiroshima and Nagasaki. The event had fantastic youth speakers, and truly highlighted that many people from the healthcare sector across the world are working to highlight the intersections between global health and nuclear disarmament. One key take away was that ‘what we cannot respond to, we must prevent’.

After IPPNW’s event, it was time for Vanda and Michaela to speak at theirs, alongside PNND’s Alyn Ware, Saber Chowdhury from IPU Bangladesh, Bill Kidd, Abolition 2000’s founding mother Jackie Cabasso, and Senator Edward Markey (who attended through a video message). The event, chaired by Vanda and Alyn covered legislator’s actions for nuclear risk reduction and disarmament from a diverse range of regions and spaces. Mr. Chowdhury spoke on the importance of cohesive interparliamentary action on nuclear disarmament, Ms. Cabasso spoke on the important work of Abolition 2000 and Mayors for Peace, and Mr. Kidd had a ‘rant’ on the UK’s violation of the NPT by proliferating their nuclear weapons stockpile, and called on Scotland’s government to lead the way for the UK’s disarmament process. Lastly, Michaela spoke on PNND’s activities within their Gender, Peace and Security Program, wherein she discussed their approach on focusing on women’s involvement and representation, the gendered impacts of nuclear weapons and testing, and a genuine gender perspective and approach within the political dynamics at play within the security space.

The discussion section was lively, and questions were raised on how to implement such actions in the parliamentary space, on how to provide justice for the victims of nuclear weapons testing, the binary approach that nuclear disarmament has when it comes to gender and the lack of data in this space, as well as how to work in coalitions under a framework of a human rights and human security approach.

After a long and productive day, Vanda, Michaela, Alyn and Mr. Kidd had a lovely dinner at an American Diner not far from the UN Headquarters.