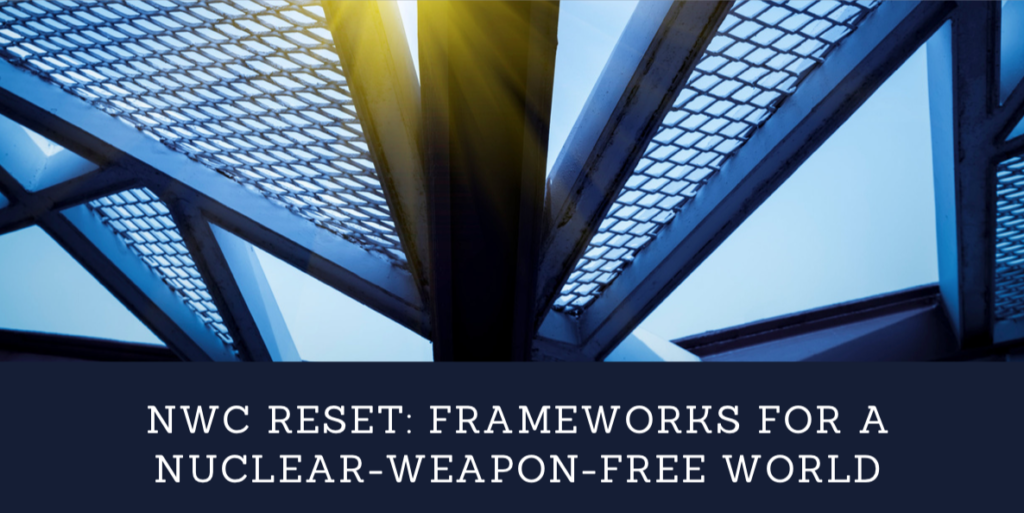 NWC Reset: Frameworks for a Nuclear-Weapon-Free-World

On April 2oth, 2022, Abolition 2000 organised a virtual event, NWC Reset: Frameworks for a Nuclear-Weapon-Free-World, inviting a distinguished panel of speakers and gathered more than 200 guests from across the world.  This virtual event was held in two sessions, each of which was adapted to different time zones, with Session 1 timed for Asia/Pacific and Session 2 later today for the Americas, Europe, Africa and the Middle East.

The event explored the legal, technical and institutional measures and frameworks to facilitate the global prohibition and elimination of nuclear weapons, which will include possibilities of a nuclear weapons convention (NWC), a framework agreement and/or protocols to the Treaty on the Prohibition of Nuclear Weapons.

Session 1, which was timed for Asia/Pacific, started with the opening speech of Ms Aigerim Seitenova, the chair of the session where she shared the background information about the civil society working paper Abolition 2000 NWC Reset: Frameworks for a Nuclear-Weapon-Free World, which has been  submitted to the 10th Review Conference of States Parties to the Nuclear Non-Proliferation Treaty, which will take place in August, 2022.

After a brief introduction, the event was opened with the screening of the short video called ‘Recovery of Damage’ by Yuzuki Osaki and Misaki Teramoto, third prize winners in the UN Office for Disarmament Affairs #Youth4Disarmament video competition, therefore highlighting the importance of engaging young leaders in the pursuit of achieving a nuclear-weapon-free world.

Next, the session was followed with the presentation from the first speaker Mr Alyn Ware, an International Representative of the Aotearoa Lawyers for Peace. As  a Co-Chair of the Abolition 2000 Working Group on the UN Disarmament Agenda and a Nuclear Weapons Convention, and  Principal Drafter of the 1997 Model Nuclear Weapons Convention (NWC) and 2007 Revised Model NWC, Mr. Ware gave an in-depth introduction of the working paper providing a comprehensive analysis of  the background of different developments throughout these years related to the proposed Nuclear Weapons C0nvention. Mr. Ware explained two main points of the need to consider the Nuclear Weapons Convention via answering the questions: a.) Why?! Elaborating on the reasons for a demand for the submission of the working paper on the NWC, taking into account the current situation related to nuclear weapons, and b.) Who?! Describing active involvement of different specialists and experts who have been working on the NWC. Mr. Ware stressed the importance of engaging the nuclear armed states through the exploration of feasible and comprehensive options for achieving a nuclear weapons free world, at the same time as working on really important initiatives to lower the role of nuclear weapons and reduce their risks, stressing the NPT Review Conference as a crucial forum considering the successful progress achieved at the 2010 NPT Review Conference where it was stated that:

“All States need to make special efforts to establish the necessary framework to achieve and maintain a world without nuclear weapons. The Conference notes the Five-Point Proposal for Nuclear Disarmament of the Secretary-General of the United Nations, which proposes inter alia the consideration of negotiations on a nuclear weapons convention or a framework of separate mutually reinforcing instruments backed by a strong system of verification.”

Regarding the question Who?!, Mr. Ware noted Abolition 2000, which as a global network for organisations and individuals established in 1995 drafted a statement at the NPT Review Conference, which included both the aspiration for the elimination of nuclear weapons in particular through a nuclear weapons convention. Over the years, the initial 1997 Model of the NWC and updated 2007 version gathered a lot of support considering the UN Secretary General’s inclusion of the NWC in his Five-Point Plan for Nuclear Disarmament which he released in 2008. It would not be achieved without rigorous advocacy work and activism of experts and organisations, and it is important to note that the development of the concept of the NWC, and other accomplishments throughout the years, has been brought forward a lot following the decision from the International Court of Justice in 1996 that the threat or use of nuclear weapons is generally illegal.

In his presentation, Mr. Ware  gave a more detailed analysis of the proposals that the working paper Abolition 2000 NWC Reset: Frameworks for a Nuclear-Weapon-Free World entails by enabling progress through flexible approaches. In addition to the verification systems initially reflected in the Model NWC, the working paper introduces the need for: delivery systems which are solely or primarily developed for delivering nuclear weapons, better compliance mechanisms and national implementation measures that would need to be adopted.

One of the ideas shared by Mr. Ware addressed the option of negotiations protocols to the TPNW or separate standalone agreements amongst the nuclear armed and allied states as one of the possible solutions in order to encourage these states to join the ban treaty. In conclusion, Mr. Ware proposed a phased approach to the mentioned options which can lead to the elimination of nuclear weapons by 2045, the 75th anniversary of the NPT, the 100th anniversary of the United Nations, if it successfully agreed by the states and implemented with respect to crucial obligations and commitments to witness the world free from nuclear weapons.

The second speaker was Dr. Manpreet Sethi, the Head of the Nuclear Security Project at the Centre for Air Power Studies, New Delhi and a member of the Rajiv Gandhi Action Plan Group for a Nuclear Weapon Free and Non-violent World Order and of the Asia-Pacific Leadership Network.

Dr. Sethi stressed the importance of the 1997 Model NWC and highlighted its progressive, comprehensive approach which sought the involvement of all nuclear armed and allied states, encouraged reduction in numbers along with reductions in reliance on nuclear weapons., building through effective verification, compliance, conflict resolution mechanisms. Dr. Sethi underlined the role of the Rajiv Gandhi Action Plan, which was presented at the UN GA Third Special Session on Disarmament in 1988. Dr. Sethi noted that the mentioned plan  was suggesting a progressive stage by stage approach addressing not only nuclear weapons, but also security in a more comprehensive sense than stressing the importance of other WMDs, including new technologies which at that period of time were not as developed as today. As well as Model NWC, it suggested a comprehensive verification system. Dr. Sethi concluded her presentation with four concerns centered on whether the NPT would be the right forum for negotiations on the NWC, what other possible ways would be more feasible to bring forward negotiation protocols to the TPNW, considering the lack of interest on the treaty by nuclear armed states, whether small working groups on each section of the NWC would be more effective, and lastly, could  the NWC become the bridge between the nuclear weapon states and the non-nuclear weapon states.

The third speaker,  Dr. Tong Zhao, a Senior Fellow at the Carnegie Endowment for International Peace, a Board Member of the Asia-Pacific Leadership Network for Nuclear Non-Proliferation and Disarmament, and a Member of the International Panel on Fissile Materials. In his presentation, Dr. Zhao emphasised the importance of reflecting on some of the fundamentals about nuclear weapons for both countries and experts since the traditional belief lies in the assertion that nuclear deterrence helps maintain peace. However, maintaining mutual nuclear deterrence means that countries monitor the development of a wide range of nuclear and non-nuclear capabilities by their enemies, which has a negative impact on international security relationships. According to Dr. Zhao, this maintenance of peace through nuclear weapons, which is inter alia negative peace, gives a false sense of security which might lead to a larger political disagreements.

Dr. Zhao also provided some suggestions in light of the upcoming NPT Review Conference such as first of all, the need of states to be fully transparent about their nuclear programmes, developments and capabilities. Second of all, there has to be a commitment of nuclear armed states to not promote the importance of nuclear weapons to the public, and instead  Dr. Zhao proposed states to devote funding to development of educational programmes for state officials on disarmament, including the legal obligations of those states.  The last point that Dr. Zhao highlighted is that the states should facilitate  forums for public debates and opinion on the nuclear weapons issues and risks and nuclear disarmament by creating conditions for  civil society actors, research institutes, University students, organisations to organise meetings, conferences and discussions.

In her presentation, Ms. Bertuzzi stressed how much money is being spent on nuclear arsenals and highlighted that the public awareness about the threat of nuclear weapons now is lower than it was in the 1970s and 1980s where there were big anti-nuclear movements. In this regard, Ms. Bertuzzi, recognizing the role of the TPNW in pursuing a world free from nuclear weapons, emphasises the importance of raising awareness about the threat of nuclear weapons among young people since the threats of climate change and nuclear weapons cannot be ignored. Ms. Bertuzzi asserted that the money should be spent on disarmament connecting it to other important issues like the environment and therefore emphasising the intersectional approach. Ms. Bertuzzi also highlighted the importance of cooperation among organisations to create more engagement and facilitate  new perspectives as a tool for a more flexible approach in achieving a nuclear weapons free world.

In conclusion, Ms. Bertuzzi underlined the vital role of communications where there will be a change of narrative and the message of ‘nuclear weapons make the world safer’ would not be on the table and, moreover, the budget would be divested from nuclear weapons to the environment and solutions related to climate change.

Insightful presentations of the distinguished speakers were followed by the Q&A session where participants of the session asked different range of questions, for example if the proposition to have Article 21 to the TPNW called ‘Friend of TPNW’ for the umbrella states to declare support of the TPNW is something that might be effective and if there is possibility to ensure nuclear weapons free zones as security mechanism considering the importance of this concept. The Q&A session concluded Session 1 of the discussion of the NWC Reset: Frameworks for a Nuclear-Weapon-Free-World, which brought an astonishing panel of speakers and participants from different countries to explore different frameworks and mechanisms towards achieving one goal: a world free from nuclear weapons.

The event was live streamed on the Abolition 2000 official Facebook page and recording of the Session 1 of the event  is available here.