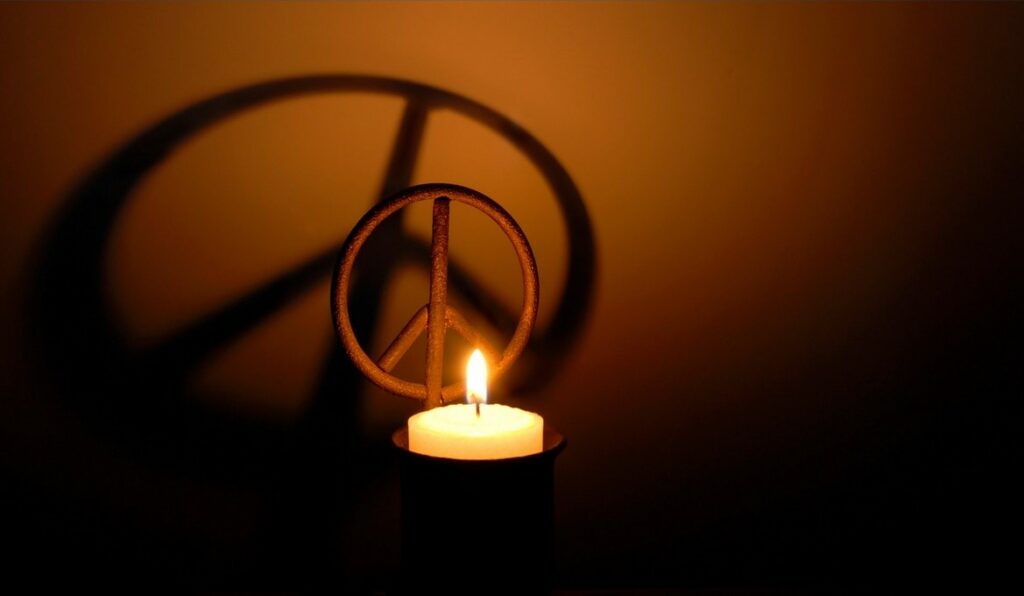 An intergenerational event on youth engagement to implement the right to a nuclear-weapons-free future took place on February 28th. The event was in commemoration of several important dates; Nuclear Remembrance Day (March 1), serving as the anniversary of the Bravo nuclear test in the Marshall Islands, which continues to have an impact on the public health of Marshallese people today, and World Futures Day (March 1), which was established to consider the threats and opportunities of the future for humanity, and the final day of the WeTheWorld 40 Days of Peace, inspired by Martin Luther King Jr’s ‘I have a Dream’ speech.

The event was held virtually and involved speakers from around the world, focusing primarily on the kinship between human rights and nuclear weapons. The event also emphasized the engagement of different generations, experienced experts and young leaders, involved in the human rights dimensions and aspects of achieving a nuclear-weapons-free world.

The event gathered over 200 online guests, the publicly available and full recording of which you can see by clicking here.

Michaela Sørensen, a Program Officer at Youth Fusion and the Public Relations Officer at UNANET, chaired this event and opened it with a background history of the nuclear testing carried out by the United States in the Marshall Islands on the 1st of March, 1945, which led to the establishment of Nuclear Remembrance Day. Ms. Sørensen emphasized the importance of nuclear disarmament amidst the crisis, specifically related to nuclear war risks which still exist, thus highlighting the current situation on Russia’s invasion in Ukraine (see statement of the Youth Fusion on the current situation in Ukraine).

After the introduction by Ms. Sørensen, the event was followed with a screening of a powerful video poem: ‘Anointed’ by Kathy Jetn̄il-Kijiner, an accomplished poet and activist from Marshall Islands. This inspiring and moving poem is dedicated to the Marshall Islands and tells a powerful story about nuclear weapons testing, thus highlighting racism and the abuse of power related to the nuclear weapons field. Ms. Jetn̄il-Kijiner eloquently unveils, through her compelling poetry, the devastating experience of the Marshall Islands, her homeland, and its people because of the nuclear weapons tests conducted by the United States. Ms. Jetn̄il-Kijiner has been awarded with several achievements for ‘Anointed’ such as: Opening poetry performer for UN Climate Summit 2014, named as one of 13 Climate Warriors by Vogue in 2015, and the Impact Hero of the Year by Earth Company in 2016.

Speakers of the event involved people from different generations and contributed to the main topic on nuclear weapons and human rights.

The first speaker, Aigerim Seitenova, a Program Assistant of  Youth Fusion shared her personal story that led her to choose the human rights field. Ms. Seitenova was born in Semipalatinsk, in East Kazakhstan, near the territory of which the Soviet Union conducted around 500 nuclear weapons tests in the course of 40 years. In addition to sharing her personal experience of being from Semipalatinsk, Ms. Seitenova made the connection between human rights and nuclear weapons, thus emphasizing what kind of human rights would be violated in case of a threat, use or test of nuclear weapons. Highlighting core human rights treaties, and fundamental importance of the right to life, and General Comment 36 on article 6 of the International Covenant on Civil and Political Rights (ICCPR) from 2018, Ms. Seitenova added emphasis to other intersecting areas of human rights, such as: right to health, healthy environment, right to be free from torture and cruelty, inhumane and degrading treatment, and the right to adequate remedies.

The second speaker was Cecili Thompson Williams from United States, the Executive Director of Beyond the Bomb, a people-powered campaign working to free the planet from nuclear violence. Ms. Thompson Williams shared a very informative presentation on the priorities of the work that Beyond the Bomb has been doing in the US towards achieving global zero (no nukes). These priorities include:1) justice for frontline communities, 2) no-first-use and 3) stopping missile modernizing. Two of these priorities primarily linked to human rights, therefore Ms. Thompson Williams based her presentation on these two priorities. The first priority expands to the  provision of support to frontline communities to achieve justice, precisely through active work in relation to the Radiation Exposure Compensation Act. The second policy priority focuses on the work related to changing the current policy on the power and authority of the US Presidents in terms of nuclear strikes. Beyond the Bomb is working towards achieving global zero by focusing on changing the policy in the United States to take a bold stance of no-first-use. Ms. Thompson Williams finalized her presentation on the situation in Ukraine and the illegality of the Russian Government’s actions. As Ms. Thompson Williams fairly noted, the Russian Government’s actions constitute human rights violations and heightens risk of nuclear conflict, consequently an implementation of the no-first-use policy plays an important part, in order to minimize these risks.

Next,  Jana Larsen, from WEtheWorld highlighted that the present event was held in the framework of MLK Day of Service and 40 Days of Peace and said that she shares Martin Luther King Jr’s dream and believes that we can achieve a goal of getting rid of nuclear weapons, especially because we live in very uncertain times. Ms. Larsen was the person responsible for the initiative of the event, and was an instrumental part in its organisation.

The third speaker was Dr Daniel Rietiker, an International Law Lecturer at Lausanne University, and the President of the Association of Swiss Lawyers for Nuclear Disarmament. Dr Rietiker started his speech stressing the relevance of discussing human rights and nuclear weapons together due to the recent situation in Ukraine. Dr Rietiker shared information about his book, Humanization of Arms Control: Paving the Way for a World free of Nuclear Weapons, and emphasized the positive role of Kazakhstan in the nuclear disarmament field. Dr Daniel Rietiker’s speech was focused on the more detailed legal analysis of the significance of human rights in the field of nuclear weapons, starting from the history of treaties and special provisions in international legal documents. Dr Daniel Rietiker explained why not only humanitarian law should be applied, but also human rights law since it applies in all circumstances at all times. Next, Dr Daniel Rietiker mentioned the usefulness of the procedural part of human rights mechanisms, namely the use of treaty bodies and support in obtaining remedies for human rights victims. Dr Daniel Rietiker addressed the right to life and its relevance to nuclear weapons, paying special attention to General Comment 36 in article 6 of the International Covenant on Civil and Political Rights. Dr Daniel Rietiker gave a detailed legal analysis of the General Comment 36 and provided highly valuable information on the obligations of states in relation to the right to life, and nuclear weapons use or threat of use.

The next speaker was Kehkashan Basu, the Founder and President of the Green Hope Foundation and the Co-Chair of World Future Council. Ms. Basu is also a UN Human Rights Champion. In her speech, Ms. Basu shared the example of nuclear weapons testing in Pokhran, India in 1974, focusing on the devastating health consequences from radiation exposure in Khetolai, the closest village to the test site. Ms. Basu emphasized the ignorance, lack of data and secrecy related to suffering from nuclear weapons testing throughout different parts of the world. In addition to that, Ms. Basu also spoke about the mines in Bihar, India and the horrific living situation of indigenous peoples from that region. Finally, while Ms. Basu condemned the Russian Government’s invasion in Ukraine, she also expressed her concern about the lack of the media coverage on the wars in the Global South, which reiterates this world’s Eurocentrism, racism and colonialism. Ms. Basu finalized her speech with tools to achieve change such as education, raising awareness, just policies, and emphasized the crucial significance of full nuclear disarmament of nuclear weapons states.

Alyn Ware, a PNND Global Coordinator and International Representative at Aotearoa Lawyers for Peace, was the last speaker with an educational presentation on human rights and nuclear weapons, continuing the core emphasis on the right to life.  Mr. Ware noted that today, the approach is changing from state-centered to human-centered security. Acknowledging existing challenges to raise the human rights aspect in the Security Council or UN Disarmament Committee, Mr. Ware underlines the effectiveness of human rights mechanisms. Mr. Ware explained the role of General Comment 36 as well, and noted that using various human rights bodies, such as the International Covenant on Civil and Political Rights, the Convention on the Elimination of Discrimination against Women, or the Convention on the Right of the Child cover most of the countries, including nuclear weapons states and allied states, which then have the duty to give a response. According to Mr.Ware, utilizing human rights mechanisms will allow to strengthen nuclear disarmament and create a stronger kinship with the human rights message. Mr. Ware shared the experience on how organisations have been submitting reports and using human rights bodies since the adoption of General Comment 36 in 2018. Mr. Ware notes that General Comment 36 also stresses another threat to the right to life- climate change, which is connected to nuclear weapons as well. Mr. Ware shared future plans on how human rights mechanisms will be used effectively to address nuclear weapons and human rights. In the end, Mr. Ware noted we need to call for the abolition of war per se because overmilitarized nations use nuclear weapons in their security policies as a threatening tool, and therefore using human rights bodies might be more effective as another platform to accomplish nuclear disarmament.

The Q&A session from the online audience followed  speakers’ presentations and addressed a variety of questions regarding: the Partial Test Ban Treaty in 1963, cooperation of groups on the nuclear testing in India and accident in Bhopal, and countries unwillingness to follow international human rights standards in the regard to nuclear weapons.

After Q&A, Ms. Sørensen, the chair of the event, conducted an interactive part of the event where participants had to answer a question with three words.

‘What does nuclear remembrance day mean to you?’

Below, the screenshot with answers from participants: 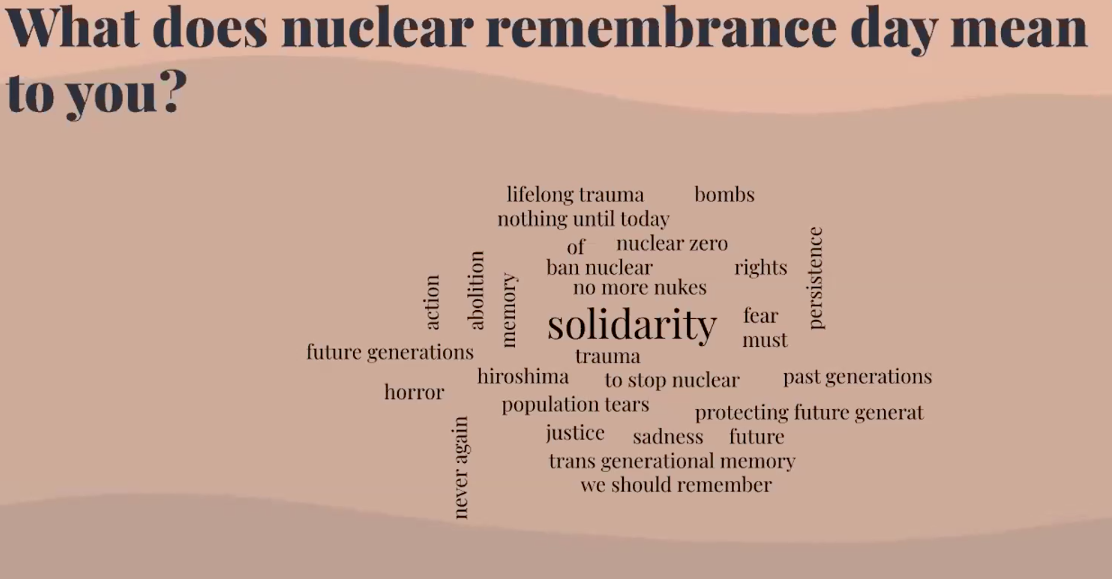 In his closing remarks, Mr. Ware, highlighted the intergenerational cooperation in preparation of the event, and invited participants to subscribe to Youth Fusion’s Newsletter. Mr. Ware eloquently noted that we have got a lot of power in terms of cooperation in this tough time, and stressed the importance and power of listening to others and being inclusive.

“No one nationality, no one religion, no one race has a monopoly on either the truth or false world. We need to be humble, listen to others, and to move forward in a sense of respect”

A risk of a nuclear war is heightened, as mentioned earlier, amidst conflicts that shook the world recently. The current situation in regard to Russia and Ukraine is another reminder of the urgent need and importance of nuclear disarmament. Viewing nuclear weapons from a human rights perspective helps to enhance a human-centered approach and put human lives and their security at the very top and center of the global, regional or local agendas.