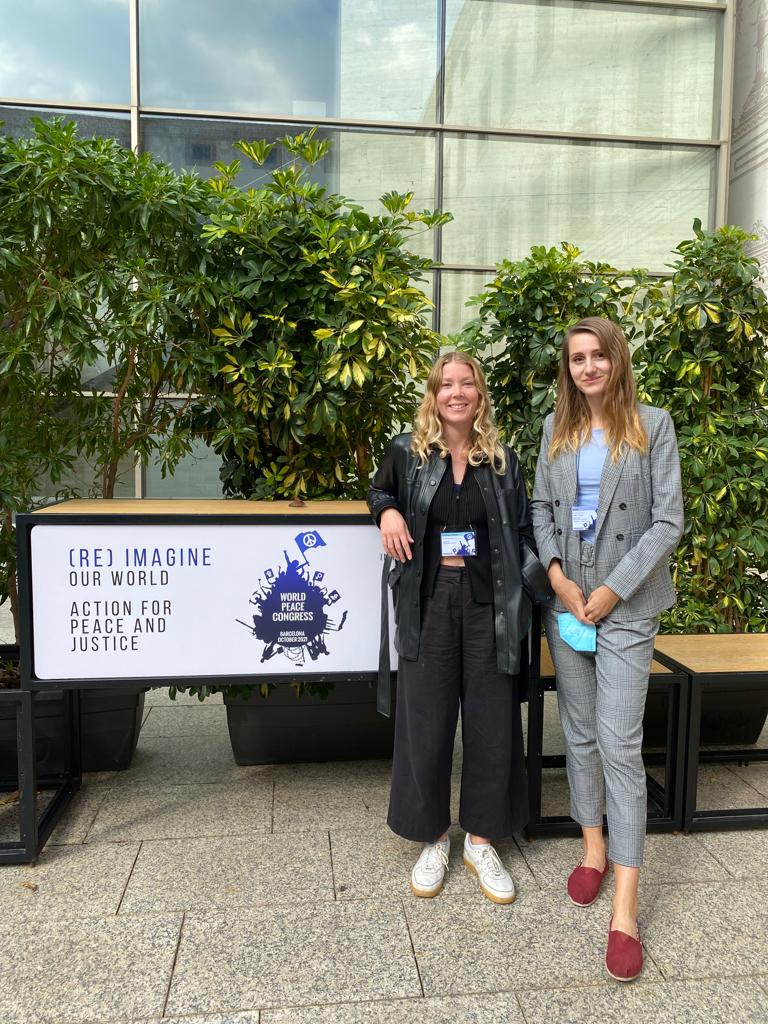 With over 900 in-person and around 1,700 online participants, the IPB World Peace Congress 2021 can easily be called a success. Needless to say, Youth Fusion was excited to take an active role in the program.

Yet while the participant numbers certainly look good, it is not the quantity but rather the quality of the attendees, workshop facilitators and speakers that we would like to highlight in this short blog article. In the space of a single weekend, the organizers – with the IPB Youth Network leading the way – managed to squeeze in a truly diverse, insightful and inclusive program for both in-person and online audiences, with simultaneous translation into English, Spanish and Catalan.

Youth Fusion was happy to see equal attention paid to the many disarmament and non-proliferation initiatives and pathways available – incremental and radical, from support for the Nuclear Ban Treaty to appreciation of Nuclear-Weapon-Free-Zones, divestment and common security efforts.

The full Congress program is available here, and you can enjoy videos of the plenary sessions here – including Co-Convenor Vanda Proskova’s plenary speech on Disarmament for Development!

To learn more about the Congress content, including Youth Fusion’s activities – continue reading.

Tracking Corruption in the Arms Trade

With our interest in the full spectrum of disarmament needs and pathways, not only nuclear, Youth Fusion attended a workshop on how to track corruption in the global trade in conventional arms. The lively and interactive session was coordinated by Corruption Tracker, run by the brilliant Ruth Rohde, Brittany Arneson, Julia af dem Brinke and Andrew Feinstein (co-founder of Shadow World Investigations). Starting off with an insightful presentation on the terrifying extent of corruption in arms deals globally, we then split into groups to answer a variety of key questions, including: What are promising approaches against corruption? How can we evaluate the impact of corruption in the arms trade on national economies and democratic institutions? What could coalition building between anti-corruption, anti-arms trade and other social justice issues look like? For a hint of some of the answers, see below…

This fantastic hour-long workshop was led by Tony Robinson, Author at Pressenza and Director of the Middle East Treaty Organization together with Juana Perez, also from Pressenza. The workshop, done in the hybrid format, made all participants question what “violence” and “non-violence” mean to us, and presented interesting insights to journalism that promotes peace and nonviolence. The workshop leaders talked about developing a style of journalism that encourages peaceful conflict resolutions and dialogues, reminding us that “There is no such thing as objective journalism!“ The participants also debated about misinformation, and possible ways of tackling them.

Defund the Military · Defend People and the Planet

It’s a sunny Saturday afternoon in Barcelona’s city centre – and who would not want to discuss the absurdities of today’s global military spending, as it continues uninhibited despite the world’s aching need for investments in sustainable futures? This workshop was hosted by Jordi Calvo Rufanges & Quique Sánchez in cooperation with the Global Campaign on Military Spending (GCOMS), in the spirit of their annual worldwide action Global Days of Action on Military Spending (GDAMS) connecting the need for redistribution of (human, natural, financial) resources from militarism to climate action, social justice and human security and drawing attention to how current levels of military spending not only fail to provide true security, but stand in the way of just and comprehensive solutions to the most pressing issues facing humanity and the planet. The session was filled with brilliant speakers discussing their military expenditure research focussing on specific regions: 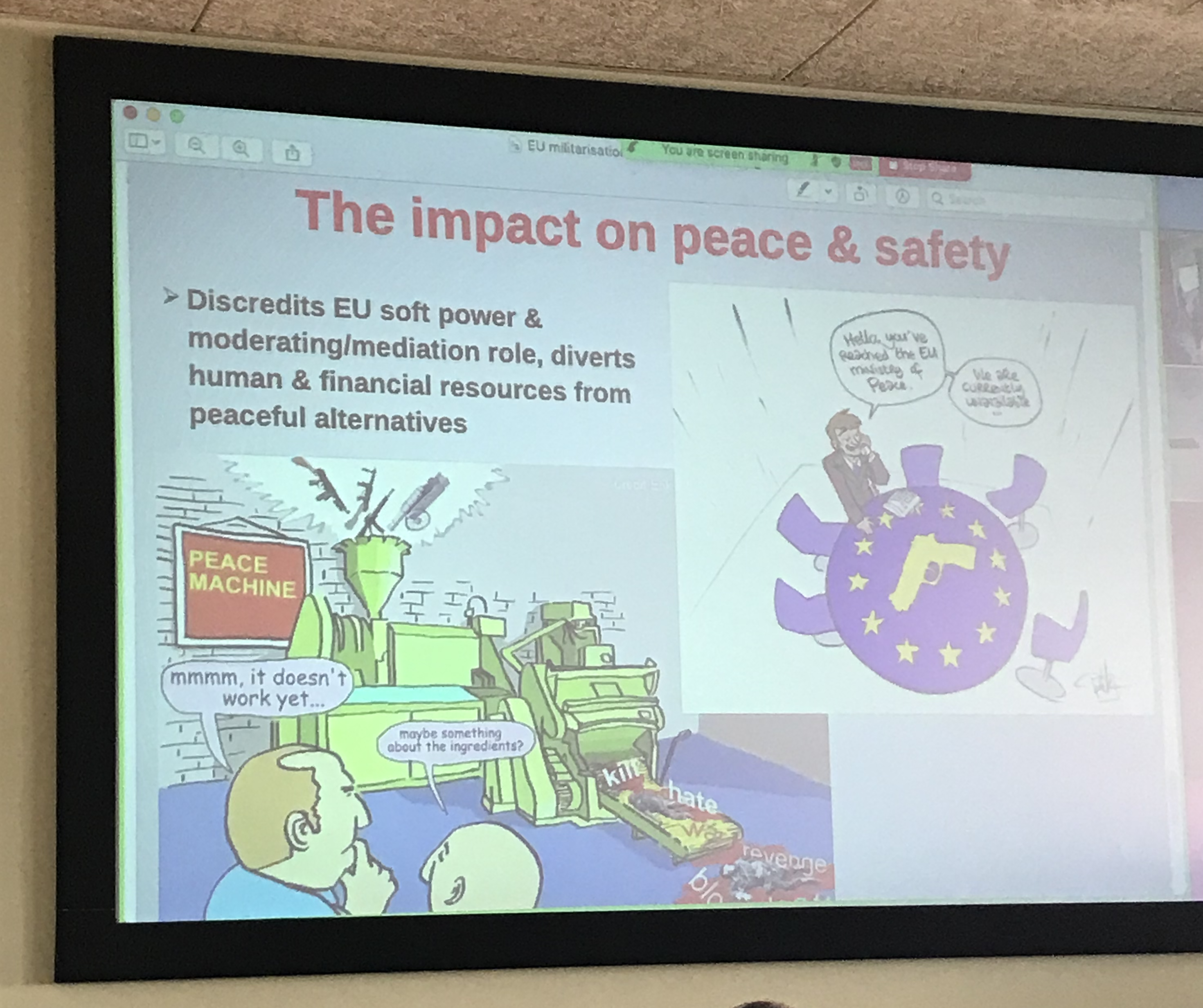 Don’t underestimate the power of satire!

Further, Vanda considered the repercussions of a regional nuclear conflict, coming to the conclusion that such an event would have an immediate while lasting effect on millions of people, as well as the life on land and underwater. Changing temperatures, shortened yearly crop growing time, and destroyed food chains are just some of the examples of such consequences. Simultaneously, all of these would harm our progress of achieving the SDGs.

Finally, Vanda devoted the concluding part of her speech to nuclear divestment, as a tool that all individuals can use (or encourage their governments, cities or various institutions to implement). She suggested the Move the Nuclear Weapons Money as a good resource to all interested in this topic and action, as well as Don’t Bank on the Bomb‘s comprehensive research on financial institutions’ nuclear investment and divestment.

Vanda concluded by reminding the listeners that the links between nuclear disarmament and sustainable development are clear – “we need one to complete the other.”

Stay informed on Vanda’s work and follow her on Twitter! You can also listen to the full speech here.

The workshop further included a brief Q&A session with participants from both the in-person and online settings.

As the participants have learned, NWFZs are important regional practical measures of non-nuclear-weapon states in promoting the goals of nuclear non-proliferation and strengthening confidence among states. While there are discussions for establishing NWFZ in the Middle East or Northeast Asia, there are still many obstacles and gaps the international community needs to bridge.

Wrapping up Day 2, Youth Fusion exhibited the 3D Nuclear Missile first commissioned by World Future Council. The missile was displayed in between the two conference venues, allowing all interested congress participants and passers-by to interact with us and the art piece. As the 3D Missile was first revealed at the First IPB World Congress in Berlin in 2016, many participants were happy to see it again and some even considered it a “tradition.”

Aside from the many conference visitors the 3D Nuke Missile attracted, we were pleasantly surprised by the volume of other visitors, and their interest in the art piece and willingness to learn more about the nuclear threat. This new way of looking at the issue stimulated many interesting conversations about nuclear weapons in Europe as well as the lack of awareness around them.

Thank you to everyone who stopped by!

To conclude, Youth Fusion returned home from Barcelona in a spirit of hope, with renewed energy, a whole load of knowledge and an abundance of friendships, new and old. We look forward to the next Congress with great anticipation, (loosely) planned five years from now in Asia-Pacific. In the meantime, we promise to draw on the wisdom and care shared in Barcelona as we continue our work for a just and sustainable future!