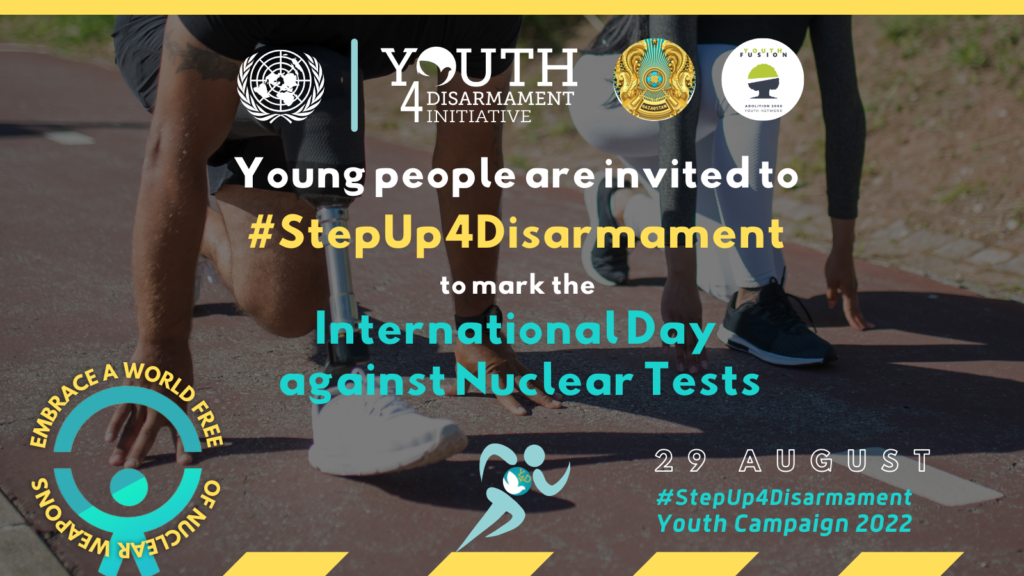 Following the success of last year’s initiative, #Youth4Disarmament, Youth Fusion and the Permanent Mission of the Republic of Kazakhstan to the United Nations are calling on young people to #StepUp4Disarmament by either completing a distance of 8.29 kilometres or tracking 10.9k steps, an approximate equivalent, to raise awareness of the International Day against Nuclear Tests, on 29 August 2022, and its cause to ban nuclear tests.

The campaign aims to raise awareness of the devastating health consequences of nuclear testing through an emphasis on physical activity, recognizing that sport plays a crucial role for many young people across the world.

Opportunity to attend in-person briefing and tour of UNHQ:

As part of this year’s #StepUp4Disarmament Youth Campaign, 21 young people will be selected to attend an in-person tour of the United Nations Headquarters and attend a briefing from experts on the impact of nuclear testing.

Participants will be selected from responses received to the following question:

“What is the role of young people in raising awareness of the International Day Against Nuclear Tests and its cause?”

The submissions will be judged by UNODA staff based on the following criteria: Relevance, Clarity, Innovation, Originality and Passion. Submissions must be under 250 words and submitted before Thursday, 18 August 2022.

Interested participants must be based, or located, in New York on 29 August to take part. Please note the #Youth4Disarmament initiative will not be able to provide travel or accommodation.

More information about the action:

The devastating consequences of nuclear testing have significantly disrupted the lives of survivors. Nearly 2,000 nuclear tests have taken place since testing began on 16 July 1945. Affected communities around the world continue to endure the biological, ecological and cultural consequences. The #StepUp4Disarmament Youth Campaign aims to raise awareness of the devastating health consequences of nuclear testing through the emphasis on physical activity, also promoting Sustainable Development Goal 3 on ensuring good health and well-being for all at all ages.

As a result, the #StepUp4Disarmament campaign invites young people to utilise their sporting passion, interest and ability to raise awareness of the International Day Against Nuclear Tests, facilitating the participation of youth in disarmament, non-proliferation and arms control through an innovative approach.

To ensure as many people as possible can take part, the #StepUp4Disarmament Campaign provides two options for young people, and others, to participate:

Sport has the power to change the world, forming a shared interest and universal language that unites people from around the world. By crossing boundaries and inspiring hope across nations, sport acts as a powerful way to engage, educate and empower people through the pursuit of a collective goal. In this context, the #Youth4Disarmament initiative calls on young people, supported and joined by others, from around the world to #StepUp4Disarmament, using their talent and passion for sport to raise awareness of the International Day Against Nuclear Tests on 29 August 2021 and its cause.

Youth of all nationalities, aged between 18 to 29, are invited to take part in the #StepUp4Disarmament Campaign, and can be joined and supported by family, friends and others from all ages! The campaign invites intergenerational participation, inspired by the ability for sport to promote fairness, teambuilding, equality and inclusion. Physical activities, alike running and walking, offer something to everyone, including younger people, older people, all genders, persons with disabilities, beginners, and experienced sportspersons.

The #StepUp4Disarmament Campaign will be launched on 16 July on the day of the first nuclear weapons test and the campaign will take place on the International Day Against Nuclear Tests on 29 August 2021 (8/29).

Participants may consider using a free app on their smart phones or watch devices to track their progress, as well as other activity trackers. Individuals will receive a certificate recognizing their completion of the #StepUp4Disarmament Campaign and will be featured on the #Youth4Disarmament Instagram by using the hashtags: #StepUp4Disarmament, #StepUp2StopNuclearTests, #ISteppedUp.

Check out these materials to help you get prepared for this year’s #StepUp4Disarmament Youth Campaign on the International Day Against Nuclear Tests on 29 August 2022.

Youth Fusion put together are some cool phone apps that can help you track your progress:

Click on the image to see how Youth Fusion Core Team Members Michaela and Vanda participated in the #StepUp4Disarmament challenge last year!

To not miss any updates on this year’s iteration of the action, make sure to follow #Youth4Disarmament’s Instagram page!

With any questions, do not hesitate to get in touch.

See you out there!