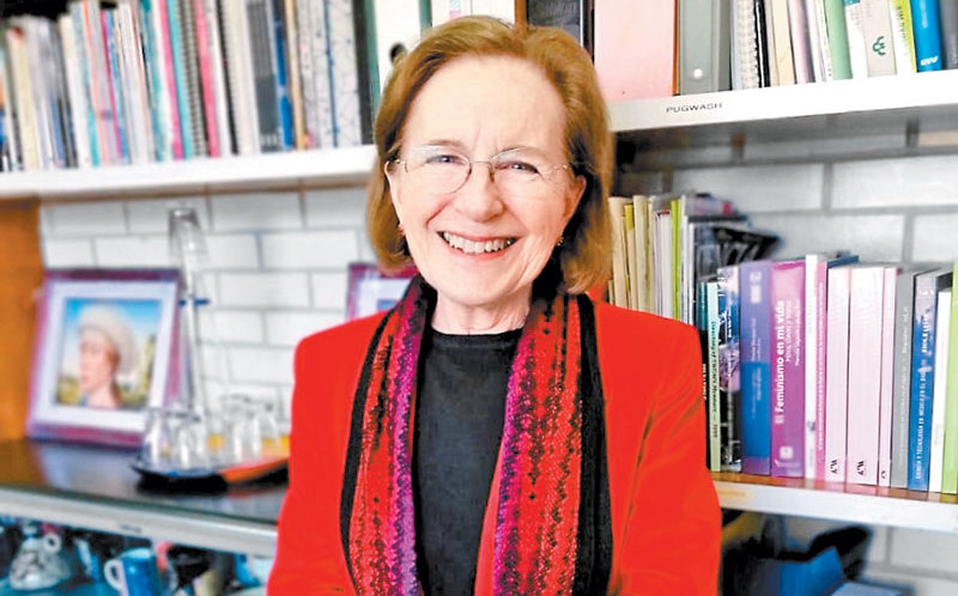 This article goes over the interview of Ana María Cetto, conducted by Youth Fusion co-convenor, Michaela Sørensen. The interview was carried out in the context of the Youth Fusion Elders project, which highlights the importance of intergenerational dialogue, and of youth learning from the experience of those who have been long-time and effective leaders in the peace and disarmament fields.

Ana María Cetto, who is from Mexico, has had a phenomenal career with a background that lies in Quantum Mechanics, Stochastic Electrodynamics and Biological Physics. Among many of her achievements, she has been the Technical Cooperation Leader and Deputy Director General of the International Atomic Energy Agency (IAEA) in Vienna, Austria, which won the Nobel Prize in 2005;  the director of the Faculty of Sciences at the National Autonomous University of Mexico, UNAM; a Council member of the Pugwash Conferences when they received the Nobel Peace Prize in 1995; a member of the World Future Council; and was Mexico’s Woman of the Year in 2003, as a member of the Third World Academy of Science, among other institutions.

Alongside her outstanding achievements, Cetto has also written numerous academic articles and several books, has promoted scientific information programs in Latin America, as well as programs for the promotion and participation of women in science. During the interview, Cetto spoke to Youth Fusion about her highly dynamic career, and the role of women and youth in the field of nuclear disarmament.

A Natural Curiosity and a Critical Spirit

When asked about what led Cetto into the field of physics, she stated that as a child, “I had a fortunate and fruitful combination of curiosity and critical spirit.” Physics wasn’t Cetto’s sole interest within the scientific field as she also had a curiosity towards chemistry and biology, but she maintained that physics was her primary choice, and that it was a good choice because it has given her a way of living. Ms. Cetto explained that when she finally decided to study physics, it was something very natural and attributed this to her lifelong curiosity that was primarily nurtured by her parents and, to some extent, in school. With a gratified smile on her face, Cetto proclaimed that, “physics is in my blood, as we say in Spanish”.

“Physics is in my blood, as we say in Spanish.”

Throughout her career, Cetto managed to couple her academic interests with her activism, and stated that it was all about “working hard, because you have to work on both sides, and you have to be serious and professional about them.You cannot take them superficially, you have to work hard, and with conviction”. Ms. Cetto explained that after her undergraduate studies, she ascertained two more degrees: a masters from Harvard University, and then a PhD from her own university, UNAM, wherein she became a serious researcher in her field. Over the span of her rigorous academic engagements, Cetto made sure not to abandon the other side, referring to her activism.

Being a Woman in the STEM Field

In light of being a woman in the male dominated STEM (science, technology, engineering and math) field, Cetto shared some sound advice: “you have to learn to gently put your foot down”. Cetto reasoned that this method is more effective than those that involve confrontation and fighting, and will result in men respecting you more, as a woman. Cetto claimed that male domination is something that has pervaded not only the STEM field, but whole societies. In order to counteract this pattern, Cetto illuminated that “it becomes clear that negotiating is not about making concessions, it’s about understanding the others”. Cetto is a big advocate for putting yourself in others’ shoes, and reasons that if you want people to respect you, then then you should speak out for them to listen, and that in turn, you must also listen to them.

“You have to learn to gently put your foot down.”

Cetto emphasized that “it is important that we listen to each other”. Moreover, she also reflected that in her experience as a woman in the STEM field within Latin America, “as long as you do not represent a threat to them, to the machismos I mean, if you do not compete for power or for prestige, if they don’t feel threatened, as long as it’s like that it’s ok”. In saying that, Cetto also mentioned that she thinks it’s important to stand up for what you believe in on certain things and to not compromise on your principles, thus striking a balance between not assuming a conflictual, threatening approach but also retaining your values and beliefs.

Cetto is still very much involved in the scientific information programs, based in Latin America, that promote Open Access to scientific information, going back 25 years. Cetto explained that there are a handful of very big commercial enterprises based in the North, namely Europe and in the United states, that have control over the international scientific publishing arena. This privatized way of dealing with information represents a highly profitable business for them, with Cetto stating that these companies make over a 30% net profit a year. Furthermore, academics have to pay thousands upon thousands of dollars to have their academic literature peer reviewed, accepted and published  in journals that are controlled and owned by one big commercial enterprise.

Therefore, this system is a highly profitable business for the publishing corporations, but a big financial burden for academic institutions, not only in developing countries, but around the globe. Cetto explained that “this has an effect of overshadowing valuable contributions to science from our countries, specifically from developing countries, because our journals are underrepresented in big commercial information services”. Cetto stated that in Latin America, “we have our own way, perhaps, of doing science in the world, but we also contribute to international science from our perspective and from our point of view”. Cetto believes that this adds value to the scientific field and should not be disregarded by the standards of the north.

Cetto asserted that “if we do not give visibility to these contributions, if we don’t value them and promote them, nobody will do it for us. So, this is why I took the initiative to create this information system”. Cetto was also happy to mention that these programs have had an incredible impact as there are now other information systems people can use from many journals online, produced in Latin America and in other parts of the world. The promotion of academic literature from around the world is still an ongoing effort. Cetto further specified that “journal publishing, for us, is not a business, it’s part of the knowledge production and dissemination process”.

“In the STEM field, I would say go ahead girls, you won’t regret it. It is a never-ending adventure, it’s endless.”

In regard to Cetto’s effort to further promote women within the STEM field, she proclaimed that, “for me, cultural diversity, linguistic diversity, knowledge diversity, knowledge source diversity, and even gender diversity, in all areas of human activity, are as important as biological diversity. So, I’m pro diversity in general. I think that all these aspects of diversity are essential for human survival, the survival of humankind”. In the interview, Cetto encouraged young women to choose scientific studies and said, “in the STEM field, I would say go ahead girls, you won’t regret it. It is a never-ending adventure, it’s endless”. Cetto explained that when you explore the STEM field, you have a better idea of how nature is, how it has evolved, and how it works, which makes you cultivate your critical spirit and nurture it. Moreover, Cetto explained that science offers countless opportunities to learn new things, to create and invent, and it gives you a degree of freedom while also meeting the most interesting people.

The full conversation between is available on the Youth Fusion Podcast page, to listen through a platform of your choice. Make sure to share and follow Youth Fusion on social media for more content like this and to be informed whenever inspiring conversations are released!