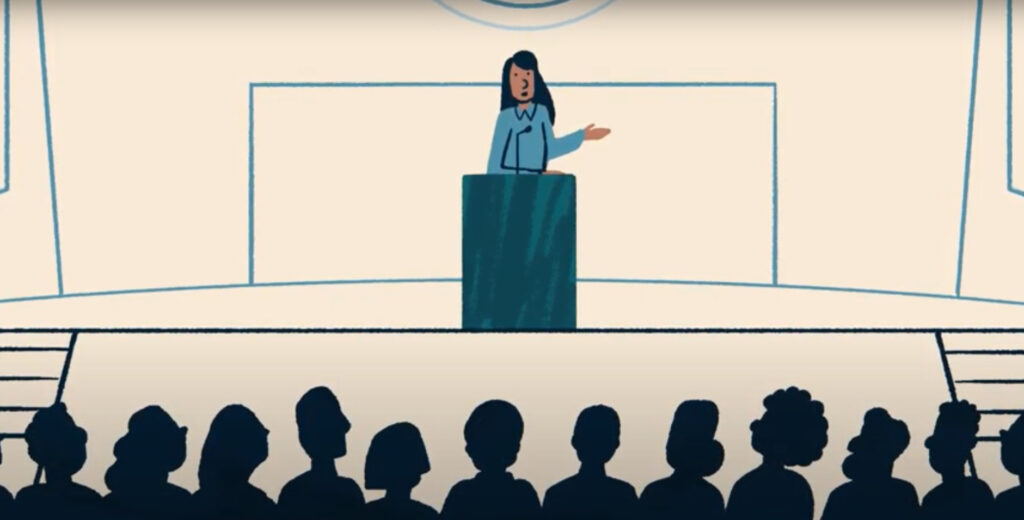 Intergenerational Forum on Peace, the Climate, Nuclear Disarmament and the Pandemic

Organized by: Youth Fusion, Basel Peace Office and the Office of Cantonal and Urban Development, Department of Presidential Affairs, Canton of Basel-Stadt, Switzerland

The Forum consisted of three sessions; one where youth activists had a chance to present their work and reflections, and a second session where more experienced leaders presented their work and sentiments on peace, the climate, nuclear disarmament and the pandemic. The third session hosted the PACEY Plus Award.

The event’s main purpose was to have an intergenerational dialogue on the aforementioned issues, as there is great value in hearing the perspectives across generations, aspiring to bridge their knowledge, experiences and skills to generate shared meanings and to build a more peaceful, just and sustainable world. Over 250 youth activists and civil society representatives from 45 countries, covering all continents except Antarctica, participated in the forum – to all of which we say Thank You!

The over 4 hour long event is now available here. And for those who prefer reading over listening, we have a short summary of what has been discussed:

In the first presentation of the day, Ms Marzhan Nurzhan, co-convener of Youth Fusion, firstly introduced the network. Youth Fusion has the goal of informing, educating, connecting and engaging fellow youths from around the world, focusing on youth action, intergenerational dialogue, building the links between disarmament, peace, climate action, sustainable development and the reconstruction of a stronger and more resilient society after the pandemic. Nurzhan views young people as the key actors in bridging the intergenerational gap within the nuclear disarmament field to work towards our common future. Anyone can join the network here.

The founder of Children for Peace, Ms Divina Maloum, was second among the youth speakers. Maloum spoke about the importance of involving children in the peacebuilding process, as well as their vulnerabilities. She quoted former Secretary General Kofi Annan on his statement towards children in armed conflict, “children depend, even more than adults do, on the protection afforded in peacetime by family, society and law”. Maloum believes that children are key stakeholders in peacebuilding and are capable of driving societal transformation and asserted that we must invest in children to promote and foster peace, democracy and human rights.

Finally, Ms Marie Claire Graff, the leader of the Swiss Youth Climate was also among the youth speakers. Graff is not directly from the nuclear disarmament field, however, the intersection between climate action and nuclear disarmament was a key highlight during her presentation. Graff claims that climate change is a ‘slow moving nuclear weapon.’ She believes that the climate movement can incorporate more issues, thus leading to more collaborations with other organizations and movements, working together to tackle the root causes of climate change, as well as nuclear armament.

Prof. Dr von Weizsäcker, the Honorary President of the Club of Rome and the first speaker of Session 2, focused heavily on climate change, claiming that youth action is absolutely necessary,  stating that it has even impressed the president of the European Commission, Ursula von der Leyen, prompting her to administer the New Green European Deal. Von Weizsäcker has further shared some interesting details of Come On!, a book co-written by himself and Anders Wijkman. In fact, Come on! has multiple meanings. One in which it means, ‘C’mon! you can’t tell me the current trends are sustainable!’ and second meaning, which proclaims, ‘C’mon! Join us on an exciting journey towards a sustainable world!’.

Following his explanation of the book, von Weizsäcker stated that humans are good doctors when it comes to diagnosing global warming as a toxic disease, but we are rather bad doctors when it comes to recovery. Simply put, there needs to be massive changes in agriculture, energy, transport, the circular economy, the financial market and tax systems if we want to see impactful change to ensure a sustainable future.

Baroness Sue Miller, pulled on some threads from Maire Claire Graff’s talk, encompassing the true meaning of intergenerational dialogue, and discussed the connections between global privilege and nuclear disarmament. Baroness Miller made the link between nuclear states’ ownership of nuclear weapons, namely the UK, and patriotism, claiming that young people are a key part of getting over that feeling and that sentiments towards nuclear disarmament will only come from the youth. Baroness Miller also remarked that, “sometimes when I’m in the UK, if I’m just with my generation, sometimes I feel a bit depressed about this issue, but then when I hear the sorts of presentations that we’re having this afternoon, and I see the energy of young people to overcome these issues, then I feel very hopeful”.

Ms Maria Espinosa, the president of the UN General Assembly during its 73rd session opened her talk by stating, “I am deeply convinced that the role of youth can help us to better cope with these unprecedented global challenges”. Ms. Espinosa claimed that young people are more cosmopolitan, internationally oriented, express more environmentally and sustainably political positions, reject xenophobic or nationalistic ideas, and are better networked. Ms. Espinosa also explained that young people are concerned about self preservation, in that they are the ones who are going to be facing the consequences of today’s decisions. Therefore, it is imperative that young people are part of decision making processes.

Ms. Espinosa pointed out that efforts towards disarmament should make full use of the power, commitment, the voices and agency of young leaders as intergenerational decision making has proven to be extremely efficient and powerful as the youth have the traction, the knowledge and  legitimacy to act. Lastly, Ms Espinosa conveyed the importance of collective leadership from all paths of social life. Collective, intersectional and intergenerational leadership is direly needed to help build back a better society after COVID-19.

In the final session, the participants watched presentations of the six finalists of the two PACEY 2021 Youth Awards, a global prize supporting youth-led initiatives for peace, nuclear abolition and climate action.

“We received nominations of many inspiring youth projects and project proposals from around the world,’ says Ms Marzhan Nurzhan, Deputy-Director of the Basel Peace Office and Co-convenor of Youth Fusion. “The six finalists are just a sample of the quality and level of youth action on these important issues for humanity and the planet.”

There are two categories of the prize: a European based project and a Beyond Europe project. Both winning projects receive €5000 each for their project development, plus other implementation support from the Basel Peace Office and Youth Fusion.

The finalists of the European based project were:

The finalists of the Beyond Europe project were:

“Young people around the world are standing up to demand policy progress on the climate crisis, nuclear abolition and ending war,’ says Prof (em) Andreas Nidecker MD, President of the Basel Peace Office and founder of the PACEY Award. ‘They clearly see the threats to current and future generations and are taking action.” To watch the finalists’ presentations, follow this link.

In our eyes, all of the finalists presented extremely well thought through projects which deserve a world-class recognition. However,  after a democratic vote, the winners were clear:

Towards the enforcement of the right to peace and World’s Youth for Climate Justice.

Towards the enforcement of the right to peace is a project of the Platform for Peace and Humanity (Slovakia) to establish a Global Coalition of Youth Ambassadors for the Right to Peace, which will advocate in countries of the ambassadors as well as at the UN to strengthen the Right to Peace as a human and legal right.

World’s Youth for Climate Justice (Global) is a youth-led campaign to achieve an advisory opinion of the International Court of Justice on obligations to reduce carbon emissions to protect current and future generations.

Youth Fusion would like to congratulate both winners. To read more about them and the PACEY Awards, click here.